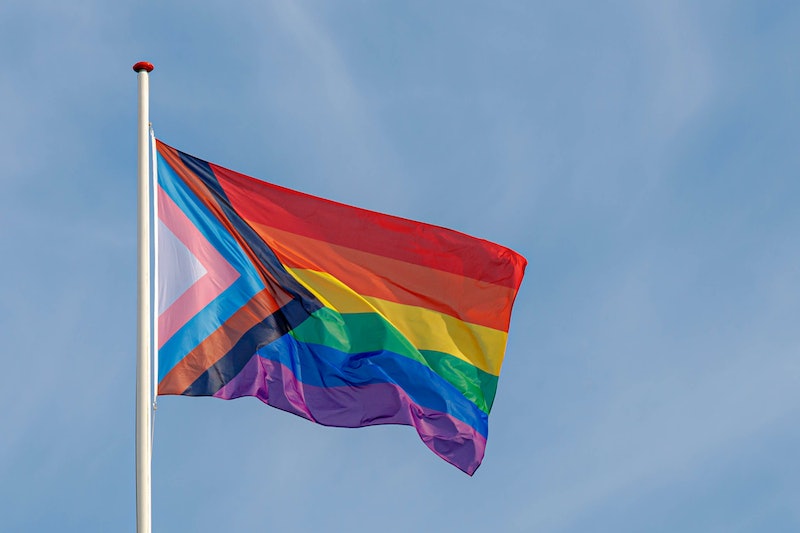 On Jan. 31, 2021, LGBT+ Rights Ghana launched a brand new "safe space" for members of the country's queer community. However, a few short weeks after, the Accra-based community centre was raided by Ghanian national security and forced to close. Members of the initiative say they were threatened and still feel unsafe now. The distressing incident has sparked solidarity posts on social media urging allies to speak out against homophobia in the country. As international outrage ensues, here's how to support the queer community in Ghana.

What Happened At The Ghana LGBT+ Rights Centre?

LGBT+ Rights Ghana describes itself as a movement of lesbian, gays, bisexuals, transgender, intersex, queers, and allies "championing for the freedom for LGBT+ persons" in Ghana, where homosexuality is still outlawed and punishable with up to three years imprisonment.

The non-profit human rights organisation opened its community centre in January this year to offer resources such as counselling, workshops, and paralegal services.

Sadly, within weeks of opening in a non-disclosed location in Accra, the new office had been raided. The organisation posted the news to Instagram on Feb. 24 alongside footage of the raid.

"This morning, our office was raided by National Security. A few days ago, traditional leaders threatened to burn down our office but the police did not help," they said in a post to Instagram. "At this moment, we no longer have access to our safe space and our safety is being threatened. We call on all human rights organizations, and allies to speak out against this attack," they added.

The incident provoked a group of more than 100 Ghanaian feminists to release a statement in support of LGBT+ Rights Ghana, condemning the "trend of moral panic led by the media, religious groups, and political figures." They added: "Whenever queer Ghanaians demand rights, respect, and safety in our own country, these leaders use the guise of morality and concern to push a violent agenda."

How Has LGBT+ Rights Ghana Responded?

Despite opposition from religious groups and the government, LGBT+ Rights Ghana has maintained that there's "nothing illegal about the centre."

Speaking to Reuters, LGBT+ Rights Ghana director, Alex Kofi, said he did not expect "such an uproar."

He explained: "We expected some homophobic organisations would use the opportunity to exploit the situation and stoke tension against the community but the anti-gay hateful reaction has been unprecedented."

For now, the centre will remain closed as community safety is now the company's main priority, however, Donker stresses that the organisation would not be giving up the fight for human rights.

As LGBT+ Rights Ghana posted to social media this week: "While this unfortunate incident has happened, we wish to encourage all our members, and queer Ghanaians to stay calm. Do not panic. We will triumph. The police may have raided our office, and closed it down but the real office is in our hearts, and minds."

How To Support LGBT+ Rights Ghana

For LGBT+ people in Ghana, the community centre's raid speaks to the ongoing discrimination, violence, and censorship they face in the country. Ghana is a largely religious and conservative country and anti-gay rhetoric is common at a government level. As Reuters explains, while Ghana has not prosecuted anyone for same-sex relations in years, "LGBT+ people face frequent abuse and discrimination, including blackmail and attacks."

So how to help here in the UK?

Via GoFundMe, LGBT+ Rights Ghana has set up a Community Support Fund "designed to support and empower members of our beloved LGBTIQ community who are financially constrained in Ghana."

As the organisation explains, the initiative is "a long term support system intended to address the struggles of a fast growing LGBTIQ community in Ghana" and aims to "ultimately support a wider community through business initiatives and other capacity building auxiliaries."

You can donate to LGBT+ Right Ghana via this GoFundMe page.