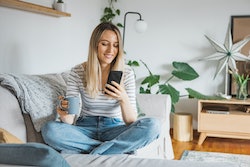 If you’ve ever been on the fence about an online purchase and needed some truthful reviews, you may have referenced the ever-honest users of the bird app. Despite this, Twitter is rarely seen as an e-commerce hot spot (save for the occasional product placement under viral tweets) — unlike on Instagram, where shopping is now part of the main menu bar. Thanks to the recent debut of the Twitter Shops feature, shopping on Twitter will no longer be exclusive to word-of-mouth reviews or businesses riding the coattails of viral tweets. Instead, the app just might be your newest go-to for online shopping.

Though window-shopping on a text-dominant app might be hard to picture, Twitter’s interface arguably makes for the most consumer-friendly shopping experience. Just as many of us might head straight to the reviews of a listing to figure out the truth about a product, you might have searched a product on Twitter in the past for users’ truly unfiltered reviews. And, knowing the often blunt behavior ascribed to Twitter users, you can likely expect to see some very honest reviews if a product isn’t up to par with its description.

“People are already talking about products on Twitter,” product managers Justin Hoang and David Lie-Tjauw wrote in a Twitter blog post announcing the launch on March 9. “We want Twitter Shops to be the home for merchants on Twitter where they can intentionally curate a catalog of products for their Twitter audience and build upon the product discussions already happening on our service by giving shoppers a point of action where a conversation can become a purchase.”

Twitter Shops’s interface will optimize the ability to cross-reference products in this way. Users can view a merchant’s profile and replies, search for mentions of their products, and scroll through listings of their products complete with images and pricing all in one place. If you’re ready to turn your next Twitter scroll into a shopping spree, here’s how to shop on Twitter.

According to TechCrunch, Twitter Shops is currently only available to users in the U.S. with an iOS device operating in English. In order to access the Shop feature, you’ll need to head to the profile of one of the merchants that Twitter has selected for its beta testing phase, which so far includes business like @Verizon, @ArdenCove, @LatinxInPower, @GayPrideApp, and @AllIDoIsCookUS, according to Twitter.

Under their followers in their bio, you should see a button that says, “View shop.” Clicking this button will open their Twitter shop screen, where you can browse a gallery of up to 50 product listings — including pictures of the product, its name, and its pricing. While Twitter Shops allows users to browse products, there is no checkout process through the app. Clicking on a product will instead take you to the merchant’s website where you can choose to purchase the product.

If you qualify to use Twitter Shops but are having trouble viewing the feature, try updating your Twitter app, and make sure that you’re viewing a selected merchant’s profile. According to Twitter’s initial announcement, the app is planing to expand the feature to more vendors in the future. The blog post described Twitter Shops as “part of a larger effort to better support professionals of all kinds — from small businesses and creators to big brands — who come to Twitter to do business.”

Now, your daily Twitter scroll can include its usual hot takes along with some hot deals.