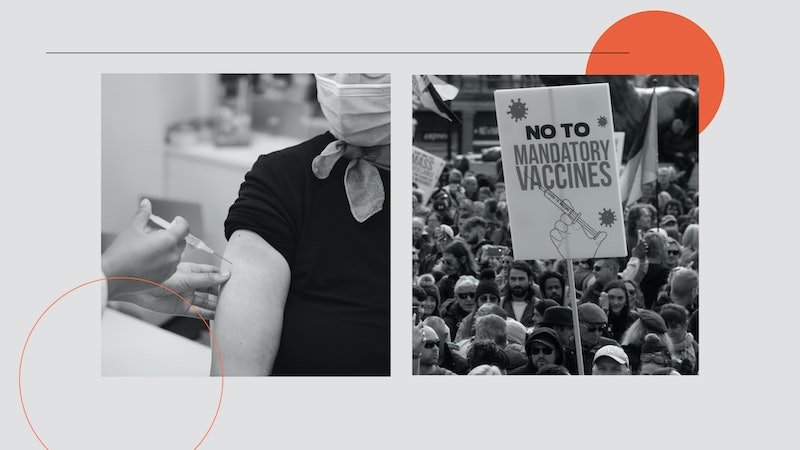 Last week, on the day that Pfizer and BioNTech announced that the vaccine they had been working on was 90% effective, Sophie’s dad knocked on her bedroom door. "Just tell me now that you're not going to get the vaccine," he pleaded. "It's going to cause a lot of damage to people. It's going to be like thalidomide, when babies were born without limbs and stuff," he added, trying to convince his daughter. Sophie, 24, nodded and promised. She just cannot be bothered to argue anymore.

Her dad has been an anti-vaxxer for as long as she can remember, and he often sends her content that she is both amused and unsettled by. "He shares these weird conspiracy videos and mock-up pictures of men growing vaginas and women growing penises that say ‘This is what's going to happen if you have the vaccine’," she tells Bustle.

Sophie’s dad’s taste in conspiracy memes might be a bit niche, but his beliefs are definitely not. The anti-vax movement – which dates back to the late 18th century, when the smallpox vaccine was invented – has only been fuelled by the COVID-19 pandemic. The recent vaccine breakthroughs have led to a fresh influx of anti-vax arguments and conspiracies, from questions about the process being rushed to accusations that Big Pharma wants to insert microchips in people.

Reports suggest that between 70% and 80% of the world’s population needs to be vaccinated for the pandemic to end, so this widespread scepticism is a growing cause for concern for governments and public health organisations worldwide.

As for those who live with anti-vaxxers, the tensions at home can be incredibly difficult. "When I first saw the news about the vaccine breakthrough my initial reaction wasn’t to rejoice, it was to think 'Mum would absolutely hate this,'" says Jade*, 20, whose mother also "suspects that COVID-19 originated in a lab in China, possibly as a bioweapon," she tells us. And although Sophie shares lighthearted anecdotes about her dad's most outlandish theories, she says she dreads the prospect of heated debates around the dinner table.

So, for those who might have to engage in painful conversations with anti-vax friends and family members over the coming months, we spoke to two experts on the subject – Erica Weintraub Austin, professor and director at the Edward R. Murrow Center for Media and Health Promotion Research; and Jonathan M. Berman, author of Anti-vaxxers: How to Challenge a Misinformed Movement – for their advice on how best to approach it.

Understand where their fears come from

The first step towards building dialogue is to understand that vaccine scepticism is not completely unfounded. Austin explains that in the past, governments across the world forced vaccines on people and distributed medications with terrible side effects. "And of course, that is the opposite of how you build trust," she adds.

Berman argues that in addition to mistrust in science, "basic fears about personal autonomy" also contribute to anti-vax attitudes. Anti-vaxxers’ anxieties are partly rooted in historical facts and in the very human fear of the unknown, and understanding that lays the foundation for a productive conversation, based on compassion rather than contempt.

Listening to the concerns – whether justified or not – of the anti-vaxxers in your life will only get you so far. Then comes the tricky exercise of challenging their convictions. "We tend to get really defensive about information that is not consistent with the beliefs we already have," says Austin. She also suggests that emotions, rather than factual evidence, tend to inform people's decisions about their health.

Not only are anti-vaxxers likely to care about their local community, but they are also more likely to trust them than the people that exist outside of their personal and social networks. "Some of the most successful vaccination campaigns involve local religious leaders, local community leaders and local news outlets," says Berman. "There’s a human tendency to want to believe things from people we see as being like us," he explains.

The best way to get your anti-vax family member to listen to the facts could be to direct them towards local news sources that they will probably deem more trustworthy than a big national or global outlet. If it feels relevant to the geographic, socio-economic, and cultural context within which they operate, they will more readily embrace it.

Be supportive, not patronising

Finally, always tread carefully. Make sure that when you mention scientific evidence to back up your argument, you do so in a way that isn’t belittling. "There’s an issue of elitism. People in science and medicine are sometimes seen as talking down to people, instead of talking with people. And what we really need to do is have conversations," says Austin.

Berman, who dated an anti-vaxxer a few years ago, believes that successfully communicating with a vaccine sceptic is ultimately "a matter of seeing someone as a whole person"; someone who deserves to be listened to, reassured, and appropriately challenged. Someone whose mind, with the right approach, can be changed.

*This name has been changed to protect the individual's identity.