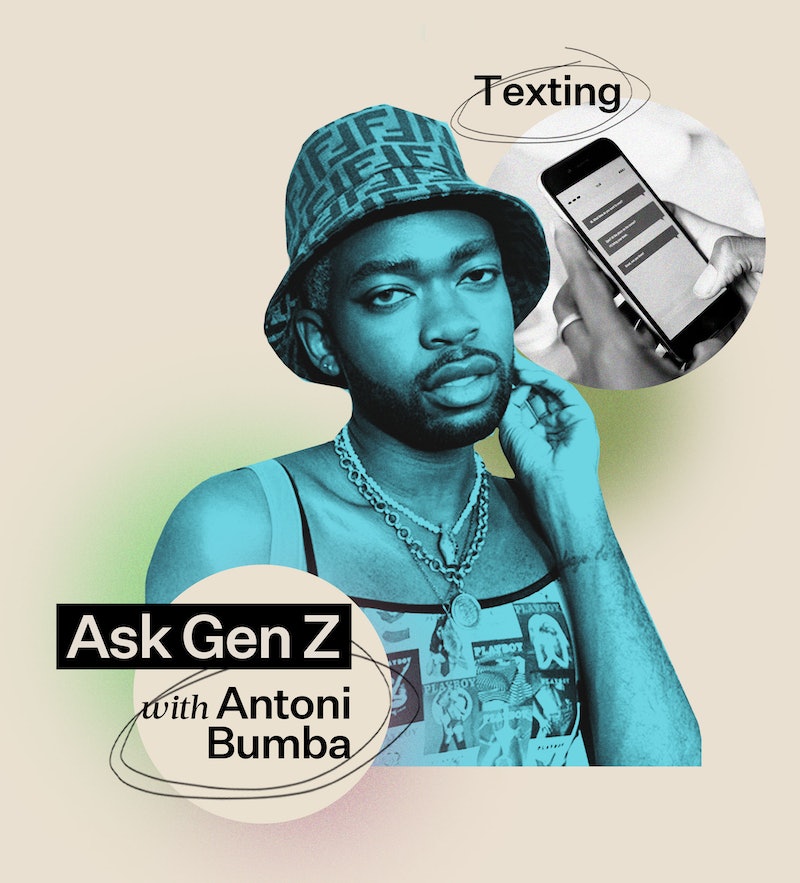 Once upon a Y2K, millennials were the masters of cool when it came to netspeak — they didn’t need to ask anyone how to text better. They could have entire conversations with barely any words at all: sup? nmu? jc. But somewhere between AIM and DM, the generation lost its edge and became defined by its cringeworthy texting habits, from too many caps to an overreliance on the laugh-cry emoji, a behavior Gen Z derides as wholly cringe.

According to Antoni Bumba, a Discover List TikTok creator with more than half a million followers who’s known for their acerbic pop culture commentary, poor texting skills can invite some severe character judgments. “If someone uses the laugh-cry emoji, it’s like, OK, I’m questioning your sense of humor. No one laughs like that.” That said, the 23-year-old adds, millennials have way more ticketable texting offenses than awkward emoji usage and the sometimes-cringe GIF.

“Millennials can come across as cold,” Bumba says of the vibe they give off in digital correspondence. By adopting some of Gen Z’s more casual and personable texting habits, they say, millennials can express themselves in a way that “matches their actual feelings in the moment rather than what they think they should say.”

Below, Bumba tells Bustle how to bring emotion into your texting game without increasing your word count.

I often notice Gen Z doesn’t capitalize texts. What kind of message does that send compared with, like, regular capitalization?

I’ve had my phone in automatic lowercase for years. It used to be an aesthetic thing, dating back to the Tumblr days, but now it’s just the standard for texting because it’s casual. Using proper capitalization is just aggressive. Gen Z is really sensitive and when people capitalize the start of sentences it creates a strict tone of voice, and it’s like, “Whoa, why are you screaming?”

If you’re sending a work email, use proper capitalization. But all caps are a no unless it’s completely obvious that you’re not mad. I’ll use all caps to say “SCREAMING” if I’m really excited or surprised. You can also use all caps if you misspell a word, I’ll say “LAUGKLHING” to convey that I’m laughing hysterically — too much to spell it properly.

If we can’t use the laugh-cry emoji anymore, what can we use when something is funny?

I’ll do the crying emoji with the skull and crossbones. When it comes to using emojis as a reaction for the response, we use emojis that directly express how we feel instead of emojis that we think we should use based on the circumstance. The laugh-cry emoji is generic. It’s not a representation of how anyone is reacting, which is why we don’t use it.

Back in the AOL days, if you typed LOL you might actually be laughing out loud. But now, it means you’re being passive-aggressive or have nothing to say. So you can use it, but not as a response to something you find funny because it doesn’t make you sound amused. I’m more likely to say LMAO — spelled out, el-em-ay-oh — in person where I can control how it’s conveyed.

Are voice notes useful or annoying?

I use voice notes because I hate typing and I hate reading — it’s a lot of work and makes me feel like I’m in school. I prefer to just hear what someone has to say on my own time. I can press play and walk away from my phone and fold laundry. But a lot of people get anxiety about their voice, so they don’t like to use them.

We live in screenshot era. The voice note can be deleted after two minutes, unless someone keeps them, in which case, you’ll want to ask them why they’re keeping it. If I’m really spilling the tea, I’ll make a phone call. But when I’m talking to someone I’m not very close with, I might worry they’re screen recording the FaceTime or taking an audio recording of the call.

Does this awareness change the way you use your phone?

What you see is what you get with me, so I don’t edit my phone. But some people get nervous about other people holding their phones. People get notifications for all kinds of things, so you never know what’s going to pop up, which could be very embarrassing. To Gen Z, a phone is an extension of the brain, which makes them protective over it, like a diary.

Back to texting: How do you feel about emoji reactions in a convo?

How do you keep a conversation going when the other person isn’t engaging?

I pull out a random experience that happened to me so that we can talk about something. Like, “OMG, a pigeon just pooped on me, but a lady told me that it means good luck.” They’ll either laugh or ask me about it — and then we’re actually talking. If you just ask someone what they’re doing, they don’t really tell you, and it doesn’t go anywhere.

What’s the biggest thing that millennials get wrong about texting?

They don’t realize that speaking too properly — with capitalization or no emotion — makes the other person feel judged. Act how you feel.