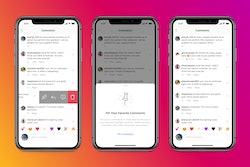 To try out the new feature for yourself, you’ll need to make sure you’ve updated your Instagram app to the latest version. Then, go to the comments section of any of your Instagram posts. When you find a comment you want to pin, just swipe to the left where you've previously seen a handful of options including reporting, deleting, and replying. Now, you’ll see a thumbtack icon allowing you to pin the comment. You’re able to pin up to three comments per post. If you exceed three, a notification will pop up letting you know you’ve already reached the limit. You can also unpin a comment by swiping left on the comment and hitting the thumbtack icon again in order to make space for a different comment you’d like pinned.

When you pin a comment, it’ll stay at the top of the comments thread, intending to make it easier for you to monitor the tone and content of your comments section. But before you start pinning comments willy nilly, be aware that users will get a notification when their comment is pinned. In other words, your Instacrush will be well-aware if you pin their comment complimenting your selfie.

This latest update to the comments section is part of a group of new Instagram features focused on combating online bullying. In addition to pinned comments — a feature that Instagram started testing back in May, according to Mashable — Instagram has been using artificial intelligence to automatically block offense comments. That feature came as an addition to users’ ability to designate certain words and phrases they want to be blocked or filtered out of their comments section.

In late 2019, Instagram began using a similar AI to warn users before posting captions that could be offensive. As far as what qualifies as “offensive language,” the AI technology identifies language that's previously violated the platform’s Community Guidelines. Meaning, if it’s been banned from Instagram before, AI will flag it. So, not only is Instagram working to limit offensive comments that others leave on your posts, they’re also working to make users think twice before writing a caption that may be harmful.

While there is some excitement around the new feature, others in the Twitter thread pressed the platform about other issues they want to be prioritized like Instagram allegedly shadowbanning certain content. (On June 15, Instagram addressed the purported shadowbanning with Instagram CEO Adam Mosseri writing, “The irony that we’re a platform that stands for elevating Black voices, but at the same time Black people are often harassed, afraid of being ‘shadowbanned’, and disagree with many content takedowns, is not lost on me.”)