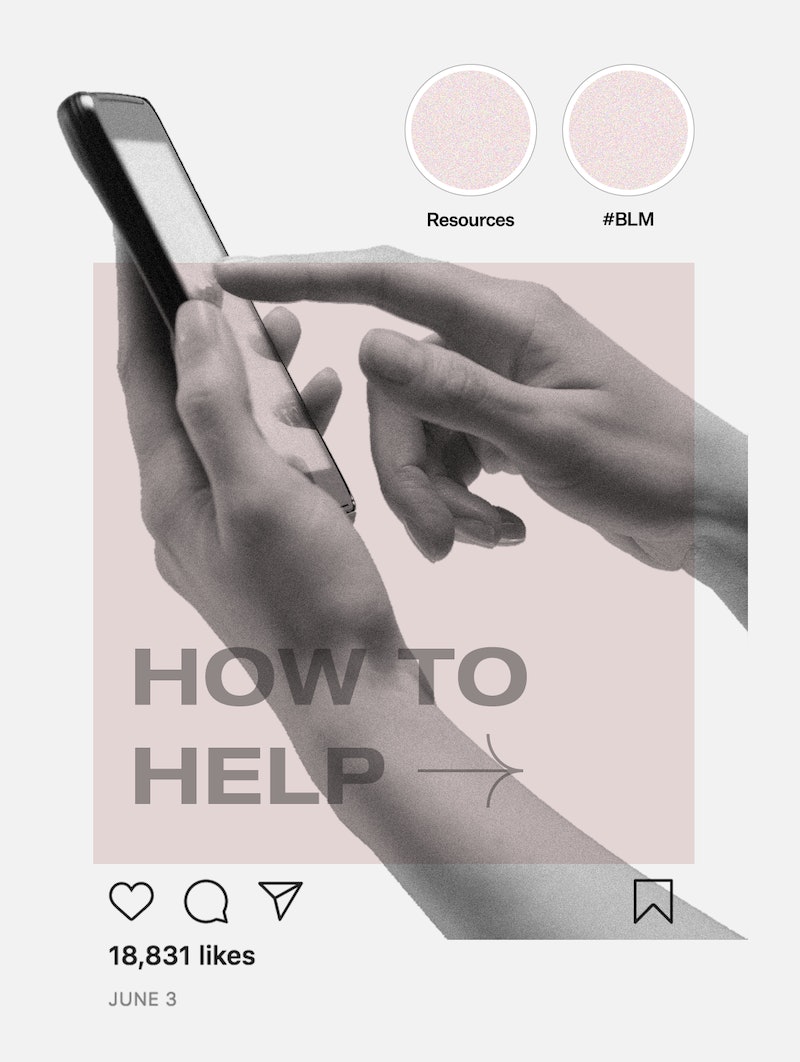 Pastel pink Instagram infographics are flooding our social media feeds in response to the Black Lives Matter movement. From reading lists to quotes by prominent progressives or illustrations relaying underreported events, timelines have become rosy streams of resources. However, given the current political unrest, global pandemic and accelerated climate change, do these new Instagram infographics achieve anything? While substantial societal change is needed, it’s important to separate the helpful from the performative when it comes to digital activism.

It’s safe to assume that most people creating these types of visual resources are aiming to educate in an accessible way, hoping it will inspire others to do further reading, join progressive movements and make meaningful changes – which, in some cases, it achieves. But, it’s worth considering whether these cutesy infographics are also paving way for the commodification of Instagram activism. In other words, the motives of some brands and influencers who are sharing these infographics are questionable, with some just looking to increase likes and followers off the back of progressive movements. They may give the illusion of making change, but without actively committing to it, or addressing their own contributions to the problem, it becomes a case of performative activism or “wokewashing.”

Chrissie, a 24-year-old creative from Buckinghamshire, finds the resources hugely helpful. “I had such a low level of genuine understanding of systematic oppression and historical abuses, that the majority of what people are posting is unfortunately new information to me,” she says. She goes on to say that it’s better that these digital conversations are happening than not at all. “Maybe for some it’s performative, but even then I’d argue that it spreads awareness and encourages people to think about their own privilege and lives, and start actively seeking information to unlearn their conditioning.”

How are these infographics affecting those with lived experiences of racism? Rachel, a lettings manager from London, says: “I’m finding it all very triggering as a Black woman. I’m finding it hard to understand that people are somehow ‘cured’ of their racism in 24 hours. It’s just crazy, where was everyone when Black people were screaming Black Lives Matter before, why is it only now?” She believes many influencers are speaking out because of peer pressure, and says it’s obvious when it’s not genuine. “It’s actually disgraceful how many people have BLM as a highlight on their Instagram accounts. I feel like it’s become a meme.”

Freddie, who works in the food industry and currently lives in Paris, argues that the conversations and education need to be happening offline. “I think it’s performative,” she emails. “I doubt all the people sharing these resources will change. Anyone bringing up the conversation to their family and friends is more likely to be genuinely engaged, rather than having a knee-jerk reaction on social media.” Freddie goes on to say that she believes resources that are specific to people’s immediate environments are more useful than generic blanket statements.

Bad Form Review gained 6,000 followers overnight when Amy, who runs the account, made a reading list of 50 books by Black authors. The post was saved by 40,000 people and shared by accounts with bigger followings, amassing over 100,000 likes in total.

“I’m not looking to create a brand, I just want people to read these books,” Amy told me on the phone. “I feel like I’m feeding into the ‘showy works’. After this post, I decided not to do any more lists, because I’m a white passing mixed-race girl who has no business capitalising from this movement and Black pain.”

Amy is sceptical about the potential for infographics to create real, lasting change. “If everyone who saved that post bought one of the books, you’d see a continued difference in the British or American charts. You only need about 2,000 buys in a week to get in the bestseller charts, and so there’s clear evidence that people are not buying after they’re sharing.” Subsequent posts on Bad Form Review average 200 likes, showing that ongoing engagement with content that supports Black writers isn’t consistent.

On the flip side, LA-based artist Nicole Anderson believes there’s still value in engaging with digital activism, due to the way algorithms work.

Nicole writes: “I am not my most radical friend. I am not who I would turn to for knowledge about these issues. But— I am some of my friends’ most radical friend, and the person in their life they are able to ask for resources. We all have access to the same internet, but everyone is experiencing their own personal internet. Our social groups are overlapping circles, not singular bubbles.” As more and more people create and share these resources, she hopes this will increase the reach to educate those who would not usually come across the information.

To create or not to create?

It’s clear that Instagram resources alone are not enough to make progressive change. This type of digital activism can be problematic, using reductive aesthetics, being performative by nature, and giving brands the opportunity to co-opt movements for their own benefit.

However, some posts are created with better intentions and sensitivity than others. The value lies in the ability of infographics to reach a huge audience, which makes the jobs of activists easier, as it’s more effective to build on familiar conversations than to introduce topics that aren’t usually discussed. Digital activism shouldn’t be seen as the solution or an end goal, but a first step to take the learning offline. And as social media users, it’s up to us to be more critical and intentional with our digital footprints.

More like this
It’s About Time Black Girls’s Voices Were Heard – & 'Girlhood Unfiltered' Is The Start
By Paula Akpan
Iran Has Issued A Death Sentence Over Mahsa Amini Protests
By Catharina Cheung, Darshita Goyal and Maxine Harrison
How To Switch Back To A Personal Instagram Account From A Professional One
By Alexis Morillo
Heinz Just Relaunched A Bean-Tastic '90s Fave
By Sam Ramsden
Get The Very Best Of Bustle/UK