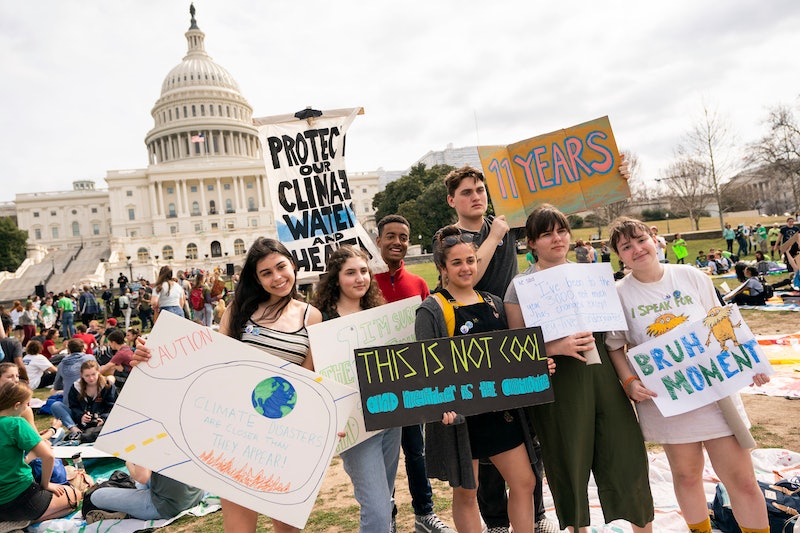 From the Sunrise Movement to March For Our Lives, Generation Z has grilled their lawmakers on climate change, successfully advocated for gun control legislation, and impressed the world with how deftly they use social media to amplify their message. And a recent study from Irregular Labs, a Gen Z-led think tank, underscores just how central political and social activism is to how Gen Z views itself both here in the United States and around the world.

“The fights that we're fighting now — whether they be for gender equity, trans rights, immigration rights, just human rights in general —most of these fights are not new,” Sage Grace Dolan-Sandrino, an 18-year-old LGBTQ activist, tells Bustle. “But now our fights ... are made possible in ways that were not possible before.”

The Irregular Labs survey, which was was conducted "in 7 countries, including the United States, United Kingdom/Germany, India, China, Brazil, and South Africa, among nationally representative samples of 300 girl and GSM [gender and sexual minority] Gen Zs in each country," found that 75% of respondents said being politically or socially engaged is very important to their identity. In addition, 63% said they primarily informed themselves about social and political issues through social media channels.

As intensely political and technologically savvy as the study paints Gen Z, it also suggests this is a generation striving to do more. It found that signing petitions and participating in a movement on social media are the actions Gen Zers have taken the most to be politically or socially engaged; fewer respondents had donated money to a political, social justice, or humanitarian cause, participated in a protest, or volunteered with an organization. When asked about the obstacles keeping them from participating in political or social justice causes, 55% said not knowing who to contact or what groups to support tripped them up. So it's clear that members of Gen Z are eager to get involved beyond liking and retweeting — they just need to know how.

Gen Zers who've already made waves in political circles offer a road map for their peers to get more involved in activism. Dolan-Sandrino and Sarah Chadwick, a co-founder of March For Our Lives, agree that social media defines their generation. They say Gen Z finds community, voices their opinion, and organizes protests particularly through Twitter and Instagram.

“It's really important to remember that [social media] increases access,” Dolan-Sandrino says. “It allows people to become activists in ways that they couldn't before. So that could be, you know, creating digital art or running an online forum.”

She adds that social media can be a particularly powerful way for people who feel at risk to organize around the causes they care about.

“For people in the queer community and specifically queer trans people of color, our safety is always at risk because of who we are, because of our identity," Dolan-Sandrino says. "So being able to separate our physical appearance and physical identity from our online and activist identity definitely does put another layer of safety."

There’s an ease to using social media that Dolan-Sandrino views as both a benefit to and a drag on activism. There’s a million ways to voice an opinion, and showing support for a cause can be as simple as a click. But that ease of getting involved brings with it the fear that social media doesn’t actually further social justice and political causes. Critics deride digital support as "clicktivism," arguing that it doesn’t translate into tangible change.

“If you're only an activist online, you're kind of deemed a lazy activist,” Chadwick tells Bustle. “But March For Our Lives had a huge following on social media. And that following also translated when the march took place. You saw everyone who was retweeting our tweets, they actually came out to the march.”

March For Our Lives, which drew an estimated crowd of more than 200,000, serves as evidence that Gen Z’s activism isn’t restricted to a screen — they’ll show up when it matters and prove critics wrong. But participating in a protest is just one of many ways to engage with a cause.

“Activism looks different for every single person, and you can be an activist in any way that works for you,” Dolan-Sandrino says.

Whether Gen Zers' talents are singing, dancing, graphic design, or writing essays, Dolan-Sandrino points out they can make a real difference by creating any work that is inclusive or advocates for a cause. For those who aren't so artistically inclined, she recommends looking up local organizations to donate or volunteer their time to, or else starting a club at their high school or college.

“It all just comes down to local activism,” Chadwick says. “It's all about in local communities, because that's where you can really make the most change.”

“I have nothing but excitement for what the world is going to look like,” Dolan-Sandrino says. “Young people today are putting up with less and less, yet at the same time creating room for more and more, which I think is the best combination.”

More like this
Watch The Trailer For Netflix’s Edgy New Comedy 'FAKES'
By Brad Witter
10 Must-Read New Books Out This Week
By K.W. Colyard
I've Read The Harry Potter Books 30+ Times & This Plot Hole Haunts Me
By Kelsey Stiegman
Candice Brathwaite Is Over Using Her Own Life For Material
By Shahed Ezaydi
Get Even More From Bustle — Sign Up For The Newsletter