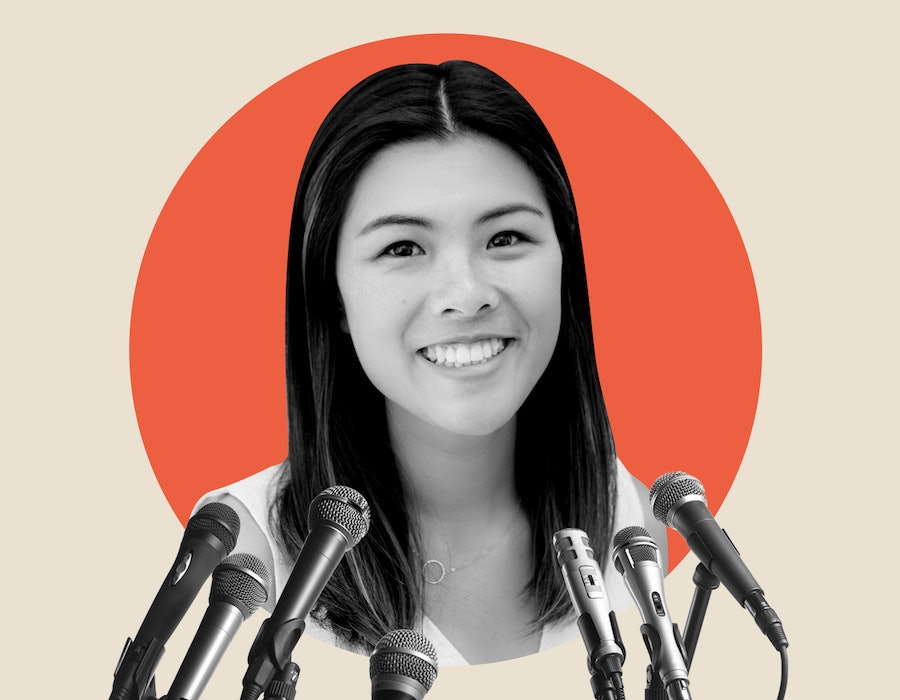 In Bustle's Quick Question, we ask women leaders all about advice — from the best guidance they've ever gotten, to what they're still figuring out. Here, Instagram's software engineering manager Allis Yao tells Bustle about the challenges she faced after a recent promotion, the role of Stories during a pandemic, and her advice for women of color pursuing tech.

Like many of us, Instagram's software engineering manager Allis Yao, who's responsible for some of your favorite Story features — like Donation and Quiz Stickers — didn't expect to be working from home for long. "When I returned to the office in March to get my monitor, I thought 'Maybe it'll just be three or four weeks,' so I left the plants on my desk, but they're for sure gone now," Yao says with a laugh.

With the country spending more time on Instagram during the pandemic, Yao's work is taking on a new meaning lately. "It's important now more than ever for people to be able to connect with each other to not feel so isolated at home," Yao tells Bustle. "We've also seen a huge rise in social activism, and Stories gives people an open platform to share their opinions and make their voices heard."

Yao, who's been at Instagram for a little over two years, was recently promoted from software engineer to software engineering manager, which she describes as a bigger purview of what the entire team is working on. "With Stories, you're either sharing personal, more light-hearted things or sharing your opinions on important issues," Yao says. "One of the big things we're thinking about is making sure that both can exist on the platform well."

On the heels of Instagram's 10-year anniversary, Yao shares her favorite way to de-stress, how she combats imposter syndrome, and why women should ask for exactly what they want in the workplace.

How do you unwind and recharge, especially since your role requires staying plugged in?

AY: Headspace is a nice way for me to start the day because when I wake up, my mind is running through the 50 tasks that I need to complete that day. After work, I love spending time outdoors and working out. I'll actually leave the San Francisco Bay area to go on road cycling rides or long runs. When I'm working out, I feel like it needs to be more pump-up music, so I like curating my own Spotify playlists.

What's the biggest challenge you've had to overcome in your current role?

AY: Due to my promotion, I'm sitting in virtual rooms with a lot of white men most of the day, so there's definitely this idea of, "I don't want to seem inexperienced, even though I'm new to management." A lot of times in these bigger meetings, I realize I'm scared to ask these "dumb" questions, but what I've started to realize is that nobody has all the answers. There's actually another female engineering manager, who's been a great mentor and she's been telling me, "No, you should speak up. Everyone values your opinion, especially because you see things from a different perspective." Every time, I've raised a question, people in the room have responded with, "Oh yeah, let's think about that."

Communicate what your career goals are to the people around you and your manager, because the worst thing someone can say is no or it's not the right time.

How do you handle imposter syndrome?

AY: Honestly, it's something that I still battle with today. You just have to wake yourself up and be like, "Hey, I can deal with that." Surrounding yourself with allies is a big one for me. There's a group of women that I'm very close to from post-college. When we tell each other our problems, the group will call it out and say, "Hey, what you're saying is imposter syndrome. You can do it."

AY: Ask for what you want in your career. A lot of times I see people, especially women, working very hard, hoping their manager or somebody will notice and want to promote them or tell them what to do next in their career. Communicate what your career goals are to the people around you and your manager, because the worst thing someone can say is no or it's not the right time. By telling people around me what it is that I might want to try next or what my career goals are, I've actually had managers make me aware of different opportunities.

What's your advice for women of color entering tech?

AY: A lot of people are scared to enter the industry because it's so male- and white- dominated, but don't be afraid to just try things in the field. I've seen a lot of younger women, myself included, who are scared to try something new due to the very real fear of failure. Whenever I want to attempt something new, I don't think, "How can I build something from the ground up?" You don't need to reinvent the wheel. It's better to reach out to someone who's already handled the issue you're facing at the moment and ask them for advice.