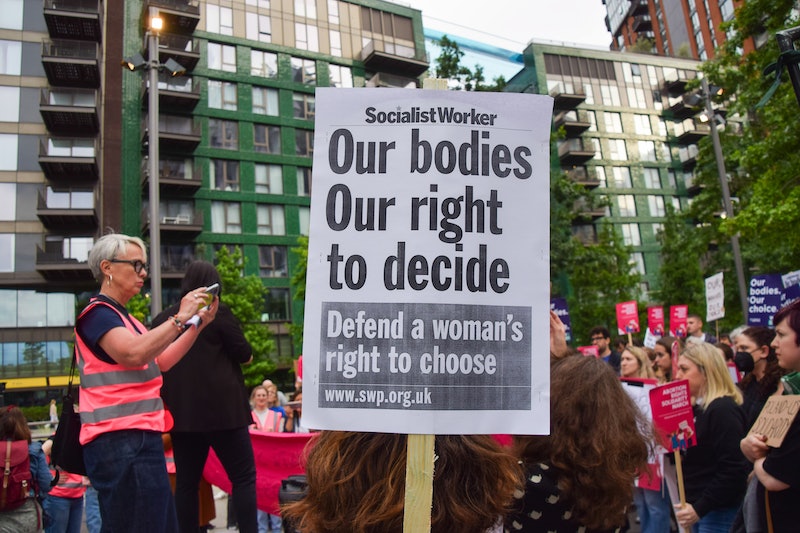 On June 24, the United States Supreme Court overturned two landmark decisions on abortion rights – Roe v. Wade and Planned Parenthood v. Casey. As a result, women in Texas had their right to terminate a pregnancy stripped, and with many other states now set to follow suit, women across the U.S. are fearful over what lies ahead.

And the same goes for people worldwide, including in the UK. Campaigners have warned that anti-choice groups "with strong links to their U.S. counterparts" could attempt to impact abortion rights far and wide. But, as it stands, is abortion legal in the UK in 2022? Below, find out what abortion laws are in place.

Under the 1967 Abortion Act, women can have an abortion up to 24 weeks after approval from two doctors who "must agree having the baby would pose a greater risk to the physical or mental health of the woman than a termination," per BBC. According to the British Pregnancy Advisory Service (BPAS), an abortion can legally be carried out if there is a "substantial risk" to the baby if it were to "suffer from physical or mental abnormalities." It is also legal to terminate a pregnancy because of social or financial circumstances.

Abortions can be carried out after 24 weeks, but only if a woman's life is in danger or if they are "at risk of grave physical and mental injury,” as well as a "severe foetal abnormality,” as reported by BBC. Abortion is available under the NHS in England, Scotland, and Wales. However, women living in Scotland and Wales may face limited services.

Despite women being allowed abortion access in England, Scotland, and Wales, it's still a criminal offence for one to self-induce a pregnancy termination. Under the 1861 Offences Against the Person Act (OAPA), a woman can be charged a maximum life sentence if termination is self-induced by "procuring abortion medication and inducing an abortion by any means," according to Novara Media.

Scottish women are legally entitled to an abortion under UK law, but there aren't enough services available. According to The Guardian, health boards in Scotland don't always provide abortion services up to 24 weeks. In some areas like Fife, abortions are reportedly carried out up to 15 weeks. Instead, Scottish women are expected to travel long distances to clinics in England as far as Bournemouth, per The Scotsman. While the NHS does pay for travel expenses, friends and family seeking to provide support have to pay for themselves.

The Scotsman also notes that while the government became the first country in the UK to implement a Women's Health Plan in 2021, "there are no plans to secure a fit-for-purpose abortion framework for those requiring second-trimester abortions."

While UK laws apply in Wales, abortion services are only available for up to 18 weeks. Those over the threshold "will be referred onto the British Pregnancy Advisory Service (BPAS) for alternative services in England," according to NHS 111 Wales.

Abortion was decriminalised in Northern Ireland in 2019, giving women "unrestricted access to abortions up to 12 weeks," per the Financial Times. This came into effect in March 2020. Terminations up to 24 weeks are allowed "if the risk of physical or mental harm outweighs the risk of abortion" and can be performed later than that "if the mother could die or the foetus is unlikely to survive."

It's worth noting that the Republic of Ireland, a Catholic country, made abortion legal a year earlier in December 2018. Under their law, abortion is permitted up to 12 weeks of pregnancy. Abortions can only be carried out after that threshold if there is a risk to the life or health of a woman or "where there is a condition likely to lead to the death of the foetus before or shortly after birth," per the British Pregnancy Advisory Service.

However, the Department of Health has yet to fully implement full access to abortion services in Northern Ireland. Many women still have to travel to England, Scotland, and Wales for an abortion.

In May 2022, Northern Ireland Secretary Brandon Lewis issued a written statement to the House of Commons, which read: "I am determined to ensure that women and girls in Northern Ireland can access abortion services in the same way as those living in the rest of the United Kingdom."

Lewis called the Department of Health's inaction "entirely unacceptable" and said he would intervene further if they do "not commission and fund abortion services as directed."