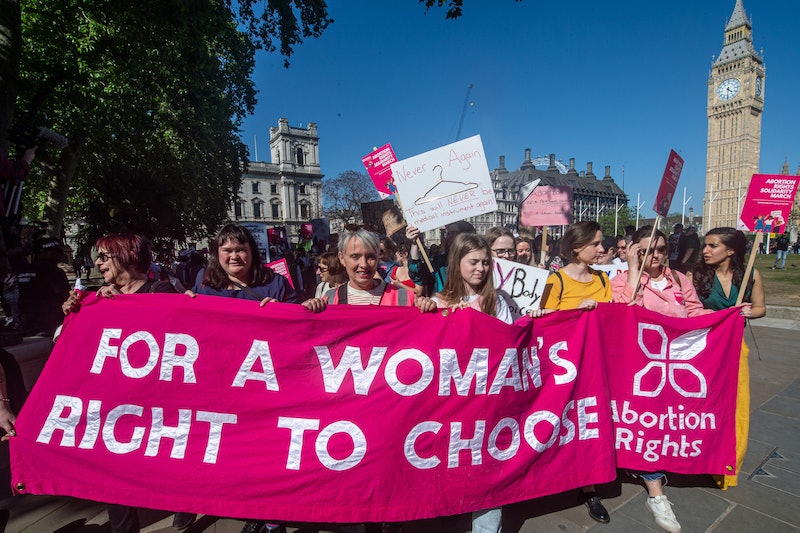 Following the announcement of Roe v. Wade being overturned on June 24, many British and Irish celebrities have taken to social media to condemn the ruling. “Banning abortion doesn’t stop abortion. It stops safe, legal abortion,” Bridgerton’s Nicola Coughlan wrote on Instagram. Meanwhile, Harry Styles shared his disbelief on Twitter, encouraging his followers to check on their friends and look out for one another. “We’re all in this together, and the fight is just beginning. A truly dark day for America,” he wrote.

Little Mix’s Leigh-Anne Pinnock described the decision as “utterly petrifying” on her Instagram stories, while Jameela Jamil shared several posts about the situation. “We can vote our way out of this. We can vote our way back to progress,” said the British actor and activist, who currently lives in Los Angeles. “We have two years to save the future of the USA. You in?”

While people in the UK can’t vote in the U.S., they can make a difference in other ways. From raising awareness of help services to making a monetary donation, below are just some of the ways you can stand in solidarity and show your support.

If you’re in a position to do so, you can donate to some of the services offering help and advice to those directly affected by the Supreme Court ruling.

As a reproductive health care provider, Planned Parenthood has over 600 clinics in the United States that provide abortion services as well as birth control, testing and treatment for STIs, and cancer screenings.

The National Network of Abortion Funds aims to “remove financial and logistical barriers to abortion access” by providing financial support as well as transportation, childcare, translation, and accommodation.

This national-state partnership focuses on “lifting up the voices of Black women leaders” in the fight to “secure Reproductive Justice for all women, femmes, and girls.”

This service provides “nonjudgmental, after-abortion support” by giving people a platform to talk about their experience of having an abortion.

Keep Our Clinics is a campaign led by the Abortion Care Network “to fund and support independent clinics to continue providing life-saving abortion care.”

Signing petitions is a great way to show your support and help affect change. As for what you can sign in the UK, the British Pregnancy Advisory Service has called for Liz Truss, in her role as Secretary of State for Foreign, Commonwealth, and Development affairs, “to send a clear signal that the UK does not support the removal of a woman’s right to access abortion care, and to commit to protecting UK funding for reproductive health and rights programmes globally.”

By following social justice accounts like @impact, @so.informed, and @_theegalitarian, you can continue to learn about what this decision means, and share the information you gather with family, friends, and followers on social media. By staying informed, you can help keep the conversation going while standing up for reproductive rights not just in the United States, but globally.

It’s also important to share safe abortion resources for those in “at-risk” states, whether they be people you know or strangers. donations4abortions.com has a number of links to organisations and services in states where abortion is still legal, as well as travel funds.

4. Support abortion rights in the UK

Campaigners have warned that the decision to overturn Roe v. Wade could impact UK abortion rights, per Marie Claire. Over the past decade, the country has “seen a number of parliamentary bids to restrict abortion safely and legally,” explained Katherine O’Brien, associate director at the British Pregnancy Advisory Service. “These groups have strong links with their U.S. counterparts, and we would be concerned that they will escalate” following the decision, she added.

Mara Clarke, founder of the Abortion Support Network, recommends that “the most important thing people in the UK can do to support abortion rights within the UK is to be loudly, unashamedly, pro-choice.”

5. Take To The Streets

Following the announcement that the Supreme Court had overturned Roe v. Wade, people headed to the U.S. Embassy in London and the U.S. Consulate in Edinburgh to protest a woman’s right to choose.

You can follow Abortion Rights UK on social media for more information regarding future demonstrations.