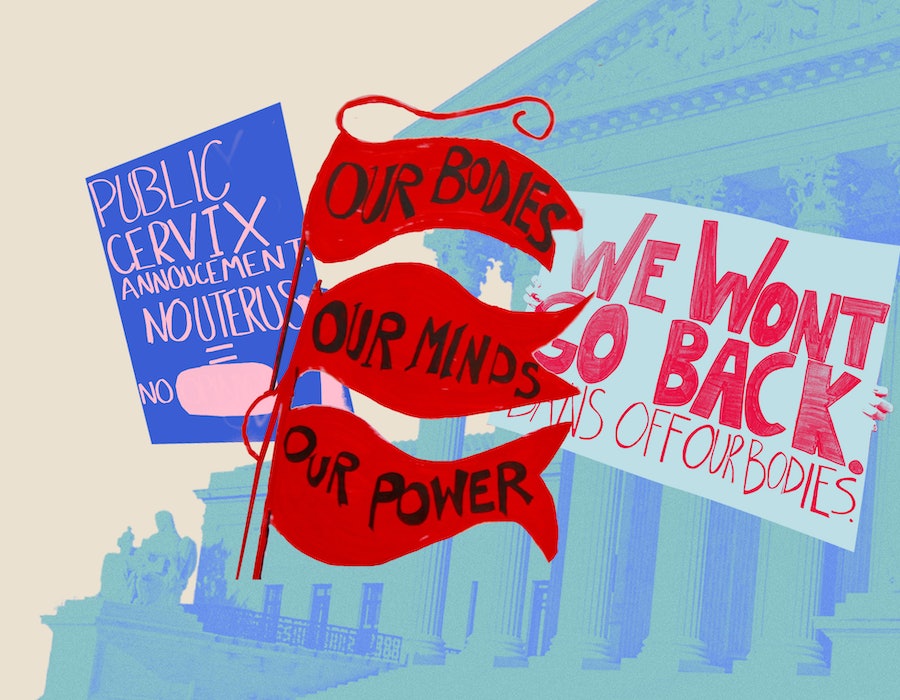 On June 24, the Supreme Court made the decision that people across the country have feared for decades: The court overturned two landmark abortion access decisions — Roe v. Wade and Planned Parenthood v. Casey. Without Roe, about half the country will immediately enact outright bans or severe restrictions on abortion, thanks to trigger laws and old laws already on the books. Access to the procedure will be called into question elsewhere, as states must now decide how to individually legislate abortion protocol.

But, overturning Roe is just one of many recent blows to abortion access in the United States. Abortion access is already withered away in so many states — just this year, 31 states have introduced abortion bans — that it’s effectively impossible to access for many. One bit of silver lining: There’s a battalion of folks fighting to help preserve the right to abortion in the United States — and some even upended their lives to do so. Below, read five people’s stories.

Interviews have been lightly edited for length and clarity.

I started working at an advertising agency in Houston after graduating from college in 2015. Then when Trump got elected in 2016, I was like, “What can I do?” I started working with an abortion fund in Houston. I drove patients to and from appointments, started escorting at a local clinic, and moved toward spending a lot of time volunteering.

Eventually, in 2018, I left my advertising job entirely and took on this other part-time job so that I could spend most of my time volunteering.

I’d paid off all my student loans, and without any major bills to pay, I could dedicate more of my time to abortion care. Then, later that same year, I saw an opening for a clinic position, and I really wanted to work with patients. I got trained as an abortion doula and applied for an abortion doula opening at the clinic in Texas. [Editor’s note: Because of the scarcity of abortion clinics in Texas, Miller asked that the location of her current clinic remain private.]

I’ve been here since, working as both an abortion doula and patient counselor. I’m in the procedure room with patients, and I talk with patients on their first day in our clinic. I just remember before I left my job, increasingly feeling like I was putting a mask on to go work for the man. And even though I might not be making as much money now, I can volunteer for eight hours on a Saturday and offer something so much more valuable.

In 2020, when Governor Abbott did some bullsh*t with an executive order that shut down abortion services for 30 days, I went out to our sister clinic in New Mexico for a while. Then when SB 8 started in 2021, I did another three-week stint in New Mexico. That’s when I basically confirmed I’d be moving out there this month.

The reality is that turning abortion care on and off, as Texas often does, doesn’t work. Clinics are mostly small businesses. Some people, like the doctors, can travel. But the support staff, like me, live in the community. When clinics close, support staff lose their jobs and can’t necessarily go to another state to keep working where abortion is still legal.

I’m the operations manager for a mobile abortion clinic in the Midwest — we treat patients who are fleeing states with repressive reproductive laws. I can’t say too much about what my job entails, but we set up mobile clinics and have a telemedicine operation. I write code, work on grants, make phone calls to doulas, meet with lawyers, etc. It’s general operations work. I left my previous job seven months ago so I can do this full-time.

I spent the past six years as a health equity advocate. I traveled around the U.S. talking to folks about health care needs, wrote a book about it, and gained a better understanding of the way health care intersects with the rest of our daily lives. Amid this work, in 2016, I did a fundraiser for an abortion fund in Texas and ended up raising about $70,000. That clued me in a lot about abortion funds and abortion in Texas, and I’ve thought a lot about it ever since.

Ultimately, I’m just some guy who can use a computer pretty well. So I wanted to be with the people who are doing work that I think is important, because their fight is my fight, too. A lot of things changed for me over the course of the pandemic, and when I saw this opportunity to get involved in a new model of abortion care, I thought, “Well, obviously I want to do this.”

The world I want — the world I need — cannot exist while people are made to suffer for the need of basic health care; of simple autonomy; of the dignity and respect I believe we all must be afforded. I have no desire to lead anyone anywhere in this space. I came to show up and back the people who have been fighting for decades. If I can do that by using the computer, then I’m going to use the computer as hard as I can. I am going to write the cleanest code and design the best godd*mn spreadsheets anyone has ever seen if it is useful to the people around me. — Tim Faust

I spent most of my adult life working as a pleasure-based sex educator, meaning I taught sex ed to adults. I ran sex toy shops, did sex toy blogging, and ran a sex blog through the mid-2010s.

I didn’t really care too much about abortion until I had one about 20 years ago when I was living in Texas. During the counseling appointment, I had to listen to a recording about the possible negative outcomes of abortion and how it could possibly affect my mental health. And I just remember being so appalled that I was being forced to listen to this inaccurate bullsh*t. But I felt fine going into my actual appointment, until I arrived at the clinic to a mob of protesters, screaming and hitting the cars that were driving through. I was just so positive that they were going to blow the clinic up and that’s how I was going to die. I ended up fainting and throwing up all over myself. The doctor and staff were absolutely amazing. I wasn’t worried about the procedure. But the sheer, visceral terror of the protesters is what made the experience really terrifying.

Right around the time that Supreme Court Justice Brett Kavanaugh was confirmed, my sort of side care about abortion became front and center and just filled me. I had started going to school but had no real direction and thought, “What can I do? What are my skills?” So I switched to study communications and am currently working toward a master’s degree in strategic communications with the goal of working in abortion communications.

My dream job is to get in with any of the Southern abortion funds. I work now with the Woodhall Freedom Alliance, which is a nonprofit that fights for sexual freedoms throughout the country and world. But I really want to get into funds because in a post-Roe future, funding abortion is going to be everything. — Crista Anne

When the Wendy Davis filibuster happened, I basically called off all my shifts so I could be there. It was one of the moments that, when I think about it, the hairs stand up on my neck because it was so powerful. Watching the Capitol dome literally shake at the sound of our voices is the kind of sh*t you remember forever.

I was working in music promotion, screen printing, and events at the time. And during the filibuster, as I was giving up all this income to participate in something I really cared about, I wondered what I was doing in my actual job. Why was I so dedicated to the arts when the thing that motivates me is this fight for abortion access in Texas? As a person who’s had an abortion myself, the filibuster basically made me say, “This is my calling, I should say f*ck it, quit my job, and go back to school.”

So that’s exactly what I did. I went back to bartending at night and working multiple jobs in order to pay for nursing school. All the while, I volunteered for the Lilith Fund — an abortion fund in Texas — and did a lot of fundraising there. I trained to be an abortion doula, and started weaseling my way into abortion care.

In 2016, I decided I had to get out of Texas and moved up to New York. My ultimate goal is to be a nurse practitioner who can provide abortions, which is legal in New York but not in Texas. I started working at Planned Parenthood in Brooklyn as a medical assistant, but left a few years later to work in HIV care and LGBTQ+ health for New Yorkers experiencing homelessness in the shelter system. I plan to finish school to become a nurse practitioner — a clinician who can directly provide abortion services in New York state. — Jean Lewis*

I grew up super evangelical in Colorado Springs. My dad worked at Focus on the Family, which is an evangelical ministry here that promotes fundamentalist Christian ideals via TV, radio, and print media. So I grew up at the height of purity culture, and anti-abortion messaging was huge. I was pretty indoctrinated into the pro-life world. I never had any sex education, and neither did any of my peers who believed the same way I did.

By the time I went to college, my views started to change, I realized I was queer, and I cut off communication with my dad, who was still really enmeshed in evangelical media. Then, in 2019, I was working at a tech startup when I connected with one of the professors from my college who’s a certified sex therapist and has an institute in Seattle called the Northwest Institute on Intimacy. They had a program that trained postgrads to be clinical sexologists and have sexual bias training. The professor needed someone to help with social media and marketing, but also help out with in-person trainings. I jumped on it, and left the startup.

From 2019 to 2021, I sat through hundreds of trainings, many of which were about reproductive rights. I helped design curriculum around normative sexual development for kids ages 0 to 18, and helped write, edit, and publish online courses and trainings around embodiment. Some of those trainings include information on abortion and specifically on how to manage at-home abortion with medication. I also work with clients who speak publicly about their abortion experiences in conservative states. Now I’m back home in Colorado Springs, looking to get sex-ed certified myself, which feels incredibly important now that I know how vital the state of sexual literacy in this country is to our overall well-being.

The stigma that has pushed a lot of people into being anti-abortion has a lot to do with misinformation. To me, so much of the abortion debate is about what we believe people are allowed to do with their bodies. And if kids grow up with good sex education, I think that helps so much with developing a better worldview and understanding. — Erin Beattie

More like this
Scotland's First Period Dignity Officer Is... A Man?
By Darshita Goyal
How this Founder Inspired a New Wave of Drinking
By Jordan Murray
I Tried TikTok’s Favorite Menstrual Cup & Here Are My Honest Thoughts
By Meguire Hennes
Here's Why Your Nose Runs When You Eat
By Carolyn Steber
Get Even More From Bustle — Sign Up For The Newsletter