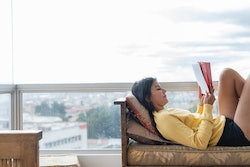 The first new moon of the year is rising on Jan. 2, and it’s set to serve some serious motivational boosts as we launch our goals into 2022. The January 2022 new moon is all about making tangible plans that we can actually stick to, and it’ll supercharge our new year’s intentions with added discipline, focus, and determination. By aligning with the spiritual meaning of January’s new moon, we can make the most of its manifesting power.

New moons are associated with new beginnings in astrology, as they denote the reset point of a new lunar cycle. It’s considered the most supportive moon phase for starting new projects, setting intentions, or otherwise bringing fresh energies into your life — which is why many people plan manifestation rituals under the new moon. The January 2022 new moon takes place in the pragmatic sign of Capricorn, so its unique spiritual meaning is about building a solid and soul-nourishing foundation for our goals — one that can support us even as we reach for our highest aspirations.

January’s new moon can bring us the motivation we need to slay our New Years’ to-do list and bring some excitement to our 2022 intentions, so read on for the scoop on its spiritual power.

This new moon peaks less than 48 hours after 2022 begins, so its astrological energy aligns perfectly with the New-Years-y focus on embracing a fresh start. New Year’s Day always falls during Capricorn season — which is a fitting vibe, as Capricorn zodiac energy can make us feel more efficient and goal-oriented. But having both the sun and moon joined together in this cardinal earth sign’s realm at the start of the year feels especially fortuitous. This lunation inspires us to set realistic intentions for ourselves while also granting us the discipline we need to follow through on them.

When connecting with the spiritual meaning of January’s new moon, it’s important to consider the spiritual essence of Capricorn as a zodiac sign, since that’s where this lunation takes place. Capricorn often gets pegged as being all about work and money, but these earth signs are quite mystical, too. They’re represented by the ethereal symbol of the sea-goat — a mythical being who’s half goat, half fish. Unlike its fellow landlocked earth signs, like the Taurean bull and the Virgoan maiden, Capricorn’s sea-goat can easily slide off the earthly shores and dip into the watery realm of spirituality and emotion — meaning it knows how to balance its worldly pursuits with some existential exploration, too.

With that in mind, allow yourself to dig deep into your soul to identify exactly why you want what you want under this new moon. Focusing on tangible goals right now is good, but if there’s no meaningful depth to your aspirations, it’ll be hard to summon up the longterm stamina necessary to make them real.

How To Work With The January New Moon Energy

December’s new moon was a solar eclipse, and because the chaotic nature of eclipses make them inauspicious times for manifestation, January’s new moon is the first in nearly two months that’s astrologically supportive of intention-setting and ritual work. And because many of us are already making plans for the new year ahead, it couldn’t have arrived at a better time. Under this new moon, spend some time focusing on what you want to accomplish during the year ahead and start laying out the framework for your goals. Try to break your big dreams into smaller and more realistic steps. This Capricorn moon is all about being efficient and practical, so don’t make your road to success feel insurmountable.

Whether or not New Year’s resolutions are your thing, the spiritual meaning of this lunation makes it a gorgeous time to clarify your personal intentions and make sure they align on a soul level. While Jan. 1 may mark the start of a new year, it’s truly just another day — but the new moon on Jan. 2 will really charge this holiday weekend with the cosmic energy of a fresh start.

More like this
The Spiritual Meaning Of The January 2023 New Moon
By Nina Kahn
The 3 Most Organized Zodiac Signs, According To An Astrologer
By Kristine Fellizar
Your Ultimate Guide To Aquarius Season
By Brittany Beringer
Here’s Your Daily Horoscope For January 30, 2023
By Mecca Woods
Get Even More From Bustle — Sign Up For The Newsletter
From hair trends to relationship advice, our daily newsletter has everything you need to sound like a person who’s on TikTok, even if you aren’t.