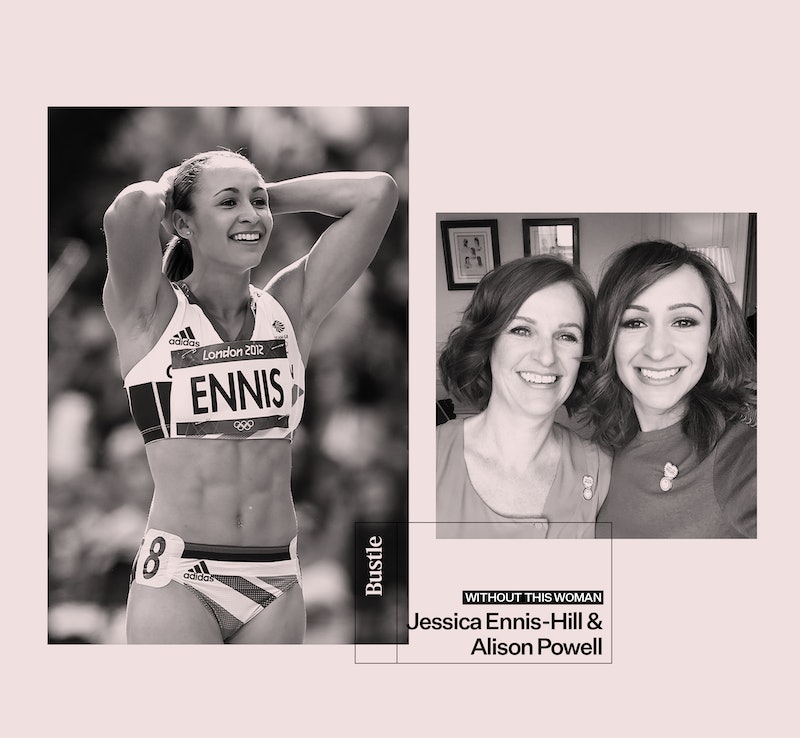 Bustle's "Without This Woman" is a series of essays honouring the women who change — and challenge — us every day. Below, Jessica Ennis-Hill opens up about the woman who kickstarted her career as an athlete — her mum. As a Vitality ambassador, Ennis-Hill is working with the health and life insurance and investment company to call on the public to turn their intentions into action and asking them to a pledge to change one thing to take them closer to the life they want. Here she details how her relationship with her mum supported her through training, competing, and parenting, to become the person she is today.

My mum has been a fantastic mother. She had such an impact on the direction that I went on in life — going down the route of sports and athletics. There was always an understanding of the talent that I had, but there was never a pushy side to it. There was never the feeling that I had to do it, or that I couldn't let my mum or my parents down. It was always a very gentle way of encouraging me to be the best I could be. Without my mum introducing me to athletics at that age, and supporting me the way she did, I would never have continued with it. Without her, I would never have carved out the life that I have for myself now.

We laugh about how I got into athletics. My mum says it was basically cheap childcare. She worked in hospitals as a nurse for a bit and then with people with substance abuse problems. So she was quite busy. During the summer holidays they had a camp on at our local track in Sheffield at Don Valley Stadium. It was two weeks of athletics and a way to keep me and my sister entertained. I had no idea that I would love it as much as I did.

Competing as an athlete is a very different time to any other in your life — you're training all the time. My mum always wanted to make sure that I was still studying, doing well at school, and not putting all my hopes into being a superstar athlete. It kept me really grounded. She always said "keep doing what you're doing if you enjoy it, but don't neglect all the other things in life." She always reassured me about things. I knew I could talk to her about anything — I don't think I ever kept any secrets from her.

When you're a teenage girl, you want to follow what everyone else is doing. I always remember my mum saying to me, "don't be a sheep. Don't follow the crowd, just be your own person and do what makes you happy." That always stuck with me and has been a real positive influence over how I've gone on to live my life, particularly with sport and athletics.

Another thing she always used to say to me when I was competing was "don't let the big girls push you around." I was a very small, scrawny child and, particularly in the heptathlon, the heptathletes are notoriously tall, strong, Amazonian women. She didn't want that to be something that had held me back. Her saying that really propelled me forwards and gave me so much confidence.

Before you become a mum, you're blissfully unaware. When you actually experience being a parent, you just have a massive respect for what they've done.

My mum is a really determined, strong woman. She was pregnant with me when she was 19 and had me when she was 20. And then my sister three years later. Now being a mum myself, I understand it must have been hard during that time. I have so much respect for her and for the way she raised me and my sister.

Before you become a mum, you're blissfully unaware. When you actually experience being a parent, you just have a massive respect for what they've done. My relationship changed with my mum, as I had my first child, and then my second. It definitely gave us another connection on a completely different level.

Having my mum's support, our family's support, after I had my son Reggie, was key. It was a massive joint effort to help me continue competing. Before I had Reggie, I was like "I'm gonna bring him to the track and carry on. I'm in control of everything, it'll be fine." The reality is that you're not really in control — they're babies and they're unpredictable.

You really value having your family around — they'd help out for an hour or two or bring Reggie down to the track, so I didn't have to feel that worry of being away from him. Without my mum and without our extended family it would have been such a challenge to come back and win the World Championship the following year and win another silver at the Olympics.

As told to Aimée Grant Cumberbatch. This interview has been condensed and edited for clarity.

More like this
Jack Grealish’s Reaction To England’s New Kit Is The Most British Thing You’ll See Today
By Darshita Goyal
Princess Charlotte Proved She's Wise Beyond Her Years At The Queen's Funeral
By El Hunt
Will Archie & Lilibet Attend The Queen's Funeral?
By Sam Ramsden
Hailey Bieber Is Making Cargo Trousers Work — Here’s How You Can Too
By Catharina Cheung
Get The Very Best Of Bustle/UK