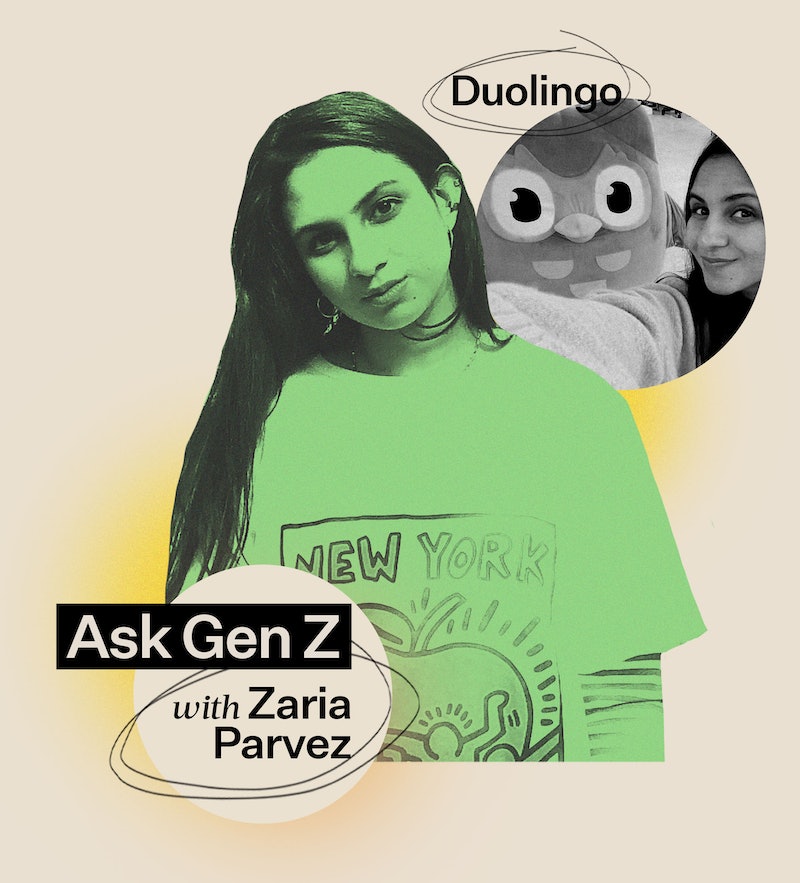 In Ask Gen Z, youngs answer our burning millennial questions about Internet culture, dating, and what's actually cool right now. Here, Zaria Parvez of Duolingo’s super viral TikTok account talks about how she landed a job that allowed her to use memes at work while maintaining professionalism.

Maybe you’re deep in the trenches of FoodTok’s chopped salads, or perhaps you’re emotionally invested in Sylvanian Drama. No matter your online niche, at some point you’ve likely come across a TikTok video starring a bright green bird costume participating in high jinks around an office setting. That would be the @Duolingo account, the language learning app’s platform run by Zaria Parvez, a Gen Z powerhouse and a self-identifying “pandemic graduate.”

Duolingo’s account is a special genre of chaotic good, which is often challenging for brands to accomplish. It features marriage proposals to Dua Lipa and uses trending sounds as the background music to a 15-pound bird mascot costume dancing in the forefront. After more than a year and a half as the mastermind behind the Duolingo owl and its related memes, Parvez has helped to grow the account to 3.3 million followers and more than 63.3 million likes, not to mention all of the blue verified checks in the followers list, like influencer @Rod and other brands like @BurgerKing. “I think outside people are seeing a TikTok video; meanwhile, all of us are also laughing about what we're posting and just having fun with it,” the 24-year-old located in Pittsburgh says.

As a record number of Americans leave their jobs, finding a role that feels authentic to your personal values feels more important than ever. According to Parvez, who’s the youngest person on Duolingo’s marketing team, professionalism doesn’t have to get in the way of your personal brand; in fact, your true self is your greatest asset.

Below, we talk to Parvez about finding a position that works for you.

The job application process can be so routine when you’re doing the same thing over and over again. How did you go about finding a job where you can really be yourself?

One of the best pieces of advice I got was “Find your North Star” because knowing what that is will help you figure out what jobs are meant for you and which aren't. Mine [North Star] is wherever I work and whatever I do, I want to be at a place where I'm in a position to be compassionate and passionate. Part of our mission [at Duolingo] is to make education accessible — that’s understanding where people are coming from in their lives and what this app can do for them. For the passionate part, I love social media, and I wanted to be in a place where I was given freedom and told “Here are your accounts; let's see what you can do with it.”

My resume had a lot of jokes in it, things that you would not really expect. For example, my accomplishments section was called “Makin’ Mama Proud.” I think that's part of the reason why I stood out.

I got rejected from a lot of jobs with that resume because it was maybe too creative or too personal. It wasn't “professional” enough, and as a woman of color, I was sick of being told what makes me professional and what doesn't. When I eventually came to interview for this role [at Duolingo], I was in a bright yellow outfit. I had my polka dot pants on, and I was like, “I want to be at a job that allows me to be my full self. I'm giving it to you, take it or leave it.”

How did you go about feeling comfortable in this new role?

This was my first job after graduation, and TikTok success didn't come until a year into it. When I first started, I made myself think that maybe my opinions didn’t matter — it was imposter syndrome. What helped was that I was told the first six months were meant to just absorb everything about our brand.

After that, I was able to really understand the brand tone and voice, which gave me the confidence to actually speak on ideas. I'll never forget that my first day on the job was when we all worked together to publish our statement on Black Lives Matter, which was a really intense first day for someone who's just out of college. I was asked for my opinion, and for me, that was huge because I didn't think I would be included in those conversations. I was put in a direct message with the CEO that first day. People showing confidence in me helped me build my own confidence to the point where I was able to articulate my thoughts and ideas and run with this account to where we are now with our TikTok presence.

How do you deal with that imposter syndrome?

I was one of the first new graduate hires, so I felt intrinsic pressure. The moment I walked into the office, though, people saw me and respected me as an authoritative source on social media and asked for my opinions. My boss even said, "We hired you because we want your opinion. We value what you bring to the table." That really helped make me feel wanted and valued. When it came to our TikTok, it was always an experimental thing. I was told from the beginning that I was trusted.

Ultimately, it did work. We ended up going viral [in September 2021], and I think it’s because I was given that freedom to test and learn. That’s exactly how I feel employers should be raising talent to help them reach their best potential. It’s why I was able to feel less and less like an imposter.

How are you pitching these very Gen Z, Internet-inspired meme ideas to your colleagues in a way that makes sense to them?

When I'm pitching to higher-ups, I explain the memes because I feel like the more context people have, the better. Sometimes it’s understanding that some people in the office won’t get it too. However, they trust me and hired me for this job, and I'm part of this generation that we're trying to talk to, so it's going to work. These ideas start with trends, but they really form into greater strategies of how to keep staying relevant and on top of the trends while also being trendsetters. And I think having that empowerment as young talent has really created space for our account to flourish because they're giving something to Gen Z from the hands of a Gen Z.

Avenues for communication at work like email are often spaces where we see generational divides. What does your Slack etiquette look like?

My personality has always been a bit outspoken. I've always been very direct and a little sassy, a jokester, someone who never takes herself too seriously. With Slack messages, I'm constantly shooting sh*t with people, sending memes, and sending jokes. People are used to it.

Something really funny is that T-Pain became a mutual follower on our TikTok, and I was like, “Oh, do we message him?” to my co-workers. Then he messaged us first, saying, “Hell yeah.” So in our Slack, I just screenshotted that message and told our staff, “These are the most career-altering words that have ever been said to me. How do you respond to T-Pain? Wrong answers only.” Everyone started chiming in with their fun answers. Being professional doesn't mean you can't have a personality.

I'm a huge believer in being professional with an edge when it comes to any type of communication, including email. Being able to show your personality on everything you send out tells the larger story of who you are as an individual and allows for authenticity. My out-of-office emails encapsulate exactly what I'm talking about. For example, I’ve written auto-response emails [to say things] like “Knock, knock. Who's there? No one because I'm out of the office. But it looks like you're not. Because you're emailing me. Bummer. Back to me: I'm out until Feb. 14 living my Lizzie McGuire dreams in Italy! Ciao!”

More like this
How To Come Out Online, According To Trevi Moran
By Melanie Mignucci
Coastal Granddaughter Is The Latest Summer Aesthetic Going Viral
By Emma Garza
Side Character Energy Has Arrived — Here’s What That Means
By Sophie McEvoy
American Girl Doll Memes Are Going Viral On Instagram & Tiktok
By Emma Carey
Get Even More From Bustle — Sign Up For The Newsletter