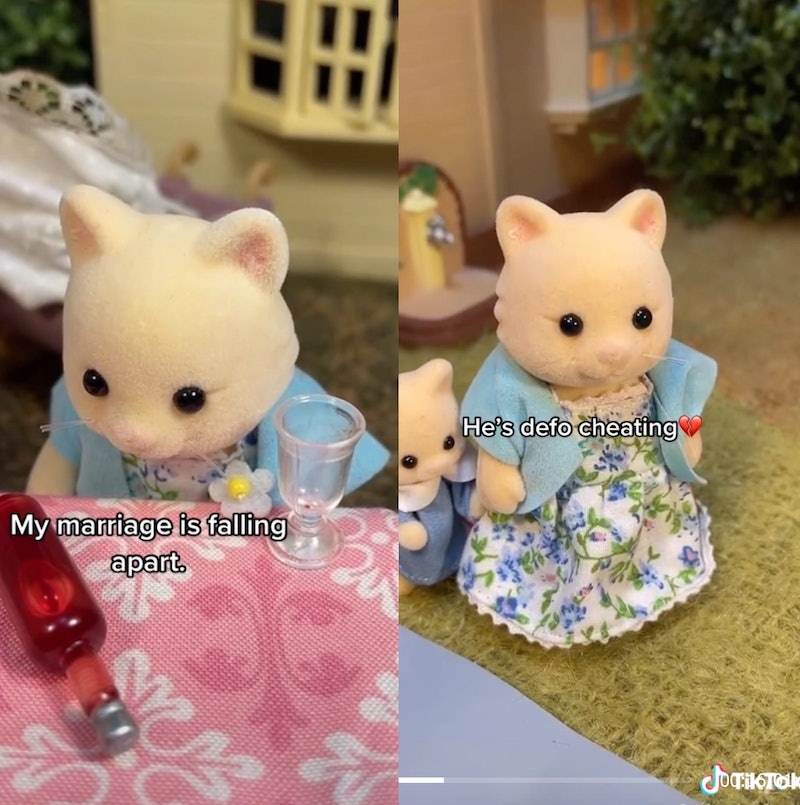 In the latest TikTok from @Sylvaniandrama, posted on Feb. 1, a flocked plastic cat figurine, dressed in a pink crop top and denim miniskirt, is told that she’s going to be a teen mom of twins. The video chronicles the character’s fall from grace, from being kicked out of book club with the girlies — who, spoiler alert, turn out be dealing drugs disguised as infant formula — to being rescued from a red flag-filled relationship with her children’s father by her doctor. One comment succinctly sums up the appeal of the high-stakes drama with an arch comparison: “I love this episode of Euphoria.”

While your Sylvanian Families dolls are suffocating in a box somewhere at your parents’ house, creator Thea von Engelbrechten, 21, is using hers in a saucy, plot-heavy TikTok series called Sylvanian Drama. The episodes, which come out about once a week, regularly get over a million likes apiece, and the account counts Joe Jonas among its recent followers. Each TikTok follows emotionally static animal figurines caught in sensational situations, juxtaposed against throwback pop songs, slang-heavy misspelled captions, and on-the-nose emoji usage. (Think: a broken heart emoji, the caption “my marriage is falling apart,” and The Killers’ “Mr. Brightside” playing in the background.) Videos with the hashtag #sylvaniandrama, where people post their own Sylvanian scenes, have more than 10 million views.

“The captions are so absurd and matter-of-fact, you watch these videos with your jaw open — like, did that panda really just say that?!” Justin, 32, a law student in California, tells Bustle, referencing an episode where a faded panda bear admits to holding 13 people hostage in the basement. “The humor is so dry and punchy, I wish I found the account sooner.”

Mack, 24, an accessories designer in New York City, says she had never heard of the series before she saw it on her For You page early this year. “The contrast between cutesy animals and realistic yet inappropriate dialog is hilarious,” Mack tells Bustle, adding that she shares her favorites to her Instagram stories.

The first episode of Sylvanian Drama debuted back in Jan. 2021, and within a week, Engelbrechten tells Bustle, she had over 20,000 followers on TikTok. As the account nears 2 million followers, she says that her friends and family aren’t surprised by the positive reception. “I always wrote plays as a kid and forced my family and friends to perform them and they were always very Sylvanian Drama-esque,” Engelbrechten says.

Today, “cringey” teen dramas like Euphoria and Gossip Girl, plus Tarantino films, inspire Sylvanian Drama TikToks, though most of the outlandish dialog and plot twists come from the heart. “I make the videos up as I go along,” Engelbrechten tells Bustle, adding that the “brutally honest” ideas often come from real life. “Many of the issues that the Sylvanians have are common amongst young people, like binge eating or addiction. It’s just my way of coping to joke about it.” She believes that people have latched onto the series because of the ironically innocuous nature of the Sylvanian Family dolls. “They are a great quality toy and the expressions on their faces are particularly funny when paired with certain quotes.”

Not convinced? In the time it would take you to decide on a TV show to stream, you can (and will) cruise through every episode of Sylvanian Drama. Warning: you’ll never look at your dolls the same way again.