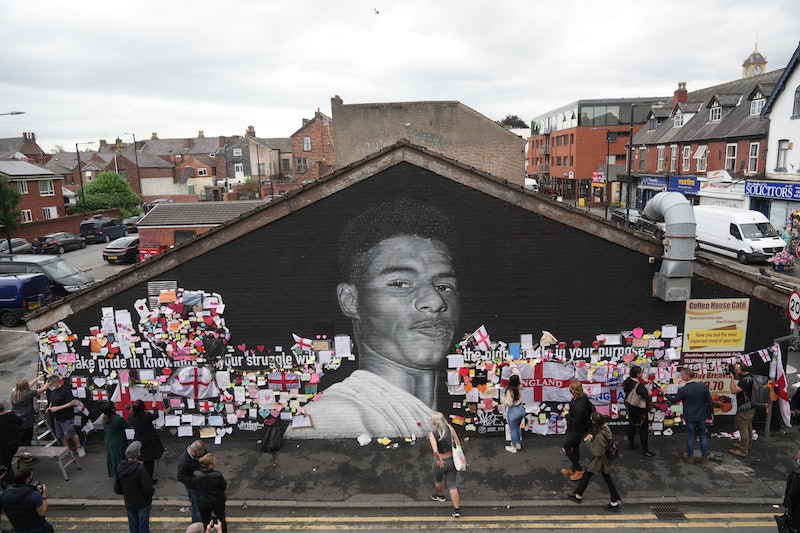 Fans, politicians and celebrities have rallied behind footballers Bukayo Saka, Marcus Rashford, and Jadon Sancho, after they were targeted with hundreds of racially abusive messages online due to missing penalties during the Euros 2020 final. It's not the first time that Black footballers have been subject to racism from anonymous accounts online and in response, an existing petition calling for verified ID on social media has gained attention, reaching more than 600K signatures.

The petition, dubbed #Trackatroll, was created by Katie Price after her son Harvey was subject to online bullying. It asks for the “removal of anonymity to ensure that users cannot cause harm by using online platforms to abuse others.”

It’s estimated that in the UK alone there are around 16 million Twitter users and 28 million Instagram users and currently, anyone can create an account without a valid ID such as a passport or driving license.

Why Is The Petition Calling For Verified IDs On Social Media?

The petition states that the government’s current ‘Online Harms Bill’ — which sets out ‘the UK’s ambitious vision for online safety’ — doesn’t go “far enough” in making online abuse a “specific criminal offense.” Instead, the petition wants it made a legal requirement to provide a verified form of ID when opening a new social media account, with the aim of making it easier to trace online abuse.

“Where an offense has taken place,” the petition reads, “they [the user] ought to be easily identified and reported to the police and punished.”

Price adds: “We have experienced the worst kind of abuse towards my disabled son and want to make sure that no one can hide behind their crime.”

How Have IT Bosses Responded To The Petition?

In light of the racism faced by England footballers, Twitter stated that “through a combination of machine learning-based automation and human review” it had “swiftly removed over 1,000 Tweets” and permanently suspended a number of accounts for violating our rules.” Similarly, Facebook — which owns Instagram — also stated it had “quickly removed comments and accounts directing abuse at England’s footballers” adding that it would “continue to take action against those that break our rules.”

What’s The Government’s Reaction To The Petition?

Back in May 2021, the government had initially responded to the petition to state that while it acknowledges “concerns linked to anonymity online” they believe that “restricting all users’ right to anonymity... could disproportionately impact users who rely on anonymity to protect their identity.”

The response went on to say, “These users include young people exploring their gender or sexual identity, whistleblowers, journalists’ sources, and victims of abuse.”

However, in light of recent events, Boris Johnson has stated that “we expect social media companies to do everything they can to identify these people.”

Per The Guardian, Boris Johnson has also summoned tech companies to Downing Street to order them to do more to tackle online abuse. As the news source reports, No. 10 stated: “The police already have a range of powers to identify and pursue those who use anonymity to spread hatred, but we have committed to strengthening the criminal law in this area.”

The Prime Minister will ask tech companies to “hand over the details of those who posted racist content online to the police.”

Have Any Public Figures Endorsed The Petition?

Meanwhile, user privacy on these platforms is an ongoing global debate. As the petition has gained support, many are concerned that the move to verified ID could silence marginalised and oppressed individuals and communities.

In an Instagram post, activist Gina Martin said the petition is a “knee-jerk” reaction to a complex topic, stressing that “most marginalised people we’d be aiming to protect would be locked out of having a social account...”

During a parliamentary debate in December 2020, Olivia Dowden said: “...we have not taken powers to remove anonymity because it is very important for some people” and cited those who are victims of abuse.

Meanwhile, Katie Price is continuing to fight for “Harvey’s Law” to pass. In February 2021, Price said to This Morning, “I’d love to go and meet some of these trolls and ask what goes through their heads.”

More like this
Iran Has Issued A Death Sentence Over Mahsa Amini Protests
By Catharina Cheung, Darshita Goyal and Maxine Harrison
Joe Lycett Just Took HIs David Beckham Qatar Protest To A Whole New Level
By Sophie McEvoy
Footballer Jake Daniels Shared His Thoughts On A World Cup Boycott
By Sam Ramsden
What To Know About Martin Bashir After Watching 'The Crown'
By Bustle UK
Get The Very Best Of Bustle/UK