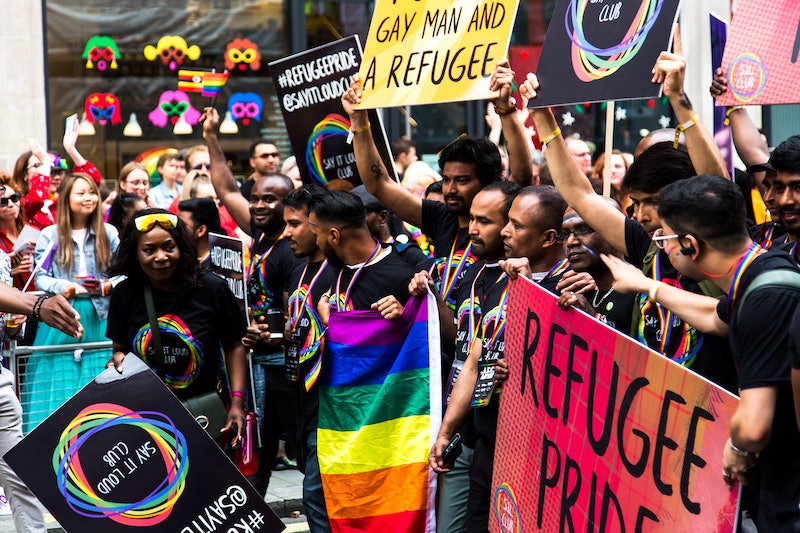 Following a research study conducted by the University of Sussex, it has been revealed that LGBTQIA+ asylum seekers are struggling to find refuge in the UK. The study, part of the University’s SOGICA (Sexual Orientation and Gender Identity Claims of Asylum) project, found that across the European countries they looked at, one in three LGBTQIA+ claimants were had their applications refused because decision-makers "did not believe their sexual orientation or gender identity was as stated."

The research team compiled their data from surveys and interviews completed by 82 asylum claimants and 157 "of those supporting them" in the UK, Italy, and Germany. Their findings revealed that more than half of the claimants experienced “physical or mental health problems" as a result of "the persecution they experienced or the process of claiming asylum."

Among the claimants the researchers heard from, the most common reasons they found for refusal of asylum were:

“These findings, of course, sit within a broader picture of the ‘hostile environment’ to immigration,” Moria Dustin, lead researcher of the project, told the Guardian. "“But it’s even easier for officials to turn away people applying for asylum on SOGI grounds, because they are even less likely than other claimants to have evidence to support their claim: what can they produce, when they’re in danger and fleeing? How likely are they to have with them photos or letters proving past relationships?”

Dustin went on to state: "These are people who are fleeing their home country not out of choice, but out of necessity. If they could speak with one voice, I believe they would say ‘I am who I say I am.’ Not being believed is their top concern.”

Dustin explained to the Guardian how the burden of proof was unfairly placed on claimants, despite international refugee law stating that evidence-gathering should be an equal responsibility between the applicant and the decision-maker. Immigration officials “rarely started with an open mind," Dustin told the newspaper. "For many, it’s a question of 'you must convince me.'"

Elsewhere in Europe, Norway’s federal government recently announced that the country will “prioritise LGBT+ asylum seekers as part of a new post-coronavirus refugee scheme,” Pink News writes. This will give priority to both individuals and groups.

“In nearly 70 countries, homosexuality is a criminal offence and those who violate gender and sexuality norms may be subject to persecution and discrimination in their home country,” Grounds Keek Almeland, Norway's state secretary for integration affairs in the ministry of education, said in a press release. “We are now changing the guidelines for the work of transfer refugees so that persons who are queer should be given priority.”

But, as Pink News explains, this scheme only applies to “transfer refugees”, i.e. those “who have been registered by the UN High Commissioner for Refugees (UNHCR) and transferred from one asylum country to another for permanent resettlement."

More like this
Gen Z Are Twice As Likely To Identify As Queer, According To New Data
By Sam Ramsden
What The UK Blocking Scotland’s Gender Recognition Bill Means
By Sam Ramsden
This Is When Netflix Is Going To Start Charging You For Sharing Passwords
By Darshita Goyal
Watch Jacinda Arden’s Devastatingly Honest Resignation Speech
By Sam Ramsden
Get The Very Best Of Bustle/UK
Sign up for Bustle UK's twice-weekly newsletter, featuring the latest must-watch TV, moving personal stories, and expert advice on the hottest viral buys.