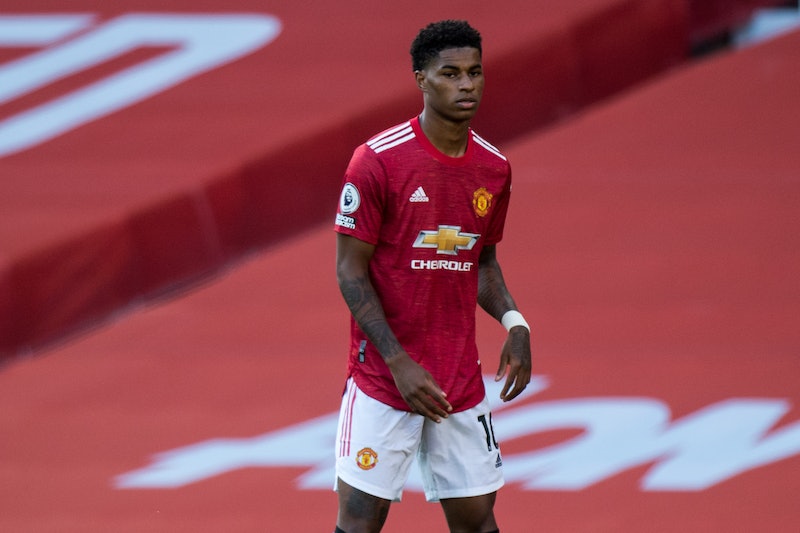 On October 15, Manchester United footballer Marcus Rashford launched an online petition calling for the government to provide more children with free school meals and he is appealing to the public to show their support.

Rashford's petition asks the government to extend the scheme so that free school means are provided "to all under-16s where a parent or guardian is in receipt of Universal Credit or equivalent benefit." The sportsman believes this will reach 1.5 million 7 to 16 year olds who are currently missing out, Sky News reports.

The petition also calls for the government to implement two other recommendations from the National Food Strategy: "provide meals and activities during all holidays" and "increase the value of Healthy Start vouchers to at least £4.25 per week, and expand the scheme." This will be implemented by the Child Poverty Taskforce, which was set up by Rashford in early September.

"Whatever your feeling, opinion or judgement, food poverty is never the child's fault," Rashford said (via the Guardian). "Let's protect our young. Let's wrap arms around each other and stand together to say that this is unacceptable, that we are united in protecting our children.

"Today, millions of children are finding themselves in the most vulnerable of environments and are beginning to question what it really means to be British," the footballer continued. "I'm calling on you all today to help me prove to them that being British is something to be proud of."

On October 10, Rashford became an MBE following his inclusion on the Queen's Birthday Honours list. Originally scheduled to be published in June, per BBC Sport, the list was "postponed by the Prime Minister to allow nominations of people who played crucial roles during the first months of the coronavirus pandemic." The footballer's nomination came after he wrote an open letter to MPs to rethink its decision on not continuing free school meals over the summer.

As a result of Rashford's letter and campaigning (under the hashtag ##maketheUturn), the government reversed their decision and announced a new £120m COVID summer food fund for 1.3 million pupils in England. "I don't even know what to say," the footballer tweeted in response. "Just look at what we can do when we come together, THIS is England in 2020."

Those looking to sign Rashford's new petition to expand the free school meal scheme can do so here.

More like this
Gen Z Are Twice As Likely To Identify As Queer, According To New Data
By Sam Ramsden
Rita Ora Finally Opened Up About Marrying Taika Waititi & Their "Perfect" Wedding
By Sophie McEvoy and Catharina Cheung
Pret & Costa’s Coffee Is The Strongest On The High Street, According To Which?
By Sam Ramsden
Twitter Has *A Lot* To Say About The "Single Penalty”
By Sam Ramsden
Get The Very Best Of Bustle/UK
Sign up for Bustle UK's twice-weekly newsletter, featuring the latest must-watch TV, moving personal stories, and expert advice on the hottest viral buys.