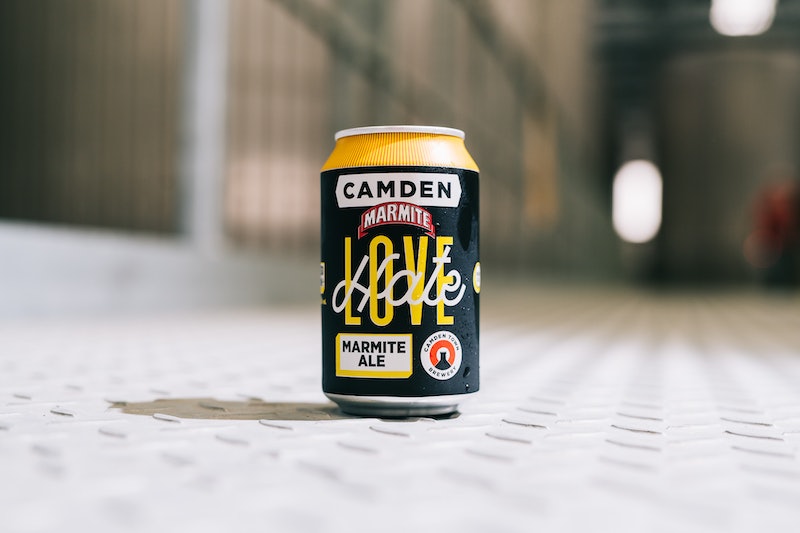 It’s difficult to keep up with all the various Marmite spin-off products that have been launched in recent years. We’ve had Marmite crumpets, Marmite houmous... even Marmite buttercream. And now we have another one to add to the list as famed London brewery Camden Town will soon be selling a Marmite-flavoured ale. Here’s everything we know so far about the divisive new drink.

Camden Town Brewery has teamed up with Marmite to produce their new Love Hate Ale. For this, the team started with a combination of pilsner, Munich, and smoked Rauch malt and added Perle hops from their classic Hells Lager. The finally step was to add the yeast spread, resulting in a smoky, Marmite-infused ale.

You’ll be able to pick up the beer for a limited time from September 13 at retailers including Tesco, Sainsbury’s, Co-op, Ocado, Waitrose, and Morrison’s. Consumers can also pick up a pack from Camden’s Beer Hall or from the Camden online shop for £8 for a four pack.

“Marmite is such an iconic brand that’s been dividing the nation for over 100 years, so we couldn’t think of anyone more iconic to launch a collaboration beer with,” said Ashleigh Amos, head of brand experience and partnerships at Camden Town Brewery, in a statement sent to Bustle UK. “Combining Marmite’s distinctive flavours with our never pasteurised beer might seem like an unlikely pairing at first – but trust us, you’re going to love it.”

As soon as Camden Town Brewery posted its new creation on Instagram, fans had a lot to say about it. “No no no,” one commenter wrote, while others were simply responding with puking emojis. However, one person wrote, “can’t wait!!” and others shared their enthusiasm, tagging their friends and saying “we need to try this.”

More like this
Deliveroo Is Selling Lotus Biscoff Cinnabons Now
By Darshita Goyal
Will Archie & Lilibet Attend The Queen's Funeral?
By Sam Ramsden
Women Around The World Are Cutting Their Hair In Solidarity With Mahsa Amini
By Darshita Goyal
The Queen’s Cause Of Death May Not Be Formally Announced
By Shahed Ezaydi and Catharina Cheung
Get The Very Best Of Bustle/UK