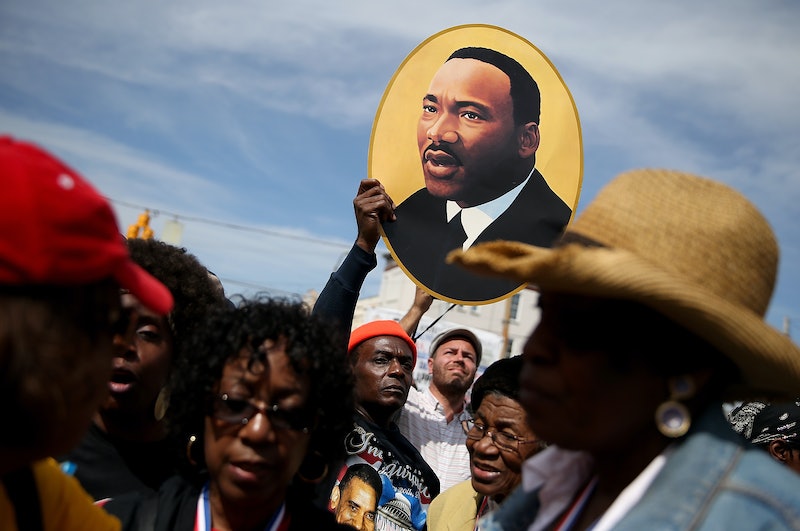 On Jan. 18, the world will observe Martin Luther King Jr. Day, and remember one of the most influential voices in the fight for equality during the Civil Rights Movement. Over 40 years after his death, Martin Luther King Jr.'s quotes and speeches are still just as relevant as they were in the '50s and '60s — and deeply important to share while commemorating the life of Dr. King.

King's life was cut short when he was assassinated in Memphis, Tennessee on April 4, 1968, but the impact he made during his time as an activist and Baptist minister during the '50s and '60s is unparalleled. The world is still plagued by inequality and racism nearly 40 years after his death, but Dr. King's influence and work during the Civil Rights Movement still paves the way for citizens to fight back against hate and bigotry.

There is no question that Dr. King was born a natural leader. He had the power to motivate and inspire, as well as bring people together. Long after he was murdered, Dr. King's words still resonate with people and encourage the next generation of leaders to stand up for equality and justice. Read on for Dr. King's most inspiring quotes about leadership that will inspire you to fight for a better world for all.

1. "Life's most persistent and urgent question is, 'What are you doing for others?'"

4. "We must rise above the narrow confines of our individualistic concerns, with a broader concern for all humanity. You see, this new world is a world of geographical togetherness. No individual can afford to live alone now."

5. "The time is always right to do the right thing."

6. "There comes a time when one must take a position that is neither safe, nor politic, nor popular, but he must take it because conscience tells him it is right."

7. "Whatever affects one directly, affects all indirectly."

8. "I believe that unarmed truth and unconditional love will have the final word in reality. This is why right, temporarily defeated, is stronger than evil triumphant."

10. "Lightning makes no sound until it strikes."

12. "Darkness cannot drive out darkness, only light can do that."

13. "No work is insignificant. All labor that uplifts humanity has dignity and importance and should be undertaken with painstaking excellence."

14. "We have flown the air like birds and swum the sea like fishes, but have yet to learn the simple act of walking the earth like brothers."

15. "Make a career of humanity. Commit yourself to the noble struggle for equal rights. You will make a better person of yourself, a greater nation of your country, and a finer world to live in."

16. "We are not makers of history. We are made by history. strength on love."

21. "“The toughminded person always examines the facts before he reaches conclusions; in short, he postjudges.”

More like this
Buckingham Palace Aide Resigns Over “Unacceptable” Comments To A Black Guest
By Shahed Ezaydi
10 Thanksgiving Alternatives You Can Celebrate This Month
By Katie Mitchell
Iran Has Issued A Death Sentence Over Mahsa Amini Protests
By Catharina Cheung, Darshita Goyal and Maxine Harrison
Here’s How To Turn On Instagram Post Notifications
By Megan Grant and Alexis Morillo
Get Even More From Bustle — Sign Up For The Newsletter

This article was originally published on Jan. 14, 2018