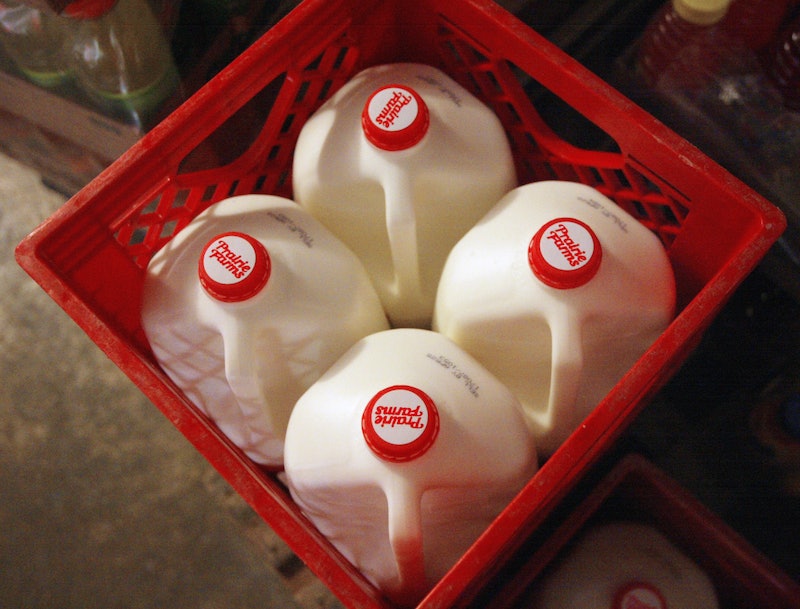 Despite reports that people are drinking regular milk again, it’s probably been a minute since you saw a milk crate used for its intended purpose. At your neighborhood farmer’s market, they’re stacked high with corn cobs or Swiss chard; on design-y Instagram pages, pastel versions corral candles or wine bottles.

TikTok’s latest viral challenge has found yet another, uh, creative use for those stackable plastic bins. The milk crate challenge involves stacking crates into a staircase-ish configuration, and then attempting to wobble to the top. Typically, the milk crate pyramid crashes about midway through, sending the intrepid climber flailing through the air (and landing on a bunch of upended milk crates, which I imagine is the full-body version of stepping on a Lego). The clips wouldn’t feel out of place on an early episode of Jackass.

As of Aug. 23, videos with the hashtag #MilkCrateChallenge had over 2 million views, with a sizable chunk of them showing people wondering where you get that many milk crates in the first place. (Behind a supermarket, I guess?) But by Aug. 24, TikTok had restricted search results for the hashtag and similar ones, with a TikTok spokesperson telling FastCompany, ​​“TikTok prohibits content that promotes or glorifies dangerous acts, and we remove videos and redirect searches to our Community Guidelines to discourage such content. We encourage everyone to exercise caution in their behavior whether online or off.” (TikTok has responded similarly to other dangerous viral trends, like 2020’s Benadryl challenge.)

It’s still pretty easy to find videos of the milk crate challenge across Twitter and other platforms, though. People who complete the challenge draw comparisons to Olympic athletes, and for good reason — it takes pretty much superhuman balance skills to successfully summit these DIY mountains. But much like Olympic-level gymnastics, the milk crate challenge is bonkers dangerous. Some of the stacks people build are five-plus crates high, which puts them at least five feet off the ground. Leaving aside the earlier full-body Lego analogy, a lot of these videos take place in parking lots, where would-be milk crate challengers tumble onto the hard asphalt.

Reactions to the milk crate challenge have migrated from TikTok to Twitter, where users are joking about what, exactly, people expected to happen after climbing up a milk crate tower. Even Dionne Warwick weighed in to suggest people avoid “prancing” on milk crates.

The verdict? This particular challenge has big “don’t try this at home” energy. If you need some way to use all those extra milk crates you have lying around, consider this extremely wholesome DIY instead.

More like this
On TikTok, Tinned Fish Date Night Is The Latest Viral Food Obsession
By Emma Carey
This TikTok Song About An Unrequited Romance Has FYPs In Shambles
By Emma Carey
Why Everyone Is "Soft Tagging" Friends On Instagram Right Now
By Alexis Morillo
Why TikTok Is Flooded With Controversial Videos About "Pick Me Girls"
By Courtney Young
Get Even More From Bustle — Sign Up For The Newsletter