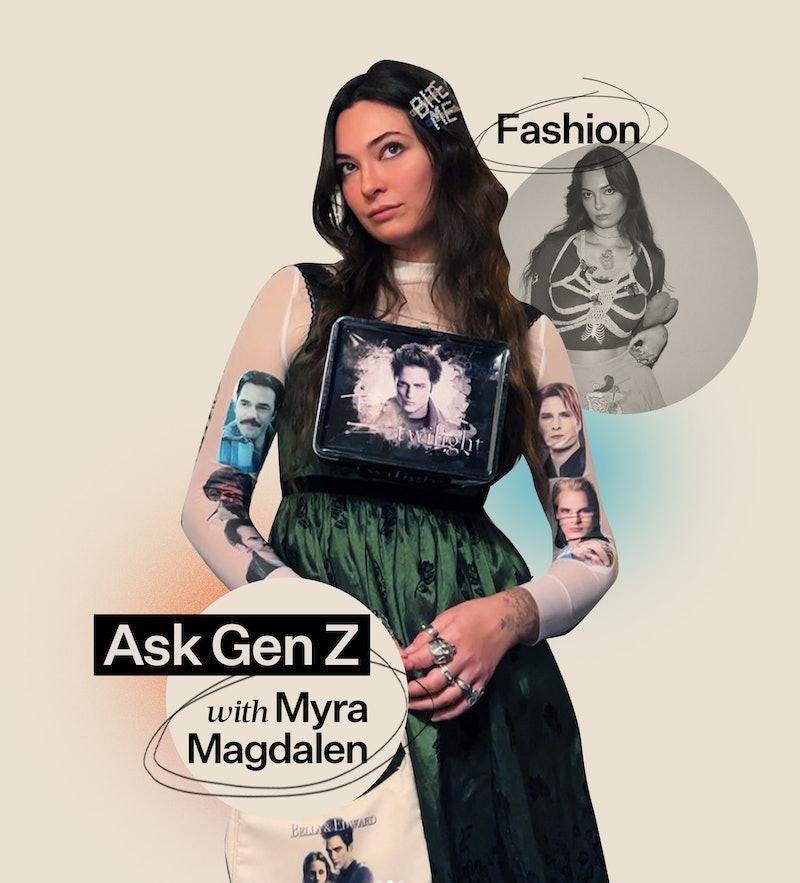 Myra Magdalen doesn’t have a specific name for her sense of style. The 25-year-old content creator and designer from Huntsville, Alabama, is known for her unconventional outfits on TikTok, styling household items and thrift finds — like lightbulbs and power strips — to create wholly original looks. Her followers have tried to categorize her work into movements like maximalism, camp, or sculpturalism, but for Magdalen, creating her looks is less about fitting into a movement and more about trusting her intuition. “How do I make this the most ‘me’ that it can be?” she tells Bustle of her thought process. “How do I deconstruct this, and then rebuild it in a way [that], at the end, I’m like, ‘That is so me’?”

Magdalen has built an audience of more than 400,800 followers through her weekly “Get Dressed With Me” videos. In them, she often picks one unconventional item she wants to style, like an artificial aquarium or Twilight souvenir lunchbox, and talks through how she builds an outfit from it. The comment sections of her videos are often flooded with messages, both confused and supportive, such as “i will never know your next move, and that’s okay” or “I love your mind.”

Being a content creator is foremost about expressing authenticity, according to Magdalen. When she started on the short-form video platform in March 2020, she made dress-up clips without voiceovers and didn’t style outfits aligned with her style. Instead, she made outfit-of-the-day videos using more mainstream clothing, with the occasional funky detail mixed in. But she didn’t find her crowd online until she started to create fashion content that she actually liked. “I started talking in videos,” she tells Bustle. “And thought, ‘I’m just going to do whatever,’ but that’s when I found an audience.”

Here, we talk to Magdalen about maximalist fashion and dressing for yourself.

You thrift a lot of your big items or find them secondhand. Where do you get the inspiration from to turn them into outfits?

It comes from a couple things. One, I was lucky to grow up in a household [in which] my mom was really eccentric, and we always had a bunch of weird stuff around. My mom has always had a funky style, so [my fashion sense] comes from that. The lines between stuff I like and stuff I wear are a little bit blurred.

When I see something at a thrift store and think, “Oh, that’s so me,” like when I saw the giant catfish stuffed animal, I want to bring it home with me. I’m going to wear it. It’s one thing to have something sit in your apartment, [but] sometimes that’s not enough.

Do you have any style icons you’re inspired by?

I take little bits and pieces from everyone that I see, online and in real life. Right now I’ve been revisiting the OG Lady Gaga and Nicki Minaj styles from when I was a teenager — that super pop art, camp stuff. Even people who don’t think they’re being style icons, like regular people walking down the street or in the grocery store, they’ll be dressed or layering something in a way [that makes me] think, “Wait a minute, I love that. I’m going to do something with that.”

What’s your creative process for building an outfit?

I see an object, general idea, or theme and think, “I vibe with that.” Then I try to allow myself to be influenced by what resonates with me. I shake [off] influences that make me feel like I don’t actually like [it], so that I can get it back to what’s the most “me” an outfit can be — just really, truly me and not anyone else.

You use some heavy items when styling, like a laptop or robotic creatures. How do you attach those to your clothing?

I do industrial Velcro. It’s called super strength Velcro, depending on where you get it. It comes in a big roll, so you can cut it into whatever shape you need. I learned the Velcro trick from my mom.

Do you wear your outfits out, and if so, what kind of reactions do you get?

Not all of them, but a good bit of them I’ve worn out. I’ve gotten compliments. I haven’t gotten too many rude comments. I’m 6-foot-3 flat-footed, and I do wear platforms a lot, so I get a lot of comments like “Why are you wearing those shoes when you’re already so tall?”

Has anyone ever offered to buy your clothing while you were wearing it?

Yes, especially when I was living in Los Angeles. I take it as a huge compliment. One time I was out with my friend and we were taking pictures downtown. I was wearing this denim jacket that I’d painted a snail on the back of, and I’d sewed a bunch of fake rainbow fur all over it. I had a woman offer to buy that off of me.

What advice do you have for someone interested in trying out maximalism?

Think of two things that you really like, which have nothing to do with each other, and try to find the middle ground. [For example,] I really like bugs and I really like technology. Or someone could say, “I really like naturalism, but I also really like Western, so I’m going to do an outfit that incorporates both of those.” Maximalism is great because you can’t mess up. You can’t do it wrong if nobody knows what you’re doing.

More like this
This TikTok Song About An Unrequited Romance Has FYPs In Shambles
By Emma Carey
Why Everyone Is "Soft Tagging" Friends On Instagram Right Now
By Alexis Morillo
On TikTok, Tinned Fish Date Night Is The Latest Viral Food Obsession
By Emma Carey
TikTok's Butter Board Might Be The New Cheese Plate
By Emma Carey
Get Even More From Bustle — Sign Up For The Newsletter