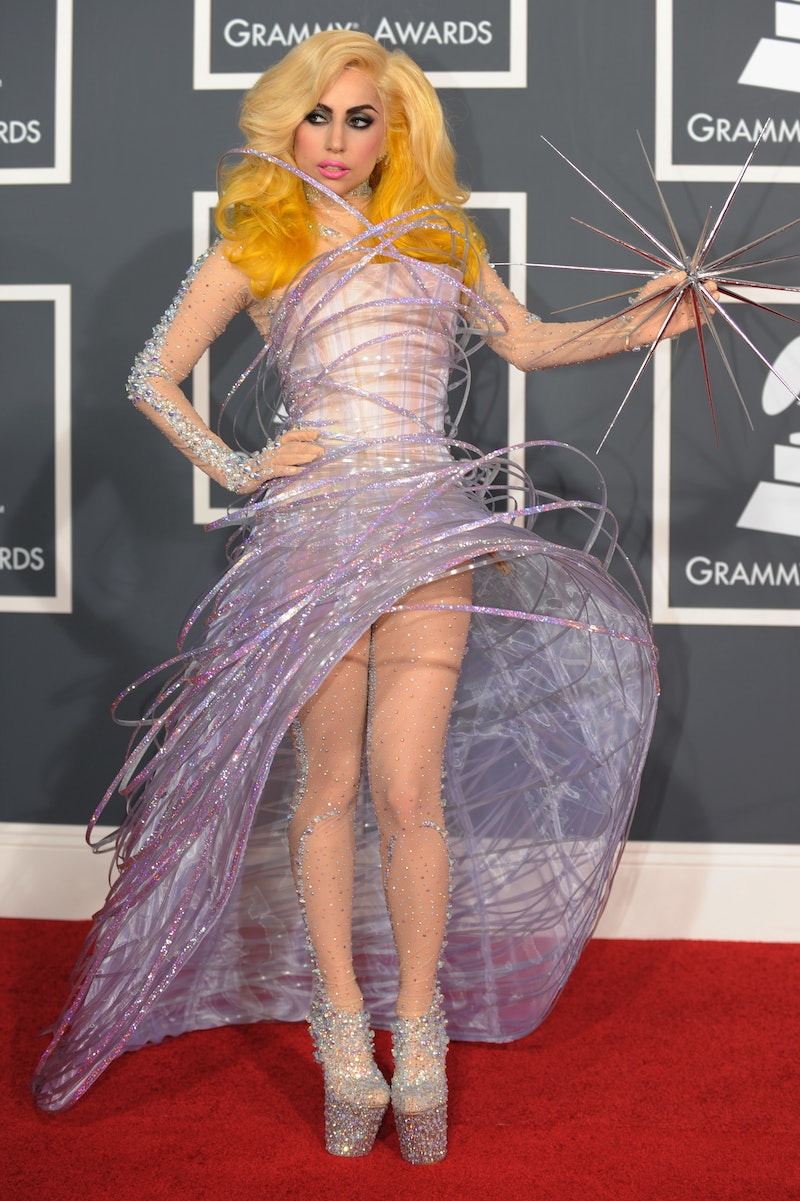 Lady Gaga is a lot of things when it comes to fashion, but safe is not one of them. However, the reason why Lady Gaga dresses as weird as she does might surprise her fans. Since the pop star burst onto the scene with her debut album The Fame in 2008, she's been known for two things: her music and her crazy fashion. And while many of her fans have embraced her risky fashion sense as an expression of confidence, the truth as revealed by the singer in her new Netflix documentary Gaga: Five Foot Two is actually quite the opposite.

Speaking in her new documentary, Lady Gaga reveals that her wacky fashion choices come out of a desire for control in an industry that loves to take control away from its artists. Her somewhat absurd red carpet fashions, like the red lace of her "Bad Romance" era or the 2010 Video Music Awards meat dress, aren't necessarily just fashion choices, they're an assertion of power by the artist. "What I've done is that when they wanted me to be sexy or they wanted me to be pop, I always f*cking put some absurd spin on it that made me feel like I'm still in control," she says.

As Gaga discusses in the documentary, her headline-grabbing fashion choices weren't just a form of self-expression, nor ways of getting press. Instead, her radical fashion and sometimes disturbing on-stage theatrics are the singer's way of reclaiming her fame. In the film, Gaga opens up about how the music industry and Hollywood treats women, particularly how men in positions of power, producers for example, think that female artists are there for their entertainment. "That's not why I'm here. I'm not a receptacle for your pain," she says. "I'm not just a place for you to put it."

To counteract those expectations of what a pop star should look like Gaga explains how she decided to show ugliness in fame while performing. "If I'm gonna be sexy on the VMAs and sing about the paparazzi," she says, "I'm gonna do it while I'm bleeding to death and reminding you of what fame did to Marilyn Monroe, the original Norma Jean, and what it did to Anna Nicole Smith."

This isn't the first time Gaga has opened up about the complexity behind her wild fashion. In 2015, the singer admitted that her loud outfits normally signify a loneliness or depression, especially as her style has changed over the years to be a bit more traditional. "There's always a dichotomy within me," she told Billboard. "If you see me dressing really out there, I tend to be self-deprecating inside. When I dress like a lady, I tend to be feeling very wild and confident."

Now, Gaga prefers a more toned down look. Gone are the 10-inch platforms, elaborate head pieces, and avant-garde makeup, she's traded all that in for a cooler color palette, simpler outfits, and a more natural look. This shift in style might just be the pop star growing up, but it's also a reflection of her most recent album, Joanne, which is featured heavily in Gaga: Five Foot Two. "This time, my style just stayed naturally how I've been in the studio," she explained in an interview with Culture magazine. "I started vehemently saying, 'Get these clothes out! I'm not wearing this! I'm not wearing heels!'"

For now, it looks like Gaga's Little Monsters should get used to a more natural Gaga. Maybe as her career has gotten more successful, she's been able to retain more artistic control, which means she feels less of a desire to assert her freedom through fashion. Or maybe this is just her look of the moment. Either way, Gaga's fans love her no matter what she chooses to put on her body.