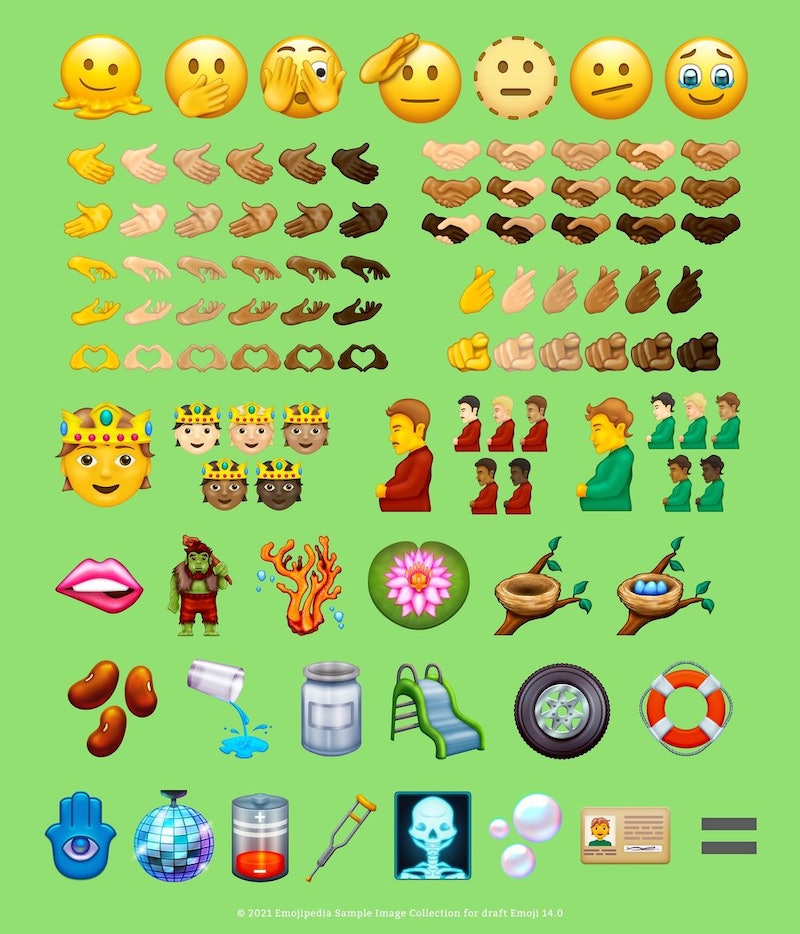 If you’re anything like me, emoji is your second language. I’m not kidding— I’m an expert in all the fun ways you can use an upside down smiley face emoji, what all the face emojis actually mean, or heck, how to create a vagina using emojis. If you can’t tell, I stan emoji. That’s why, when Unicode dropped its new emoji drafts for 2021, I already began planning how exactly I would use each new addition.

It’s important to keep in mind that this is only the draft emoji list expected, and there is a chance some items can change before the final approval and release on September 14, 2021. In “past years, the majority of draft emoji candidates end up included on the final list,” according to Emojipedia. The official blog also explains that this particular list has been “worked on for a longer period of time, after Unicode 14.0 was delayed due to COVID-19.”

Emojipedia has placed an emphasis on inclusivity in the past few years, and this release is no exception. “With the upcoming list, you’ll even be able to customize your handshake emoji with 15 combinations that use different skin tones,” Elite Daily reported. There are new non-binary emojis, including person with a crown joining the prince and princess emojis, Elite Daily noted, as well as a pregnant man and non-binary pregnant person.

The new emojis take a while to be finalized, so even after the official list is announced in September, it may take until Spring of 2022 for major platforms — like Facebook or your iPhone — to support the update, per Emojipedia. Even if it takes a while, we can still get excited for our new emojis in the interim. Here are the seven new 2021 Emojis I’m most excited to use, personally.

Parentheses and slash marks are no longer needed with the addition of the Face with Diagonal Mouth emoji.

You have your Prince and Princess emojis, but with the addition of the Person With Crown, royalty becomes more gender inclusive.

In addition to the Pregnant Woman, emoji will include a Pregnant Man and a Pregnant Person. Both additions will have a range of skin tones.

Spice up your sexts with this sensual Biting Lip emoji.

5. Index Pointing At The Viewer

I can’t tell you how many times I’ve needed this one.

Your phone is about to die — who has time to type that all out before it actually does?!

Switch it up from the same old classic heart emojis with these Heart Hands.