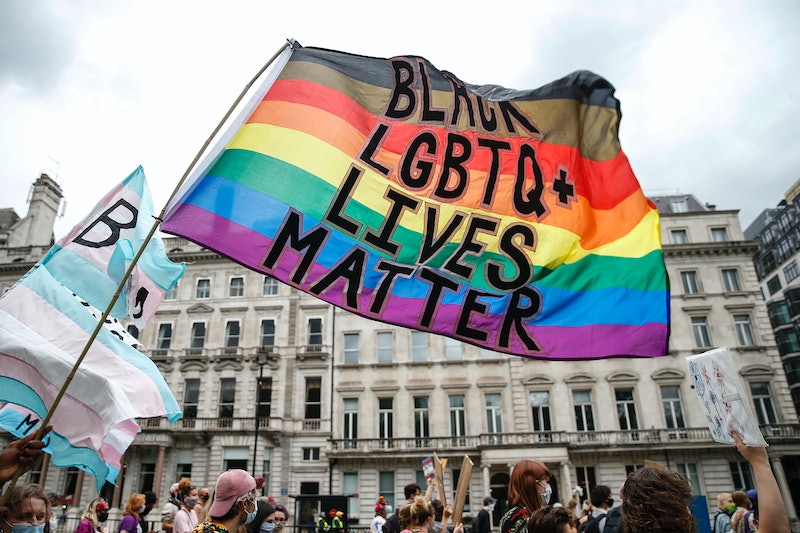 The sun isn't the only thing that comes out in June. Those familiar rainbow flags also start appearing in corporate office windows, coffee shops, and even your neighbor's front yard. June has been the unofficial month of celebratory queerness for decades. Though the origins of Pride Month span back to the '50s, President Bill Clinton officially made it "Gay and Lesbian Pride Month" in 2000. President Barack Obama made the commemorative time more inclusive in 2011, titling it Lesbian, Gay, Bisexual, and Transgender Pride Month. No matter the label, Pride Month has a rich history that directly informs how it’s observed today.

Pride Honors The Gay Rights Protests Of The '60s

When asked about when the gay rights movement in this country began, people tend to point to June 28, 1969: the night of the Stonewall Riots. Caitlin McCarthy, the archivist for The Center, an LGBTQ+ community center in New York City, explains that the Stonewall riot was one of many.

"QTPOC-led uprisings like those at Stonewall and The Haven in New York, Cooper Donuts and the Black Cat Tavern in LA, and Compton's Cafeteria in San Francisco were all responses to police harassment and brutality," McCarthy says.

At the time, people that cops perceived as men could be legally arrested for doing drag, and people that cops perceived as women could also be arrested if they were found wearing less than three pieces of "feminine clothing." In fact, police often raided bars to search for these alleged violations. On the summer night that most people cite as the origin of Pride, the patrons of the Stonewall Inn bar in New York City — led by trans women and femmes of color — fought back against another police raid.

Many people are familiar with the transformative activism of Marsha P. Johnson and Sylvia Rivera, McCarthy says. Johnson and Rivera co-founded STAR, the Street Transvestite Action Revolutionaries, which organized direct actions like sit-ins as well as provided shelter for trans sex workers and other LGBTQ+ homeless youth. Both activists were also members of the anti-capitalist, internationalist group the Gay Liberation Front (GLF), which organized marches, held dances to raise funds for queer people in need, and published a gay newspaper called Come Out! in 1969.

McCarthy tells Bustle that Johnson and Rivera's lesser-known (but not less important) siblings include Zazu Nova, a member of the GLF and STAR; Stormé Delarverie, a drag king and emcee for trans- and drag-centered touring company Jewel Box Revue; and Lani Ka'ahumanu, who founded the Bay Area Bisexual Network.

According to a 2006 article published in the journal American Sociological Review, "gay power" was a common slogan used in queer publications and at protests in the '60s and early '70s. Many local groups from the Black Power movement and radical queer organizing groups were able to unite against police brutality in the '70s. This collaboration makes the use of "gay power" at this time rather unsurprising.

"Radical organizing, influenced by and in concert with the antiracist and antiwar movement, followed [Stonewall]," McCarthy says. "The protests, sit-ins and direct actions conducted and participated in by early gay liberation groups such as Gay Liberation Front, Street Transvestite Action Revolutionaries, Dyketactics and Combahee River Collective demanded radical structural change in the face of continued oppression."

The National Historic Landmark Nomination for the Stonewall Inn, drawn up in 1999 for the United States Department of the Interior, also noted that "gay power" was used rather than "gay pride" in most settings. Though the activist Craig Schoonmaker is often credited with popularizing the phrase "gay pride" (as opposed to power) in 1970, it's worth noting that his organizing vision was exclusionary to lesbians. Today, "pride" is used as a shorthand to refer to LGBTQ+ celebrations and protests alike.

Despite these radical roots, corporate-sponsored Pride sunglasses and temporarily rainbow-splashed company logos are hallmarks of modern celebrations of Pride Month. Many people consider having big corporations sponsor commercialized Pride marches disrespectful to the history of Pride. To wit: The Stonewall riot that most people cite as the origin of Pride was a direct response to police raids and brutality, but Pride marches today tend to be accompanied by police escorts. In light of the 2020 Black Lives Matter protests, however, Pride organizations are reconsidering their positions on police at Pride, with some deciding to ban police officers from marching at Pride until certain racial justice reform requirements are met.

Many LGBTQ+ people note that one month of visibility out of 12 is not enough to ensure queer folks’ safety and equity while others argue that even a month of rainbow flags flying in your local Target is better than silence. (The radical founders of the Pride movement likely wouldn't have approved of silence, either.) Regardless of how you celebrate Pride, knowing its history can give you a fuller experience of the month — and a deeper appreciation for how it was made possible.

Caitlin McCarthy, archivist for The Center in New York City