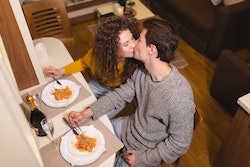 As anyone will tell you, dating in the digital age is complicated. Even if you’ve finally found someone who sparks your interest, you might feel totally mystified when it comes time to cross the hurdle from Hinge chat to IRL date. Or, how to ask your Hinge crush if they’ve deleted Hinge yet. Or, how to ask whether you’re exclusive yet, or if it’s time to debut the relationship on social media. Just when you might have thought you’d mastered the many limbos of modern love, there comes the question: How to caption a relationship soft launch on Instagram?

If you’re unfamiliar with what a soft launch is, you’ve probably seen one before and just didn’t notice. Something of a natural occurring online phenomenon, the term was first coined by comedian Rachel Sennott in summer 2020. She described the soft launch of a significant other by pointing to the context clues: “pic on story, elbow and side profile only.” A soft launch is defined by what’s missing from it: namely, an image of your new boo that, to your followers, very clearly shows that you’re in a relationship. By contrast, a soft launch subtly hints at the existence of a partner, but not enough to confirm it for people not already in the know. It’s the Instagram era’s way of saying, “I know my digital footprint is permanent, so I’m not ready to officially announce this relationship. But also, look how cute we are.”

A soft launch necessarily straddles the border of subtle and juicy, which makes captioning the ever-casual announcement so perplexing. Whether you’ve been eager to post a silhouette snapshot of your situationship on your story, or have the perfect casual couple pic for your photo dump, here’s some captions to soften the blow of your soft launch.

Just like the beloved board game, this caption adds some fun to your followers’ piecing together whose cropped smile and beer-stained polo that is in your story.

For the post that’s somewhere between soft launch and hard launch.

Sure, this one’s a little sappy for an early relationship. But if you and your soft launch-ee are already in the honeymoon phase, this is the perfect balance of affectionate and lighthearted.

4 .POV: You deleted your dating apps

There seems to be so many more steps now on the path to “going steady.” For couples that met online, deleting your apps is often a major milestone before the hard launch. If you’ve officially gone internet exclusive, celebrate with this playful caption.

5 .More clues on my crush

Another caption to poke fun at potential story sleuthers or giddy grid-viewers, let your followers know their inklings were correct by continue the breadcrumb trail with some more cropped snapshots of your crush.

In many ways, a soft launch really can feel like launching off into a new journey. Cut those jitters with some fun wordplay.

If your S/O is Very Much Online, they’ll appreciate the reference to this meme. Throw a question mark over their face on your story, and your followers just might start guessing who’s behind it.

Another caption that’s great for keeping up a covert trail of soft launch stories without fully crossing into hard launch territory.

The perfect caption if you’re not sure what the future holds but are certain they’ll be in it.

If you’re the type of person who consults with their BFFs about every potential suitor, this is the perfect playful nod to your friends — who are probably the most eager viewers of your soft launch, anyways.

If you want to really lean into this one, you can add a gif of the classic rainbow swirlie “loading” cursor over your S/O’s face.

If you just got the perfect couple pic with your S/O, but aren’t quite ready for the grid hard launch, you can easily pivot to a softer story launch with this caption.