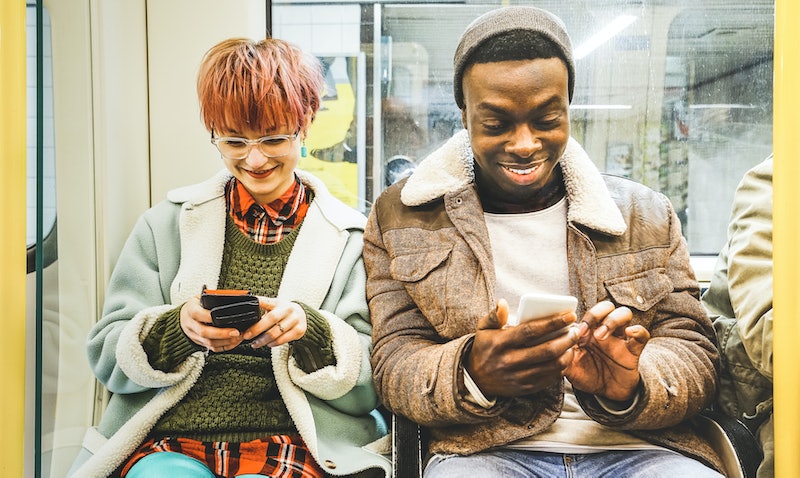 Being in a brand-new relationship comes with so many awesome benefits: getting to share new experiences together, having all those getting-to-know-you conversations, and just generally feeling the warm and fuzzy vibes of a new relationship. But thanks to modern dating, there's a pretty good chance you met your new boo on one of the dozens of dating apps out there, which leaves one serious question looming over both of you: when should you delete your dating apps after you start seeing someone?

According to a recent online survey by ReportLinker, six percent of people who are in a relationship are still registered on dating apps. While that percentage might seem small, it's nonetheless a reminder that dating apps have complicated things for singles trying to find love. When you get so used to swiping — on your morning commute, during your lunch break, at the gym — it can be hard to think of it as something other than a game or procrastination tool. "[Dating apps] have made online dating accessible and mainstream, but also more casual and entertainment-focused over relationship-focused," online dating expert Damona Hoffman tells Bustle.

While there's nothing wrong with using dating apps as a form of entertainment, it gets tricky when you meet someone you actually click with. You might feel uncomfortable knowing your new partner probably still has Tinder installed on their phone, but you might also worry that, after only a handful of weeks together, it's 'too soon' to define the relationship and ask them to delete their apps.

"Even if you're not swiping on your dating app, keeping it on your phone represents intrigue and opportunity and the presence of them on your phone can breed mistrust in your relationship," Hoffman says. "The apps should be deleted at the time you decide you are exclusive and you agree that you are not going to be dating anyone else."

Every relationship moves at a different pace, and there's no "right" or "wrong" time to become exclusive (if you want to be exclusive, that is). Even if things are still new, it's never too early to form good communication habits, and one way to do that is by having an open, honest conversation about boundaries and expectations. If you're in a new relationship and have been itching to hit 'delete' on all your dating apps, here are five tips to help your DTR convo go smoothly.