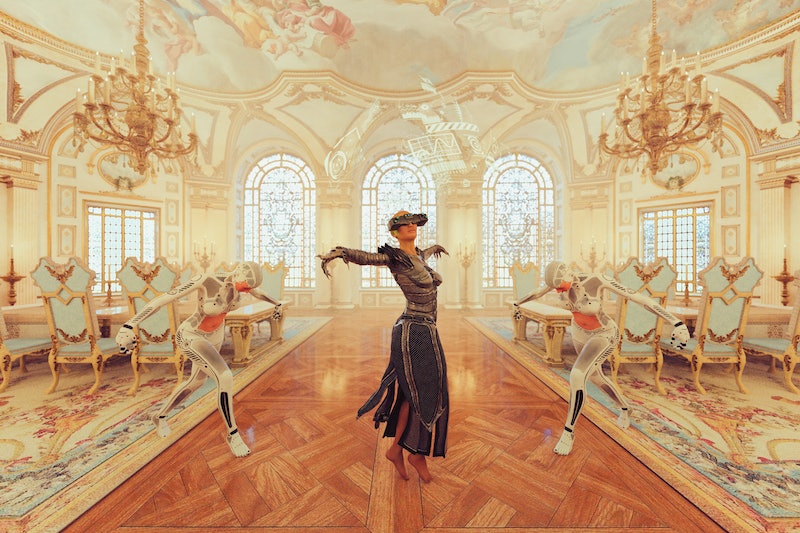 Prime real estate, mega yachts, Gucci bags: Many of the markers of extreme wealth have already transcended the physical world into virtual ones, where they're owned by the metaverse's one-percenters. While these high-sum online purchases may signify a similar path to accruing affluence in the digital universe as in the real world, what constitutes as “rich” in virtual scenarios is far less straightforward.

Virtual marketplaces and in-game purchases have long been a key component of video games and virtual realities. Art, clothing, and real estate can be purchased within the virtual world Second Life, founded in 2003, using an in-world currency called Linden Dollars; in the virtual world Roblox, first released in 2006, players can buy clothing, avatar hairstyles, and user-created games within the platform.

But the current dash to buy up virtual real estate or for brands to create a metaverse footprint differs from the virtual purchases of yore due to the speculative nature of these investments, says Wagner James Au, the author of the metaverse blog New World Notes and the book The Making of Second Life. Offline, only the richest can afford access to luxuries and lavish experiences, but virtually, social cache and community will carry more weight than status symbol NFTs, he says.

Some metaverse platforms with smaller user bases, like Decentraland and The Sandbox, both of which report 300,000 monthly active users (compared to the 43 million daily active Roblox users and Rec Room’s 37 million total users), are “driven by people putting down a lot of money on the assumption that the users are going to show up eventually,” Au says. “They’re mocking the NFT hype phase that we’re going through right now and the idea that we’re going to buy a virtual item that’s artificially made scarce on the assumption that there’s going to be a large market for it.”

Virtual plots of land or massive yachts won’t be signs of wealth in the metaverse if other users aren’t on the platform to witness it, especially if outsiders don’t see value in these items aside from their high price tags, Au says. “To me, the realization that these [metaverse] startups are missing is that community makes things valuable, social cohesion makes things valuable,” he says.

A more democratic version of affluence might emerge where creators within individual metaverse platforms create a game or experience and garner a genuine following of people, who will then purchase that creator’s goods within the metaverse. Au cites an example of a user from the platform VR Chat, known only as Jar, who built her own games there. The user’s games became so popular that she developed a following, launched a Patreon, and now earns thousands of dollars per month from patrons to create new VR Chat games. “To me, that’s more relevant in terms of value,” Au says. “People really love her creativity and are a community in themselves.” Not unlike the influencer economy on TikTok or Instagram where followers support their favorite creators, Au sees metaverse affluence as more akin to social capital that followers will spend real dollars to support.

Creators alone aren’t the only ones likely to cash in on metaverse wealth. Cathy Hackl, metaverse expert and tech futurist, sees the current metaverse and NFT boom as an opportunity for the average person to “own a piece of the future of the internet.” Those without the means or access to “traditional” investment opportunities, like stocks and real estate, can easily purchase a virtual horse to race on a digital track, for example, and hope it accrues value.

Hackl suggests those looking to make a metaverse purchase find a project they believe in with a supportive community and only invest disposable income they wouldn’t be upset to lose.

Thanks to tools that allow the public to see the value of the NFTs someone has purchased, Hackl believes NFT collection will factor into a person’s overall net worth. “The concept of flexing what you have is changing,” she says. “You’re going to see the high net worth individuals of the future not only want a physical Birkin bag but [also the] virtual versions of what the Birkin bag becomes. They’re not necessarily the same thing.”

But as for real-life brands looking to make their mark in the metaverse, Au maintains their success hinges on what they can offer in terms of user experience. Since virtual world and game users are typically in their teens and 20s, they typically don’t have the income to spend thousands of dollars on virtual Gucci bags or parcels of land. Instead, most metaverse users will be looking for a unique offering that signals social capital — like Vans’ virtual skate park in Roblox where players can skate in competitions and create their own custom Vans.

In lieu of expensive virtual goods, the true marker of power in the metaverse may just be clout and influence. But the metaverse as a real-world money-maker? That remains to be seen. “The overwhelming majority of people who use metaverse platforms,” Au says, “they’re doing it for fun” — not for the funds.