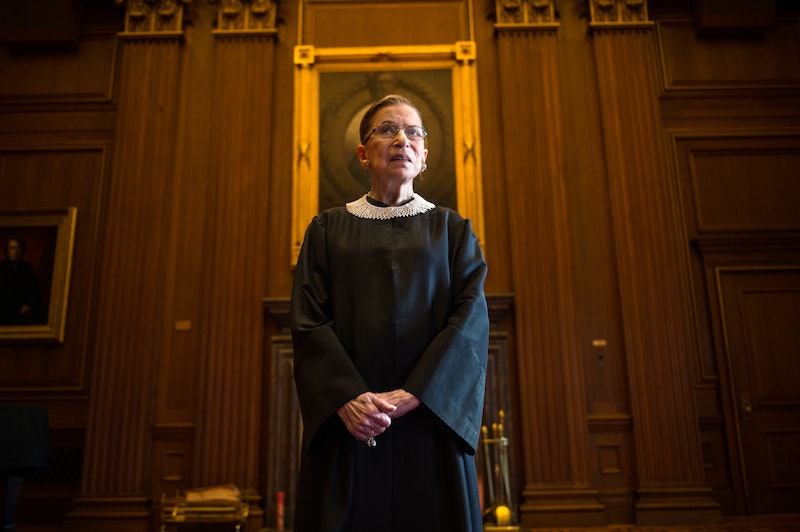 Justice Ruth Bader Ginsburg died on Sept. 18 at the age of 87 after due to complications of metastatic pancreas cancer. There were many reasons to love and admire Ruth Bader Ginsburg — she was the second woman to serve on the Supreme Court; she had a storied career full of glass-ceiling shattering and barrier-breaking; and she liked to drink wine before the State of the Union address.

Over the last few years, the internet embraced Ginsberg, and showered her with memes depicting her brilliance and intellectual prowess. RBG's quotes on equal rights, reproductive rights and being a strong woman have become feminist rallying cries. And you can't overlook the characterization she is most known for, as the "Notorious RBG."

She was a fierce defender of the principles she holds to be true, but still maintained a close friendship with the justice she had probably had least in common with in terms of their legal interpretation approaches, Antonin Scalia. She's was a nuanced woman with the strength of someone half her age, and the memes dedicated to her show the mark she made on this and future generations of ambitious women.

Ginsburg was a fountain of motivation.

After Donald Trump called the judge who blocked his travel ban a "so-called judge," you can only imagine what RGB had to say about that.

That's an oath you can get behind.

4. Keep Your Head Up

Ginsburg knows you can't let the small stuff distract you from your goals.

6. Fighting For Every Voice

Ginsburg was stalwartly committed to equality.

Cocktails were poured in her honor.

8. Dissent Does Not Make You Disagreeable

This children's book about Ginsburg's life and career teaches kids about the importance of standing up for what you believe in.

It's not a privilege for women to be at the table, it's a right.

RBG did not allow your mainsplaining.

Persistence is important, but so is passion.

Ginsburg shrugged off the perception that a nine-woman Supreme Court would be shocking.

13. Sweating To The Oldies

Ginsburg's workout regimen was no joke. Politico sent a reporter to workout with RBG's trainer, and he barely lived to tell the tale.

The perfect homage to female leaders.

Young girls dressing up as Ginsburg is as heart-warming as it is adorable.

Saturday Night Live's Kate McKinnon as Ginsburg chugged Emergen-C and dished out "Ginsburns" to Mike Pence and others.

It doesn't get better than the classic Notorious RGB meme.

This article was originally published on March 14, 2017