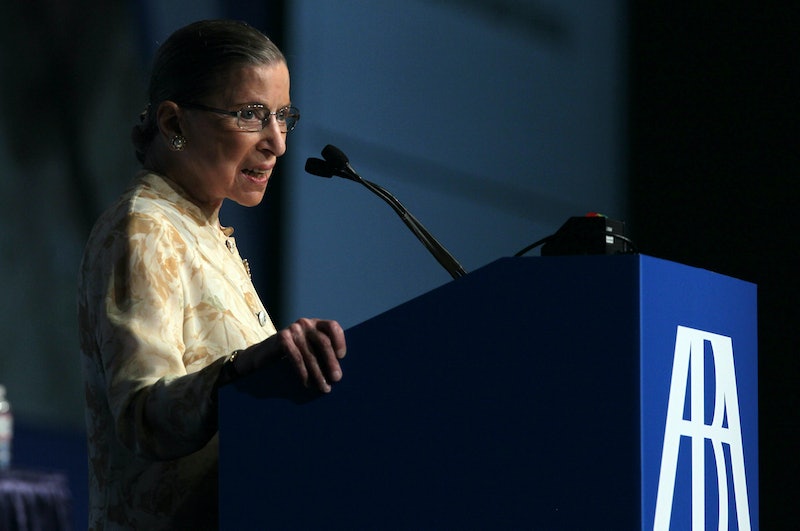 Supreme Court justice Ruth Bader Ginsburg died on Friday, Sept. 18, due to complications of metastatic pancreas cancer, the Supreme Court said. Born in 1933, the SCOTUS member has seen the world change, and was often known for her response to it -- whether it be via dissent, inspirational quote, or viral meme.

Known as "the notorious RBG" to her fans, Bader Ginsburg was born to a working-class Jewish family in Brooklyn. Despite her academic success (she graduated first in her class at Cornell and Harvard Law), she faced gender discrimination due to the misogyny of the era. She balanced being a mother and the first female president of the Harvard Law Review, and went on to become an integral part of the American Civil Liberties Union's Women's Rights Project before being appointed to the D.C. Circuit Court of Appeals by President Carter in 1980. As the second woman to be nominated to the Supreme Court in 1993, Ginsburg has been a champion of civil rights throughout her entire career.

As many search for the right words to honor the feminist icon, her own statements speak volumes about the type of life and career she's had, as well as what this generation of civil rights fighters can learn from her. From excerpts of moving essays she wrote as a teenager about the horrors of the Holocaust to her best life advice, here are the best Ruth Bader Ginsburg quotes.

1. "People ask me sometimes, when — when do you think it will it be enough? When will there be enough women on the court? And my answer is when there are nine." - A 2015 conversation at Georgetown University Law School

2. "One thing that concerns me is that today’s young women don’t seem to care that we have a fundamental instrument of government that makes no express statement about the equal citizenship stature of men and women. They know there are no closed doors anymore, and they may take for granted the rights that they have." - A 2014 Interview The New Republic

3. "I always thought that there was nothing an antifeminist would want more than to have women only in women’s organizations, in their own little corner empathizing with each other and not touching a man’s world. If you’re going to change things, you have to be with the people who hold the levers." - A 2009 New York Times interview

4. "Just as buildings in California have a greater need to be earthquake proofed, places where there is greater racial polarization in voting have a greater need for prophylactic measures to prevent purposeful race discrimination." -Dissenting Opinion In The Court's 2013 Decision To roll back some protections from the Voting Rights Act.

5. "No one who is in business for profit can foist his or her beliefs on a workforce that includes many people who do not share those beliefs." -A 2014 Interview with The New Republic

6. "I think our system is being polluted by money." - A 2015 interview with The Guardian

7. "I was fortunate to be a child, a Jewish child, safely in America during the Holocaust. Our nation learned from Hitler’s racism and, in time, embarked on a mission to end law-sanctioned discrimination in our own country. In the aftermath of World War II, in the Civil Rights movement of the 1950s and 1960s, in the burgeoning Women’s Rights movement of the 1970s, "We the People" expanded to include all of humankind, to embrace all the people of this great nation. Our motto, E Pluribus Unum, of many one, signals our appreciation that we are the richer for the religious, ethnic, and racial diversity of our citizens." -2004 Holocaust Day of Remembrance speech at The Holocaust Memorial Museum

9. "I was a law school teacher. And that’s how I regard my role here with my colleagues, who haven’t had the experience of growing up female and don’t fully appreciate the arbitrary barriers that have been put in women’s way." - A 2015 Bloomberg interview

10. "Reproductive choice has to be straightened out. There will never be a woman of means without choice anymore. That just seems to me so obvious. The states that changed their abortion laws before Roe are not going to change back. So we have a policy that only affects poor women, and it can never be otherwise." - A 2009 New York Times interview

11. "If there was one decision I would overrule, it would be Citizens United. I think the notion that we have all the democracy that money can buy strays so far from what our democracy is supposed to be." -A 2014 Interview with The New Republic

12. "My mother told me to be a lady and for her, that meant be your own person, be independent." - An interview with NPR's Nina Totenberg

13. "The side that wants to take the choice away from women and give it to the state, they’re fighting a losing battle. Time is on the side of change." A 2009 New York Times interview

14. "Yet, dare we be at ease? We are part of a world whose unity has been almost completely shattered. No one can feel free from danger and destruction until the many torn threads of civilization are bound together again. We cannot feel safer until every nation, regardless of weapons or power, will meet together in good faith, the people worthy of mutual association." - My Own Words, 2016

15. "If I had any talent in the world, any talent that God could give me, I would be a great diva." - A 2015 conversation at Georgetown University Law School

16. "You can't have it all, all at once. Who—man or woman—has it all, all at once? Over my lifespan I think I have had it all. But in different periods of time things were rough. And if you have a caring life partner, you help the other person when that person needs it." - 2014 interview with Katie Couric

17. "Yet what greater defeat could we suffer than to come to resemble the forces we oppose in their disrespect for human dignity?" - My Own Words, 2016

18. “In my life, what I find most satisfying is that I was part of a movement that made life better, not just for women … gender discrimination is bad for everyone.” -Notorious RBG: The Life and Times of Ruth Bader Ginsburg, 2015

19. “Women belong in all places where decisions are being made. It shouldn’t be that women are the exception.” -A 2009 interview with USA Today

More like this
What The Lionesses’ Win Really Means For The Future Of Football
By Angelina Kelly
Jiu Jitsu Champ Kim Blake Is Pushing For More Women In The Sport
By Kathleen Ferraro
Talking About Mental Health In Sport Is Crucial, Says England Legend Karen Carney
By Sam Ramsden
Meet The Young Leaders Fighting For Global Change
By Sam Ramsden
Get Even More From Bustle — Sign Up For The Newsletter

This article was originally published on March 16, 2017