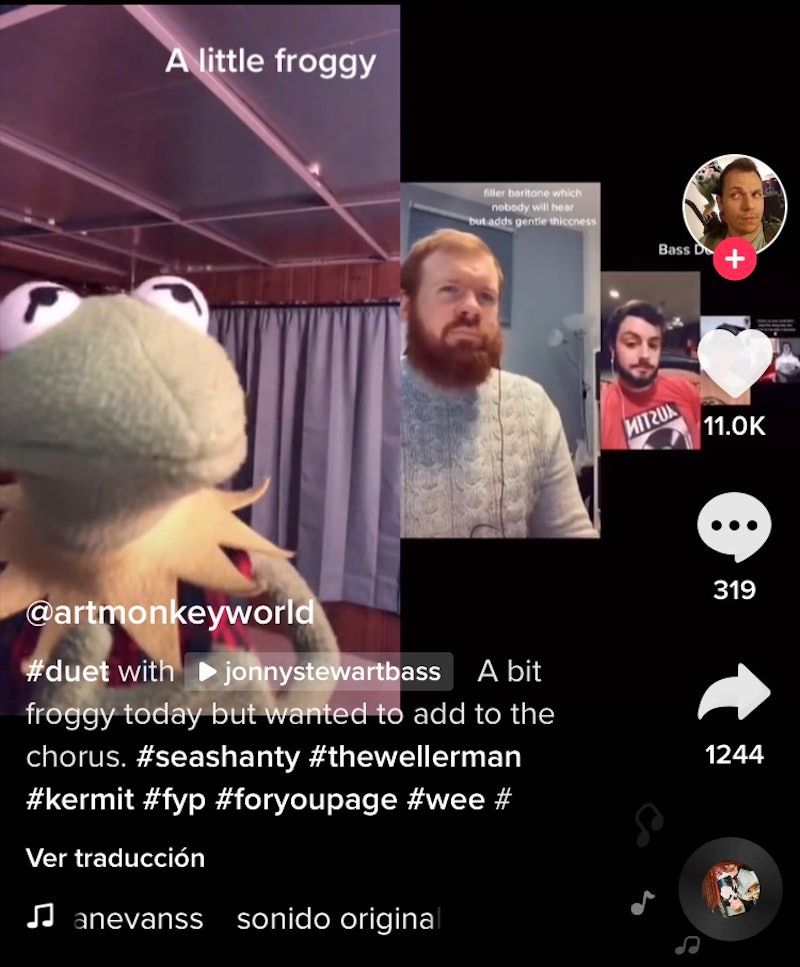 The morning of Jan. 12, I woke up with a simple phrase stuck in my head: “Soon may the wellerman come, the wellerman come, to bring us sugar and tea and rum,” or the refrain of the sea shanty that’s been all over my TikTok for what feels like months. Little did I know that Jan. 12 was the fateful day that the rest of the internet would catch up to sea shanty TikTok, thanks to a now-viral tweet featuring two brothers singing “Wellerman,” one of the more popular sea shanties I quoted above.

TikToks of people singing sea shanties — songs sung by sailors and other seafaring laborers to help them synchronize movements, says the BBC — have proliferated on alt TikTok for months now. Often, there’s some kind of self-aware caption (“Your #ForYou page: Charli D’Amelio. My #ForYou page? Sea Shanties”) that acknowledges that, well, it’s a bit of a niche interest, isn’t it?

Steam for the current sea-shanty renaissance began gathering a few weeks ago, when Scottish musician Nathan Evans posted a version singing “Wellerman." The original video has since been duetted by people adding layers of bass, baritone, or even Kermit to the track. I really don’t know the first thing about music, but trust me when I say it is satisfying to listen to and catchy as hell. A ton of different duets went viral, and since people keep making them, it’s only a matter of time before you find them on your #ForYou page.

The broader ‘net crossover happened on Jan. 11, @beertheist tweeted that viral TikTok of those two brothers listening to “Wellerman” in a car. (Technically, the TikTok is a recording of a Snapchat; let’s pause for a second to reflect on how impossible it would be to describe this situation to anyone as recently as 2010.) The caption on the Snapchat/TikTok/Tweet starts off questioning why the driver, who’s absolutely vibing to the shanty, has the aux cord; midway through, the video-taker admits in a new caption that it’s actually kinda lit.

The man is right. Now, pockets of culture that would otherwise be swooning over Olivia Rodrigo’s “drivers license” are exploring the wonderful world of #ShantyTok — and questioning why digital culture pivoted to sea shanties, exactly. Seeing this shift yesterday, I was overcome with not quite FOMO, not quite jealousy, but the distinct sour grapes of having been into something before it was cool, OK!?

As I watched pithy tweets roll in like fog off the wine dark sea, I reflected on why I started smashing the like on these videos months ago. Yes, the songs are absolute bops. Yes, the TikToks helped me train my algorithm away from Straight TikTok, or at least they did. But what makes them resonate so widely now?

For one, Americans are still grappling with the aftermath of a violent attempted coup, a statement that in itself has pretty strong 1800s energy, and if there’s anything Americans love, it’s an absurdist escape from a devastating news cycle. Kathryn VanArendonk, writing for Vulture, calls sea shanties “unifying, survivalist songs,” which, put in context with the fact that gathering in groups continues to be unsafe, tugs more deeply on the thread of escapism.

But net-net (ahem), sea shanties rule, whether or not there’s some deeper meaning behind why we’re all suddenly obsessed. And as a noted sea shanty devotee, I say: welcome, one and all, to the best side of TikTok.

More like this
Ashamed Of Your Screen Time Stats? Here's How To Change That
By Alexis Morillo
Learning To Love, Not Judge, The Lunchbox Wives Of TikTok
By Esther Zuckerman
11 Super Bowl Instagram Captions To Use On Game Day — Even If You Don’t Like Sports
By Alexis Morillo
The Internet Is Obsessed With These LEGO Flowers — Here’s Where To Buy Them
By Alexis Morillo
Get Even More From Bustle — Sign Up For The Newsletter
From hair trends to relationship advice, our daily newsletter has everything you need to sound like a person who’s on TikTok, even if you aren’t.