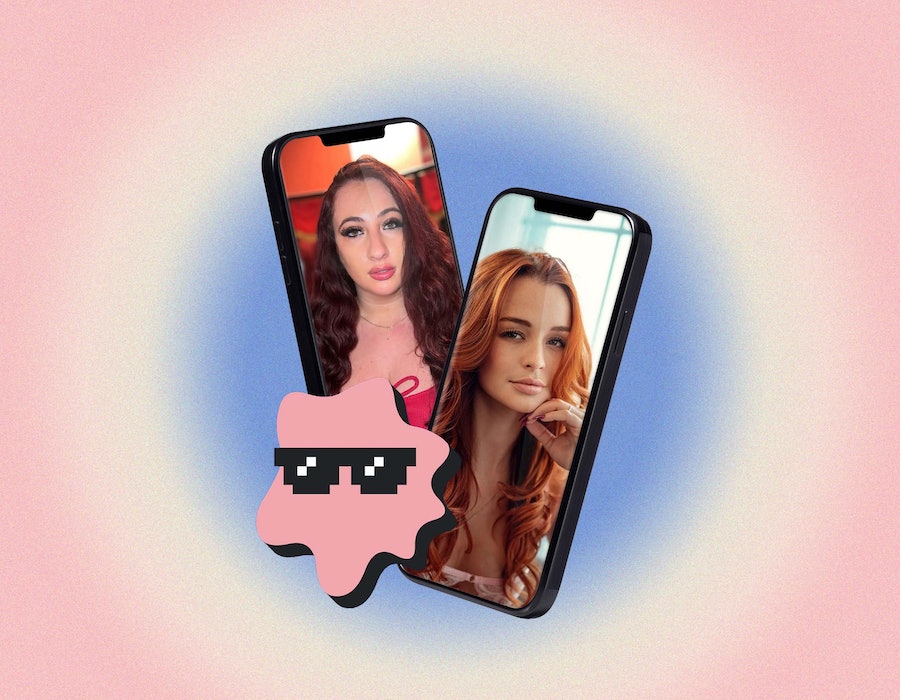 Bessa Lee is known lovingly as Brat to her 500K Instagram followers, her 115K OnlyFans subscribers (spread across two accounts), and the unknown numbers of owners of merch emblazoned with images of her backside. But in September 2021, when Brat’s Instagram page was deactivated for “sexual content,” the 28-year-old erotic model was in trouble, as brand deals and months of income all hung in the balance. For anyone who shares spicy content on Instagram, the threat of deleted posts and deactivated accounts always looms large — and Brat, who’d created several backups, thought she was prepared. Slowly, however, those were censored, too.

After submitting dozens of forms to the app and paying thousands of dollars to scammers with empty promises of reviving her page, she finally got back her account a year later. But the damage was done: She not only lost money, she lost faith in a platform that otherwise had been her biggest source of income.

“It was tough, and I had no hope,” she says on Zoom from her bedroom in Philadelphia.

Brat is one of many adult content creators who feel uneasy about the seemingly sporadic and subjective censorship of apps like Instagram and TikTok, and who are hungry for new platforms that can offer better tools, clearer guidelines, and more freedom of expression.

And some developers have begun to take notice. The men behind SLUSHY, a new content creation app, saw an opportunity to disrupt the paywalled content industry with a new kind of social media platform that doesn’t rely on ads. This allows creators to “have fun and make money,” CEO David Gross tells Bustle. CMO Josh Metz, who was on the founding team of Tinder, says the app’s user base has tripled month over month since launching in July.

In October 2022, as Brat was still rebounding from the loss of her most profitable Instagram feed, a male friend who happened to know SLUSHY’s founders suggested she create an account with the new app. A member of SLUSHY’s creator success team helped her establish one and quickly publish her first few posts, then coached her on how to subtly advertise SLUSHY on her other social media platforms, where cross-platform promotion is sometimes the target of censorship. “Call it ‘a TikTok with no guidelines,’” the SLUSHY team member told Brat.

When Milliye opens SLUSHY on her phone over Zoom, an image of a young woman with braids and a low-cut purple sweater pops up. “That’s the featured girl for right now,” Milliye says, explaining that SLUSHY highlights different models and rotates through them daily, giving users the option to click on the creator’s page or click through to the feed.

Milliye chooses the latter, and the resemblance to TikTok is immediately striking: She scrolls through a colorful string of short, infinitely repeating videos, and an Explore page that echoes the “For You” page that TikTokers have learned to love. Gross explains that SLUSHY tracks user activity and feeds people content based on likes, similar to TikTok’s algorithm.

But SLUSHY isn’t a TikTok wannabe. While the video app has some borderline-porn content depending on where you look, SLUSHY is an endless scroll of butts and boobs clad in sexy costumes, lingerie, bikinis, or nothing at all. Like OnlyFans, SLUSHY creators charge users for their content directly on the app. Also like OnlyFans, the platform keeps 20% of creators’ profits. Posts are priced anywhere between $4.99 to $80 or more, and users can subscribe to specific creators for a monthly fee, too. Some images, like one of Milliye’s exposed breasts, are blurred out for subscriber-only access, while others are locked and can be accessed with one-time payment. Some posts are free and help generate a following, like Brat’s top-performing one, featuring her bent over in cow-print assless chaps.

Metz says SLUSHY’s long-term vision is to give creators the space to evolve their work beyond posts on the app. One business might require a merch line with delivery capability, while another might require email newsletter functions. “We want to create a place where the creator has all of those functionalities at their fingertips,” Metz says.

The founders say that advertising budgets for brands are shrinking across the board, and that, in response, social media is generally trending toward paywalled content. Because SLUSHY doesn’t rely on money from advertisers, it isn’t beholden to what Gross calls those “kind of weird, opaque” guidelines that can silence users on other platforms.

“A TikTok With No Guidelines”

Instagram’s official community guidelines clearly state that nudity is not allowed, including content that shows “sexual intercourse, genitals, and close-ups of fully-nude buttocks.” But some critics have pointed out that the app is full of sexually suggestive images of mostly thin, white women, which appear to be monitored less heavily than similar images of women of color and size. Model and activist Nyome Nicholas-Williams, who is plus-size and Black, successfully lobbied to get Instagram to change its guidelines around “breast-squeezing” because she felt it unfairly impacted fat women. Brat, who describes herself as a bigger model, wonders if her shape also contributed to the harsh censorship that she’s faced.

While SLUSHY is bursting with sexy content, the founders believe the app will be attractive to influencers who “lend themselves more to a sexualized view,” as well as other types of creators: gamblers, people who swear a lot in their videos, and comedians whose jokes are considered by some to be bigoted. Gross offers the example of Dave Chapelle, whose “certain type of inappropriate joke” might not go over well on another social media site.

“It lends itself very well to categories where you would have trouble on other platforms,” Gross explains, emphasizing the “freedom of speech and expression” SLUSHY offers its creators. And though it could be argued that similarly lax guidelines on sites like 4Chan and QAnon have contributed to the rise of online hate groups, SLUSHY’s founders insist that theirs are not an invitation for extremists to exploit the space — and that by virtue of being a marketplace, SLUSHY will self-regulate.

Ultimately, Metz says, it’s still early days for SLUSHY. Over time, the team hopes to bring more women into their investor pool and to expand its user and creator bases to include more diverse bodies, especially when it comes to size and race.

The founders maintain that SLUSHY’s invite-only element is simply to ensure that they’re bringing on creators who “are looking to do this professionally as an entrepreneur,” Gross explains. “It’s not really for just anybody to come up in here and post a photo of your lunch.”

SLUSHY, he says, is meant for “the professional people who want to do photo shoots or do lessons or paywall content that people would deem valuable and worthy of selling.”

The creators, after all, are more than just creators to him, he says. “I think now is the right time to call these people entrepreneurs. They are businesses,” Gross says. “That’s our vision of these people. We treat them like entrepreneurs.”

While Milliye continues to fight for her place on other sites, she’s made about $3,000 in her first four months on SLUSHY, thanks in part to its built-in promotion features and lack of censorship. “Within a few hours that I was on the platform, without having to promote it anywhere, I already had followers, I already had subscribers,” she says. “And I’m still growing every day. It’s really fun.”