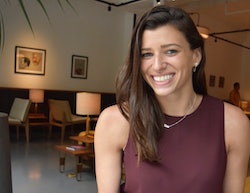 In college, Sofia Gross was always “the girl Snapchatting at parties,” she tells me with a laugh. But Gross was also a serious varsity diver who spent her weekends canvassing for politicians on Chicago’s South Side — which, during midwestern winters, meant posting up in apartment lobbies so her hands could thaw out between knocking on doors. Two presidential elections later, the 28-year-old has married those two interests as Snap’s first-ever head of policy partnerships and social impact, a job that involves getting Snapchatters all the resources they need to be engaged citizens.

For Gross, who drops the word “civics” 10-plus times in our 45-minute conversation, civic engagement means seeing how politics, social justice, and mental health are all intertwined. Working on Snap’s Public Policy team, Gross has built geofilters prompting users to register to vote, and responded early to COVID by launching Here For You, providing in-app info to Snapchatters who needed mental health or emotional support. Lately, she’s been busy preparing for Mental Health Action Day on May 20; Snap, as a founding partner, developed a filter with mental health organization Active Minds encouraging users to talk about their emotional wellbeing, or support friends in doing so, in-app and IRL.

“Finding different ways to integrate civic experiences into the platform at Snapchat, given the unique demographic of Americans we reach, has been incredibly empowering,” Gross says.

Working at the intersection of tech, politics, and activism is the result of “figuring out what that thing is that I believe in … at a very young age.” Here, Gross, a quintessential Taurus in her bullish drive, describes her career trajectory and the quirky work-from-home set up that keeps her centered.

Tell me about getting your job at Snap. How did it turn into what it is?

I was a huge political nerd my whole life. When I was a senior in college, I thought I was going to work on the 2016 campaign trail. But then Snapchat’s first head of news, Peter Hamby, came to speak on campus to talk about the power of citizen journalism, and he was starting up a team. I got a job as a journalist for my first nine months working at Snapchat, covering the 2016 primary to introduce our audience to the role they had to play in the electoral process.

We would take a Snap of Hillary Clinton at the Iowa State Fair and her team would be amazed at the reach we had with first-time voters, who were typically impossible to hit. I started helping the candidates understand how to speak to those voters through Snapchat, which is not the job of the journalist. I joined the public policy team and moved to Washington, D.C., a few years later.

When did you start being a “huge political nerd?”

Credit to my mom — I grew up having The New York Times on the coffee table, CNN on in the background. My most formative college moments were spending my weekends canvassing for political campaigns on the South Side of Chicago. It taught me so many lessons that helped shape my career. Once you’ve gotten yelled at by strangers and had doors slammed in your face while door-knocking, asking for things and being OK with rejection is empowering.

What other kinds of lessons have gotten you through your work journey?

I got one of the best pieces of advice I was ever given in college. David Axelrod, who runs the Institute of Politics at the University of Chicago, always told us to find something you really believe in. Is that a candidate or a campaign? Is it an issue? Is it a product? If you’re working for something you believe in, what a gift work becomes. I'm so grateful that at a very young age, I was able to find that thing, which is civic engagement, our democracy, and trying to find ways to help increase voter participation.

Between the pandemic and the election, it’s been, uh, a stressful year. Did you have any coping mechanisms that got you through?

My mom will laugh when she reads this, but she's always called me a pressure cooker. I live for high-stress moments. My North Star throughout the pandemic and the election was how lucky I am to play such a critical role to help empower people to take action on the thing they care about, whether it's mental health, racial justice, or direct civic engagement.

I also got a treadmill desk, which I will say has been a game-changer. I miss working with people. It’s helped me with getting my energy out.

I was going to ask if there was anything weird or surprising in your work-from-home set up, but I guess you answered that!

I feel like most people who know me totally expect the treadmill desk thing.

Let me pull up my Trello board. I'm working on a really cool civics program we'll be launching in the fall. My expenses are constantly on my to-do list. I'm working a lot on professional development, learning about how to be a better leader, a better manager. I just read Think Again by Adam Grant, which I loved. It’s about not being afraid to reorient yourself. I always make this joke, but it turns out a lot of those self-help books are actually very helpful.

I literally wake up with new ideas around civic engagement, democracy, and the youth vote. For people who are figuring out their journey, finding that thing you're passionate about, that you truly believe in, and then finding your champion who wants to drive it forward is so critical. But then of course, you have to roll up your sleeves to do the work.