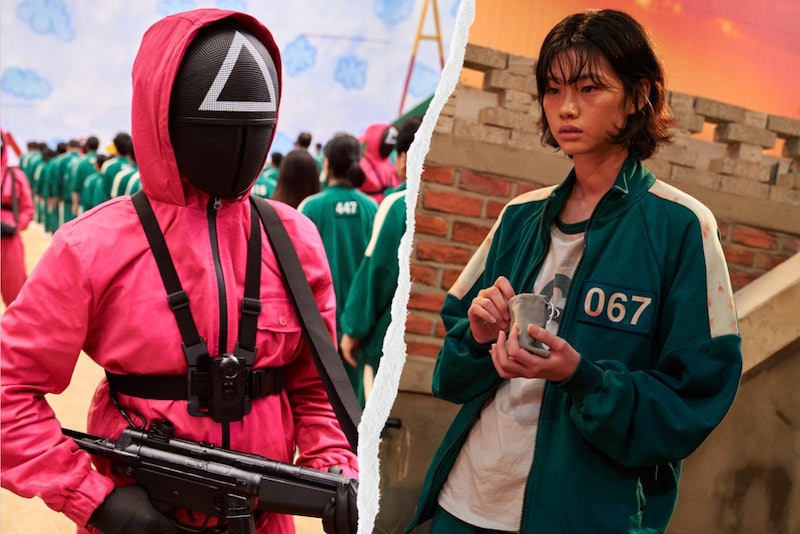 Quickly after its September 2021 premiere, Squid Game made international waves for its gripping suspense and, of course, gruesome ends for many of the characters. After its global fanfare, it was confirmed in June 2022 that it will be coming back for a Season 2. The psychological thriller follows a fictional game in which contestants play a series of children’s games for a large cash prize. While many who are desperate to turn their lives around enter the competition determined to win, it soon becomes clear that they may lose their lives in the process.

Beyond the high stakes, compelling backstories, and insightful themes, one of the striking elements of the show was its high production value. With vibrant, intricate sets and an entire hierarchy of participants whose uniforms are highly significant, the internet exploded with Squid Game-inspired Halloween costumes following its release. While the show premiered on Netflix only a month before Halloween 2021, it’s clear fans didn’t let the time crunch stop them from trying to pull off the perfect costume — just ask stars like Rebel Wilson.

Whether you’re ready to throw on a pink hazmat suit and fencing mask to order around your friends as a guard, want to wear a contestant tracksuit to up the stakes of your trick-or-treating, or plan to control the party vibes as the ominous masked Front Man, there’s plenty of ways to take your own spin on a Squid Game costume. Here are some Squid Game-inspired Halloween costumes that are as eerie as they are buzz-worthy.

Rebel Wilson attended a Squid Game-themed Halloween party in 2021. She dressed as a games contestant and participated in competitions like Red Light Green Light.

Breathe some new life into a classic Grim Reaper Halloween costume by arriving as Squid Game’s Front Man. The Front Man oversees each challenge of the Squid Game from a monitor, with his black mask and hood making him appear eerily indifferent as he orchestrates competitors' demise. To complete this look, take a back seat at your Halloween party and mysteriously observe your fellow partygoers to keep them on their toes.

The guards represent a unique facet of the Squid Game hierarchy. While they enforce the rules, they themselves are also cogs working within the system of the game... which calls into question how much agency truly comes with their authority. Regardless, the middle men are extremely creepy, especially given the contrast of their faceless masks and bright, hot pink suits. Think carefully about the shape on your mask — apparently there’s more meaning to these symbols than one might think. According to Squid Game creator Hwang Dong-Hyuk, the circle masks indicate worker guards, the triangles symbolize armed soldiers, and masks with a square represent managers.

While it’s not quite as spooky to dress as the prey in this game, it makes sense why so many would want to take this route when dressing up in a Squid Game-themed costume. Whether you want to emulate a character you find heroic, like Abdul Ali (199), or want to let others know you’re a lone wolf like Kang Sae-byeok (067), all you really need to do to differentiate yourself is tape the corresponding number of your character to a green tracksuit. For some added distinctions, you might consider adding a pair of wire-framed glasses to dress as Cho Sang-woo (218), some elderly makeup for Oh Il-nam (001), or a face tattoo for Jang Deok-su (101).

If you want to bring some competition to the party, make some Dalgona candy and challenge other tracksuit wearers to cut out the shapes. IYKYK.