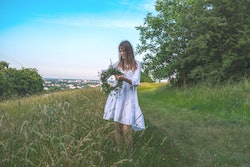 The summer solstice, which falls on June 21 in 2022, is a fancy term for the first day of summer. It marks the point when the sun is at its highest peak in the sky, and for those in the Northern Hemisphere, it’s also the longest day of the year. But the summer solstice is more than a seasonal shift — it also heralds changes and new beginnings. Based on the cosmic forecast, the spiritual meaning of the 2022 summer solstice is about finding balance in your life and mustering up the courage to be the boldest version of yourself.

In Latin, solstice means "sun standing still," which references the fact that the sun is out for the longest amount of time of the year. Ancient Celtic, Greek, and Roman cultures have observed midsummer for different reasons, from religious ceremonies to timing crop cycles. Today, the summer solstice is an important day in many cultures in the Northern hemisphere: You can’t forget that the 2019 horror movie Midsommar is set during Sweden’s summer solstice festival (which, of course, isn’t so cult-y in real life).

These spiritual meanings are the reasons why so many cultures dedicated rituals and festivals to the summer solstice. In fact, ancient monuments are believed to have been designed just to align with the sun during the solstice — like Stonehenge, the 5,000-year-old stone circle in Wiltshire, England. In folklore, the spiritual meaning of the summer solstice is one of celebration — for the brightest and longest day of the year, for summer and the coming harvest, and more.

The summer solstice’s spiritual meaning has another layer when you factor in astrology. With Venus, the planet of love and balance, on its way to free-spirited Gemini on June 22, you can expect the start of summer to be nothing short of light-hearted fun. The jovial energy is amplified by lucky Jupiter as it crosses into gutsy Aries, empowering us to charge through summer with confidence.

You don't have to travel far to take part in summer solstice celebrations — you can do them right in your own home. Here are the spiritual meanings behind the summer solstice 2022.