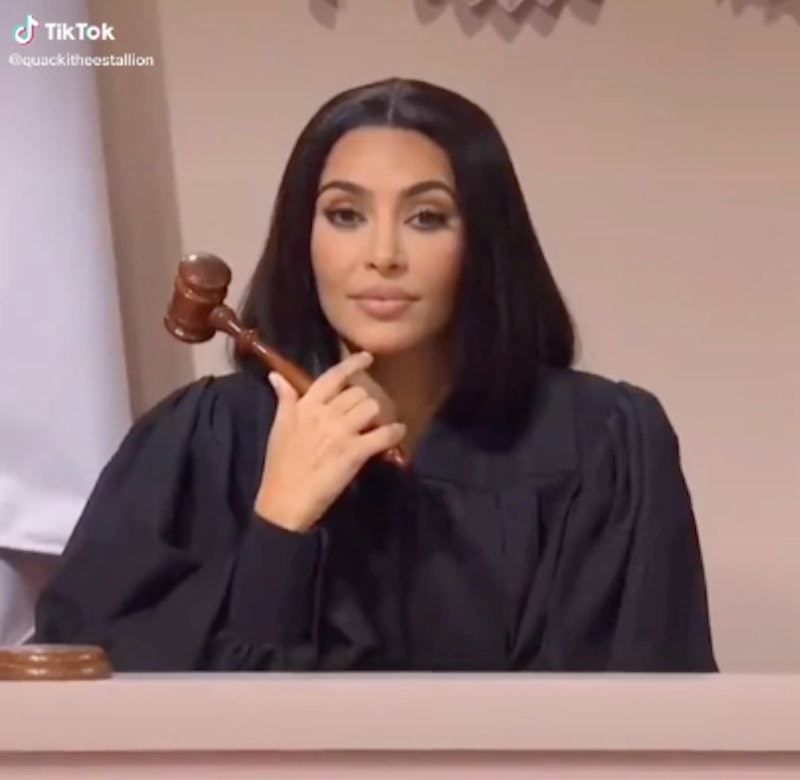 ‘Tis the season for a fresh-off-the-mic Kardashian sound bite trending on TikTok, brought to you by none other than Queen Kim herself. It seems like just yesterday (because it kind of... was?) that TikTok was overflowing with videos of Kris Jenner lip-syncing to “Lady Marmalade” in a 2022 version of Rickrolling that was aptly dubbed “getting Krissed” or “Krissing.” And back in March, there was the downright legendary “It seems like nobody wants to work these days” sound that originated from a video interview of Variety’s “Uncovered,” in which Kris Jenner and Kourtney, Kim, and Khloe Kardashian shared their tips for women in business. In short, it’s safe to say that Kardashian sounds tend to strike gold pretty much every time.

If you haven’t heard, the latest TikTok-viral sound is just Kim saying, “Ew, that is so cringe. Guilty.” The clip stems from a Saturday Night Live segment from Oct. 9, 2021, where Kim stars as her sister Kourtney in a mock rendition of a hypothetical TV show called The People’s Kourt. Serving as a judge settling family disputes, Kim as Kourtney dropped the now-trending sound that has already been used in over 153,000 videos after being posted back in Dec. 2021. The general theme of the trend so far? Users embracing their inner cringe.

A typical TikTok video using the sound generally shows the user’s face with text layered on top that describes something the user does that could be deemed as “cringe.” The twist is that they are admittedly guilty of doing the cringey thing— and lowkey proud of it. Amassing 1.8M views, a late-June TikTok from @carlyrivlin used “people who mid-sentence randomly start speaking in a British accent” as her admitted cringe behavior. Same.

Another user, @notmikaylacampinos, garnered 465.7K views on her video about Instagram and Snapchat users posting on their stories for that one specific person to see. A couple of the 3,586 comments read, “Imagine not being guilty,” and “I mean my crush needs to see my story.”

User @jias.spam exposed us all with her take on the trend by using “when people make up fake scenarios in their head to fall asleep” as her guilty-cringe moment of truth. Oh, and the 357.6K users who liked the video seem to resonate. Raise your hand if you, too, have never had an original thought in your life.

Seriously, this trend gets really niche. User @trevorryanhughes brought up the so-called “embarrassing” aesthetic of Subway sandwiches and the 300K users that liked the video either feel it to their core or strongly disagree and are saving it for a rebuttal. The comments section was full of responses like, “Idc what anyone says subway is so freaking good,” and “Honestly sometimes I crave it but I’m too embarrassed to go. So... slay.”

Like all viral trends, nothing is ever that serious. So brainstorm a thing or two that you are sorry-not-sorry for and hop on the bandwagon before the next Kardashian sound of the year pops up. There’s no doubt it will probably be sooner than you think.

More like this
Behind The Hilarity Of The "POV: You Walk Into My Room" TikTok Trend
By Lexi Inks
Why TikTok Is Obsessed With Caesar Salads Right Now
By Alexis Morillo
TikTok's Butter Board Might Be The New Cheese Plate
By Emma Carey
Confusion Reigns After Kanye Changes His Instagram Profile Pic To Kris Jenner
By Jake Viswanath
Get Even More From Bustle — Sign Up For The Newsletter