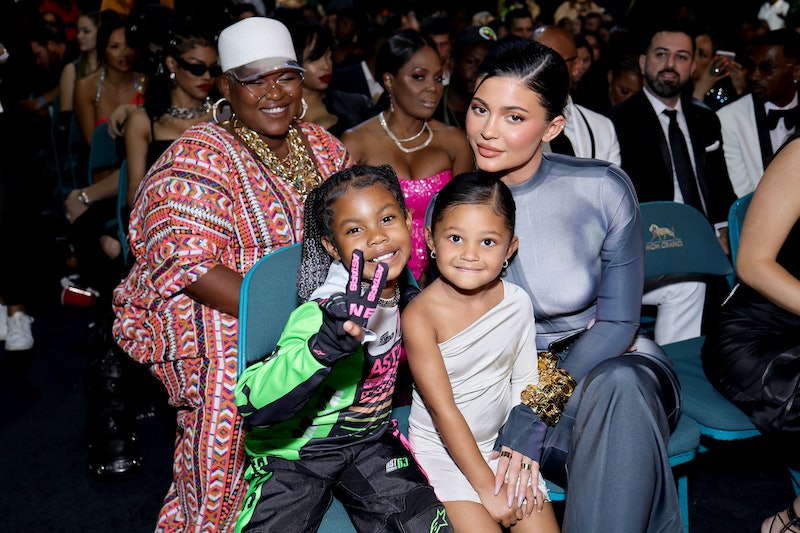 When you reach a certain level of fame, you can make TikToks with viral audios based on your own voice — and then, make them even viral-er. Kylie Jenner is at that level (to no one’s surprise). In a July 6 video, the reality star and beauty mogul took to the platform with her daughter, Stormi Webster, to react to an audio spoof of the mother and daughter with the now-iconic line, “Stormi, you look like mommy, baby.”

The sound comes via a September video from TikTok user @stormiibabii, a parody of Stormi’s Halloween costume copying her mom’s 2019 Met Gala look. Since then, the sound has been used in more than 145,000 videos — many of which you probably saw scrolling through your FYP in late 2021. The trend generally followers users calling out personality traits they see in their children (or will see, in their future children); think, “when I see my daughter sobbing & chopping her long hair off after getting her heart broken,” or “when my daughter gets home after a late night and scarfs down $60 of Taco Bell.” Some users got creative with their interpretation of the sound — like @jacobemile’s message to his houseplant: “When your plant looks good but is dead inside.”

Naturally, Jenner and Stormi cracked up in their reaction to the viral sound.

The original creator responded to Jenner’s viral reaction (which amassed nearly 8 million likes in its first 24 hours). “I AM DYING ILY KYLIE,” she wrote.

This isn’t the first time Jenner has used her own trending TikTok sound for a meta moment. In May, she even used one such audio to deliver an earnest update about her postpartum experience following the birth of her yet-to-be-renamed son (known, for a moment, as Wolf Webster). “Dude, I’m getting my personality back, though,” Jenner lip-synced in the video, quoting her viral Life of Kylie soundbyte. “Like, I’m feeling like myself again. I really was not myself.”

“When your postpartum hormones start to level out 😅😅😃,” she wrote in the caption.

And who could forget Jenner’s “Rise and Shine” moment? The clip of her waking up Stormi in a Kylie Cosmetics HQ Tour became so popular that Jenner’s fellow celebrities reacted to the morning song; some, like Lizzo, even performed their own renditions. So it’s safe to say that Jenner and Stormi are a powerful mother-daughter force on social media — but it’s anyone’s guess which sweet moment between the pair will go viral next.

More like this
Khloé Kardashian Writes Touching Instagram Tribute To Tristan Thompson’s Mother
By Alyssa Lapid
'RHOSLC’s Heather & Whitney Are Still On A “Friendship Break” After Season 3 Reunion
By Jake Viswanath
RHOP’s Robyn Dixon Explained Why Juan Paid For Another Woman's Hotel Room
By Brad Witter
Everything To Know About 'The Real Housewives Ultimate Girls Trip' Season 4
By Jake Viswanath
Get Even More From Bustle — Sign Up For The Newsletter
From hair trends to relationship advice, our daily newsletter has everything you need to sound like a person who’s on TikTok, even if you aren’t.