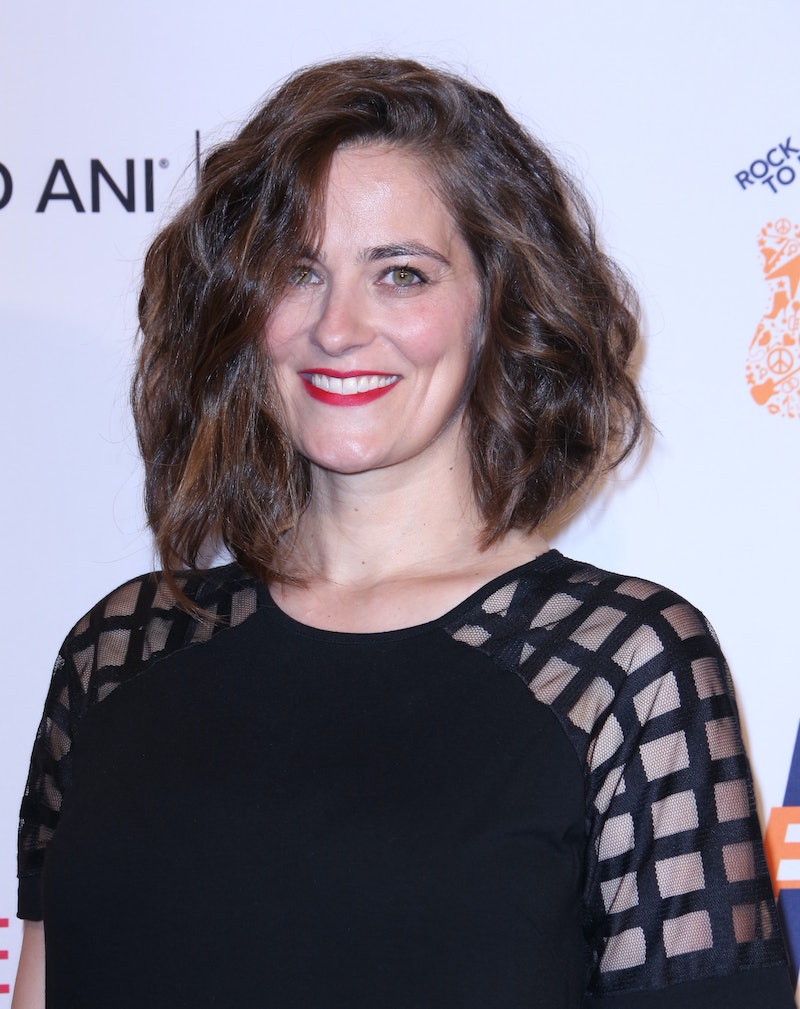 I learned that actor and writer Clementine Ford was living with multiple sclerosis when I met her at a writing retreat in 2014. I had just finished marathoning The L Word (the reboot is happening!) for the eleventy-millionth time, and I recognized Ford immediately as Molly Kroll, Shane's Ivy League crush turned girlfriend — and one of my favorite characters — in season five. With her hair piled loosely on top of her head, her face free of makeup and her infant son Eli resting on her hip, Ford radiated the kind of personal warmth that makes others feel at ease.

We were standing in the kitchen getting snacks during a break when she mentioned in conversation that she had MS. "My mom has MS," I blurted out before even offering my name, excited to have someone to discuss it with. Though she'd been living with MS for several years at that point, she had only disclosed her diagnosis to people on a case-by-case basis.

Ford, who went public with her diagnosis on Instagram in September 2018, has relapsing remitting MS, which is characterized by inflammatory attacks on the central nervous system, according to the National Multiple Sclerosis Society. Overall, MS affects almost 1 million people in the U.S., with the disease afflicting women as much as four times more often than it does men. March is MS Awareness Month, and you can show your support by educating yourself about what it's like to live with this chronic, and often invisible, illness.

Imagine suddenly experiencing vision problems, depression, trouble walking, debilitating vertigo, extreme exhaustion, and unexplained body pain, numbness, and weakness. Like many women who live with MS, Ford experienced all of these MS symptoms off and on for 10 years before she received a diagnosis. "It started when I was 19 or 20. I would lose sight in one of my eyes when I was jogging outside when it was hot," Ford tells Bustle.

People with MS can have severe reactions to heat, but since the vision loss was sporadic, and only happened when she exercised outside, Ford chalked it up to being heat related and started working out indoors. Several years later, she says she lost feeling in the front of her body, but dismissed it as a side effect of a rash she picked up while traveling in Belize. A few years after that a series of symptoms, including vision loss, eye pain, and a loss of sensation in her feet, began to persist. She saw her doctor for what she thought was a pinched nerve in her foot.

"My general practitioner, who I’ve known forever and who has seen me through so much hypochondria, when he was worried and he was like, 'maybe this is a real thing,' then I knew it was serious," says Ford. She was referred to a neurologist, and after her MRI scans revealed multiple brain and spinal lesions, she was diagnosed with relapsing remitting MS, the most common form of the disease. People who have this type of MS can live symptom free for periods of time before experiencing a resurgence of symptoms, often referred to as flare ups.

Deciding Whether Or Not To Disclose At Work

At the time of her diagnosis, Ford was portraying Mackenzie Browning on the CBS daytime soap opera The Young and the Restless. "I had a really hard time with my feet," she says. "Being on a soap opera especially, because it was all about heels all the time and it was really hard for me to walk in heels. Also with my eyes, they always wanted me to have false eyelashes, and it was so painful — even just the softest brush touching my eye."

While Ford told the hair and makeup crew about her diagnosis, she says she was afraid she'd lose her job and "never work again" if anyone else found out. According to the NMSS, Ford's fears are common, and not unfounded. There are multiple resources on the NMSS website for how and why, or why not, to disclose an MS diagnosis at work.

"Some people have misconceptions about MS and prejudices. Despite your best efforts, they may react negatively toward you, incorrectly viewing you as someone less competent or less able to handle stress," NMSS explained on its website. "You could be held back from promotions following disclosure but find it difficult to prove this was due to your MS."

Now add the cutthroat nature of Hollywood, and you can see how being labeled as having a chronic medical condition when you're barely 30 can create disclosure anxiety. Ford says this was compounded by the fact that, at the time, she did not have health insurance, and out-of-pocket expenses for MS medications can be astronomical.

Because of this, Ford didn't seek help from support groups and didn't feel comfortable asking questions online. However, eventually her need to connect with others who have MS eclipsed her fear of speaking up. "I wanted access to that sort of group healing and being able to talk to people," Ford explains.

Disclosing MS In A Relationship

While her girlfriend at the time was there for her as she was being diagnosed, she had to make the decision to disclose in her next relationship. When Ford began dating her now-husband, actor and producer Cyrus Wilcox, she told him up front that she lives with MS. By then, she had realized that not prioritizing her health was not an option.

"He's beyond anything I could have ever imagined in terms of support, and listening to me, and filling in the gaps when I can't do all of the things I need to do," Ford says. "I listen to other people and I see posts on these [MS message] boards, and I realize that I really am in an exceptional situation."

Since having her son, 4-year-old Eli, and daughter, 2-year-old Welles, Ford has committed to only taking on acting projects she's passionate about and that allow her to make Eli, Welles, and her health her top priorities. What's more, because she was raised by a nanny, Ford wants to give her children the opposite experience. If she's working on a project, sometimes the kids come too.

While she aspires to be supermom, Ford has had to learn to set boundaries and refrain from over-scheduling herself, which means her mother-in-law and a close friend pitch in.

"There's a lot of things I just don't do. I can't go to an all-day afternoon birthday party in the sun and then go to dinner. I have to choose," she says. "It's hard to explain to someone who's never experienced it. I know what new-parent exhaustion feels like, and MS fatigue is 1,000 times different." She compares it to being held down by a weight to the point of being unable to function.

It's not lost on Ford that the things that are most important for people living with MS to stay well, like avoiding stress, getting enough sleep, staying active, and not getting overheated, are the same things that help everyone stay well.

"We don't value those things in this country," she says. "Stress is really bad, sugar creates an inflammatory response (but I still eat it) ... it's all basic health stuff. Having MS just really gives you permission to be doing all the things everybody should be doing anyway. It's just that much more important to meditate and find ways to reduce stress."

Though MS sometimes knocks her down, Ford wants people to know that even though she has a chronic illness, she still has things to offer. She wants to write her story, and she says she wants to focus her creative work around women and the LGBTQ+ community. While she says she hasn't been tapped for The L Word reboot as of yet, Ford says she is 100 percent willing to reprise her role as Molly Kroll. (Yes, please!)

And, like Selma Blair, who also is raising awareness about life with MS, by sharing her journey Ford hopes to take some of the burden off of herself, educate people about the disease, and offer support to others living with MS. "I'm going to give you some of this weight off of me and [you] can make a choice about whether to engage with it."