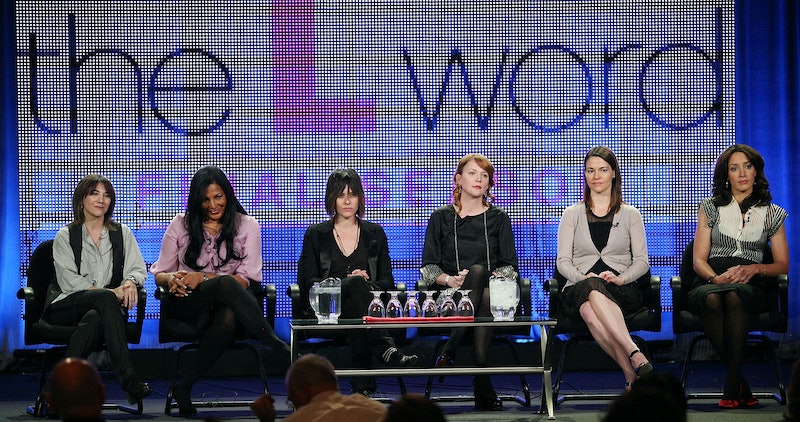 Get your DVRs ready because an eight-episode sequel to The L Word is officially coming to Showtime as soon as year's end, the network announced at the Television Critics Association's winter press tour on Thursday, Jan. 31, per The Hollywood Reporter. In addition to exec producing the new L Word installment, Jennifer Beals, Katherine Moennig, and Leisha Hailey — all stars of the groundbreaking original Showtime series, which ran from 2004 to 2009 — will all reprise their roles, "while also introducing a new ensemble of self-possessed LGBTQIA characters experiencing love, heartbreak, sex, setbacks and success on the east side of L.A.," also according THR.

So just who will be among that new generation of women in the cast? While nothing has been confirmed, Emmy-winning writer and actor Lena Waithe has already publicly thrown her hat in the ring to participate. "The folks at @Showtime got my number 😜" she tweeted after the news broke.

Indeed, the visionary with TV shows like Master of None and Dear White People to her credit should actually be on Showtime's speed dial, given the success of Waithe and Common's drama The Chi, which will return for Season 2 on April 7, per TVLine. In fact, Showtime renewed The Chi for a second season after airing just four episodes of its debut run.

Also very likely joining The L Word's revival: Sarah Shahi, who played Moennig's onscreen love interest Carmen for two seasons during the original run. "It was discussed [that] my involvement [would be] very heavily [that] I would be in it," Shahi told THR at another TCA winter press event the same day as the announcement. "I intend to keep it that way and so does Showtime." (The network declined THR's request for comment on the casting, however.)

After all, playing the role of Carmen was a labor of love for the actor, who elaborated to THR: "[The L Word] was my first big gig and to be a part of that, I don't think I ever really knew what I was stepping into until after and I started speaking with women and getting letters. Just the amount of information that was sent my way about how impactful it was, it put me on this thing where it's like, everything I want to do from now on, I want it to have meaning and I want it to touch people ... To be a part of that sisterhood was so momentous for me. I'm more than honored that I can go back and re-create it."

The L Word's creator Ilene Chaiken will also co-executive produce the sequel series alongside Marja-Lewis Ryan, who will also serve as the showrunner.

“Marja has brought her unique and contemporary vision to The L Word and blended it beautifully into the fabric of Ilene’s groundbreaking series,” Showtime Networks President of Entertainment Gary Levine said, per Deadline. “This revered show was both entertaining and impactful when it originally ran on Showtime, and we are confident that our new version will do that and more in 2019.”

For her part, Beals, who played Bette Porter, couldn't contain her excitement, teasing the news as far back as July 2017.

"I’m not officially allowed to talk about it, but Showtime is very committed to bringing it back," the actor said in an interview with Entertainment Tonight at the time. "There’s not an if, and, or but — they’re very committed to bringing it back. It’s monumental; it’s epic in the truest sense of the word. I’m so happy. There’s so many great things going on, truly my cup runneth over."

Those who advocate for greater LGBTQA+ visibility and representation in TV share those emotions over the news of Showtime's L Word sequel. And, honestly, who'd be better than Waithe to bring the series to a new generation? The ball's in your court, Showtime.