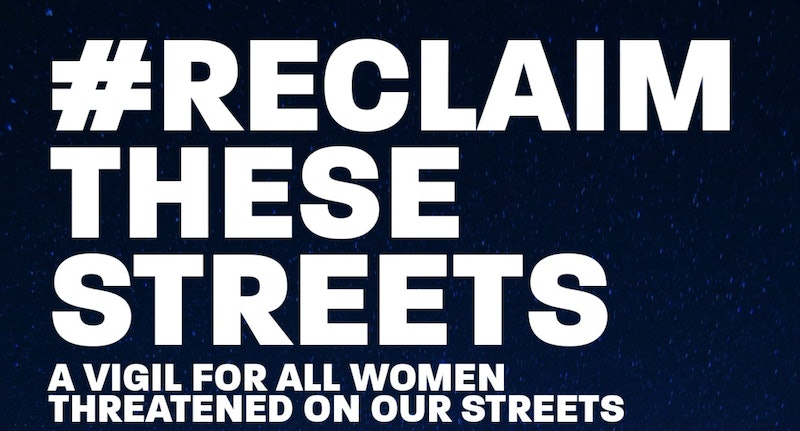 “Enough is enough,” said Isabel Burke on Good Morning Britain this week. Burke is one of the organisers of Reclaim These Streets, a vigil scheduled to run this weekend, following the shock disappearance of Sarah Everard. On Wednesday 3 March, Everard vanished after walking home from a friend's flat in South London. A body discovered in Kent woodland was confirmed to be Everard’s on March 12 and a metropolitan police officer has been arrested on suspicion of her kidnap and murder.

For Reclaim These Streets, Sarah’s death is the final straw, and they are encouraging people to gather online or in person to support women’s right to safety on the streets. A vigil is organised to take place on Saturday, 13 March, however, police forces across England and Wales will not be permitted to waive coronavirus restrictions banning gatherings for the vigils, according to The Guardian. As a result, organisers and potentially those attending face the threat of a fine. Those who attend the in-person vigils do so at their own risk. If you’re worried about your safety or potentially receiving a fine, a nationwide online vigil is taking place.

Here’s what you need to know about the Reclaim These Streets events taking place this weekend.

Reclaim These Streets are planning to “hold a short gathering” on Clapham Common at 6 p.m., on Sunday, March 13, close to where Sarah Everard disappeared. Announced via Facebook, the vigil will include a minute of silence to remember Sarah Everard and all women lost to violence, and aim to channel the “collective grief and sadness in our community.”

“We believe that streets should be safe for women, regardless of what you wear, where you live or what time of day or night it is,” they state.

The event has sparked supporting events (both virtual and IRL) throughout the UK including Manchester, Birmingham, Bristol and more. However, RTS organisers say Metropolitan police have claimed the event is unlawful due to current coronavirus restrictions, and warn they “could face tens of thousands of pounds in fixed penalty notices” and “criminal prosecution under the Serious Crimes Act,” if the event goes ahead.

On Friday, March 13 it was reported by The Guardian that police forces across England and Wales had been told they would not be able to waive coronavirus restrictions banning gatherings to allow Reclaim These Streets gatherings to go ahead.

Reclaim The Streets say they were “always aware of the challenges” of organising a Covid-secure vigil. “When we initially proposed the event, we proactively reached out to Lambeth Council and the Metropolitan Police to ensure that the event could safely and legally take place,” they said in a statement. However, Metropolitan Police “reversed their position” and stated that their “hands are tied” by the Covid-19 regulations.

The group has since seen public support from MPS who are supporting Reclaim These Streets decision to go ahead. Per BBC News, Conservative Caroline Nokes has asked Home Secretary Priti Patel to step in.

With the support of human rights lawyers, Reclaim These Streets are appealing to the High Court to confirm “that the Metropolitan Police’s understanding of the law is wrong.”

They have launched a crowdfunder to help raise funds for potential legal costs if the vigil goes ahead. They have since surpassed their target of £30,000 needed to cover legal costs, but you can still support.

If the group wins its legal challenge it said it would donate the money to a women's charity.

Other online and in-person events

Reclaim These Streets say should the judge decide in their favour, the Clapham vigil should be allowed to go ahead.

There is also a number of supporting protests — both virtual and IRL — scheduled to take place throughout the UK on Saturday, March 13, with various organisers setting up Facebook pages with details. For those planning to attend a vigil in their area, the original event page says the vigil will “observe strict Covid-19 safety guidelines, including compulsory mask-wearing and social distancing.” “We would also encourage anyone who comes along to download the NHS contact tracing app and turn their Bluetooth on,” they said.