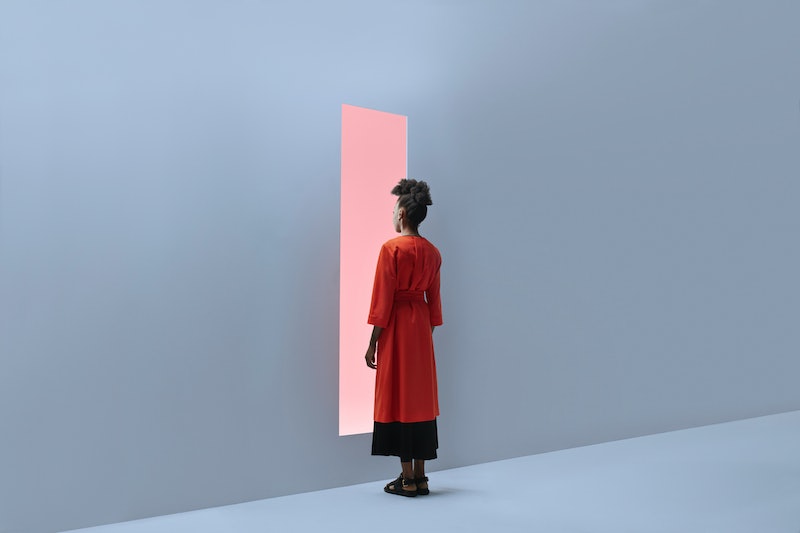 I still get goosebumps when I think about it. The moment Star Wars actor John Boyega addressed the Black Lives Matter crowd in Hyde Park with a speech that reverberated across the country. Boyega passionately spoke of the need to take care of Black women, too — a sentiment that often gets lost in conversations about racism and discrimination. "We need to take care of our Black women,” Boyega bellowed to the thousands gathered. It's a line that brought many of us to tears; and begs the question, why isn't there more mental health support for Black women in the UK?

It's a hard statistic to read. Mainly because it contradicts the well-versed narrative that Black women are stronger than most.

You'll most likely have heard the "strong, independent, Black women" trope before. It has been ingrained into our collective psyche — from comedy sketches, to music and literature, to the treatment of Black women in health services. It should go without saying that like all sentient humans, Black women can be vulnerable, soft, fragile, strong, and revolutionary, all at the same time.

Singer-songwriter Misha B perfectly detailed this in her recent IGTV Live that has been widely documented. The 28-year-old spoke candidly about her experience with racism during her time on X Factor in 2011. Misha B was a frontrunner, set to win the talent show until she was accused of bullying other contestants by judges Tulisa Contostavlos and Louis Walsh. Live on the show, Misha B was described as "over-confident" and "feisty", labels often given to Black women in mainstream media.

After the very public backlash when the show aired, Misha B revealed she suffered with suicidal thoughts and sought therapy for post-traumatic stress. It's reassuring to hear she received help from a licensed professional, and continues to do so years later.

As mental health on the whole becomes far more openly discussed, this has further highlighted the fact that Black people are underrepresented in mental health services – from the therapists to the clients. And it's a fact Black Minds Matter UK are actively doing something about. The charity's mission is to support making mental health more relevant and accessible for all Black people in the UK.

“Black people are less likely to seek help for mental health until they reach the point of psychosis or schizophrenia," shares Agnes, co-founder of Black Minds Matter UK. "That’s why we’re more likely to be diagnosed with these mental illnesses."

Agnes Mwakatuma launched the Black Minds Matter UK fundraiser during the height of Black Lives Matter protests to help fund 12 weeks worth of therapy for Black people in need. They hit their £50K target within one day.

With the help of Beauty Stack CEO Sharmadein Reid, they’re now creating a reliable booking system that will allow people to find an accredited Black therapist they like and book an initial assessment online.

“It’s really important to have a therapist who understands your experience and the effects of white privilege. Somebody who empathises with your cultural and religious beliefs,” Mwakatuma explained.

Cultural influences could play a part in this underrepresentation, too. In my experience of the Caribbean community, therapy is not something we talk about. We might pray about it, but we definitely don't tell strangers about our private business. During my own battles with mental health, I was lucky enough to be lifted up by my mother and family, who were open to talk me through depression – but that's not necessarily the norm.

I'm reminded of a line from Candice Carty-Williams' bestselling novel Queenie, where Queenie's granddad tells her: “Maybe if all ah we had learned to talk about our troubles, we wouldn’t carry so much on our shoulders all the way to the grave.”

With this in mind, there's clearly a need for therapists who understand the complexed, varied and nuanced experiences of the Black community – especially Black women, who can find themselves experiencing the intersection where sexism and racism collide.

“There's much more Black therapists than assumed. We spoke to the Black, African Asian Therapy Network and they told me that are 600 Black therapists on their network but a lot of people don't know that,” shared Mwakatuma. "I'm so excited for people to be aware that they have choice."

While it's encouraging to see that discussions about Black women and therapy have now reached pop culture – from the young millennial characters in Issa Rae's HBO series Insecure, to podcasts like The Read and Therapy for Black Girls – there's still a way to go. Therapy is still expensive for many and cultural stigmas are a particularly difficult hurdle.

As Black Minds Matter say, "we need to break that stigma in our community — those cultural and religious barriers that stop is reaching out for help. Therapy isn't just for when we're at breaking point. Seeking therapy is also about identifying behaviour patterns that could later impact your life in a negative way. This is time for us to really destroy that cycle."

More like this
Jess & Anya Are The High School Sweethearts Who Gave Love A Second Chance
By Jessica Morgan
The UK Abortion Laws In 2022, Explained
By Sophie McEvoy
Aesop's Queer Library Is Open
By Tomi Otekunrin
5 Ways To Stand In Solidarity With Women In America From The UK
By Sophie McEvoy
Get The Very Best Of Bustle/UK