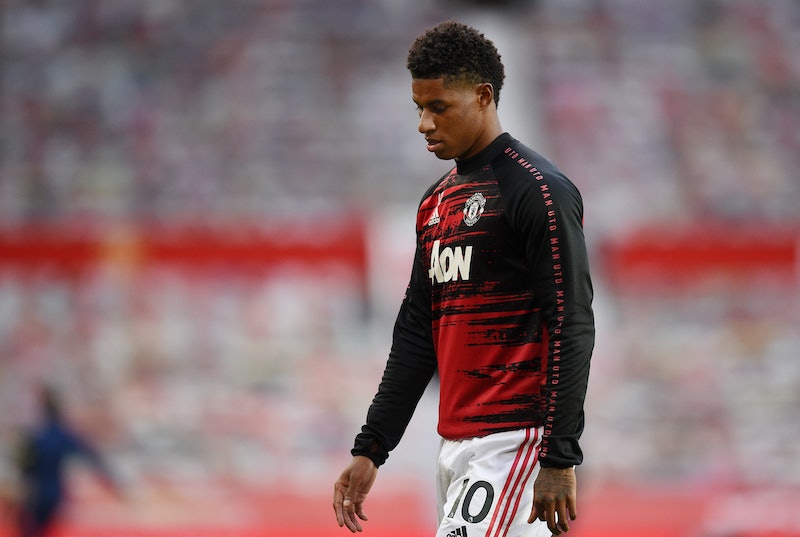 It's been a big year for Marcus Rashford: he forced a government U-turn in June with his campaign to ensure the provision of free school meals for children during the summer holidays, #RashfordforPM was subsequently trending on Twitter, and last week, he was awarded an MBE by the Queen. But, it seems the government have no plans to support Rashford’s latest proposals.

On Thursday Oct. 15, the Manchester United and England footballer launched a petition to expand the free school meal scheme, calling for the government to commit to supporting vulnerable children as part of the #EndChildFoodPoverty campaign.

However, a government spokesperson has now confirmed they will not be extending the scheme, per the BBC: “We took that decision to extend free school meals during the pandemic, when schools were partially closed during lockdown. We are in a different position now with schools back open to all pupils.”

“It’s not for schools to regularly provide food to pupils during the school holidays,” said the Downing Street spokesman. “We believe the best way to support families outside of term time is through Universal Credit rather than government subsidising meals.”

Rashford, 22, who received free school meals as a youngster growing up in Manchester, has vowed to continue his fight despite the government rejection. “It's not for food banks to feed millions of British children, but here we are. 250% increase in food poverty and rising,” the footballer wrote on Twitter. “This is not going away anytime soon and neither am I.”

The campaign is supported by the Child Food Poverty Task Force, formed by Rashford in July, as well as a further 20 charities and key names in the food industry. The online petition already has hundreds of thousands of signatures – over 210,000 as of Friday Oct. 16, lunchtime – surpassing the 100,000 signature threshold to be considered for parliamentary debate in just 10 hours.

When asked if the government would be reviewing the proposal in light of the petition, Foreign Secretary Dominic Raab told Sky News: “Parliament will decide what it discusses.” He went on to say that Rashford seems like “a really smart young man” and understands he is “talking from the heart”, but insisted the right measures were already in place as a result of Rashford's campaign in the summer.

“I think we are in a different situation than we were previously, when he made what was a very valuable intervention, because schools are open,” Raab told Sky News. “We’ve put more money in, emergency money for local authorities precisely to deal with these sorts of scenarios.”

“All I’d say is that precisely because we listened to him first time round, we’ve put a really targeted package of measures in place and support in place for precisely the children and families that he's speaking up for."

The campaign has already received support from a number of MPs and celebrities, including former PM Gordon Brown, who called on Boris Johnson to look at the proposal personally, “instead of sending out a standard reply”. Senior Tory MP Robert Halfon, chairman of the Education Select Committee, said on Twitter that the government response was “very disappointing”, while actress Emma Thompson, who is an ambassador for the Children's Right2Food Campaign, commented: “There is absolutely no need for any child to go hungry in the UK. The fact that they are and in increasing numbers suggests cracks in a broken food system that can and must be repaired as a matter of the utmost urgency.”

Those looking to sign Rashford's petition to expand the free school meal scheme can do so here.

More like this
Gen Z Are Twice As Likely To Identify As Queer, According To New Data
By Sam Ramsden
Rita Ora Finally Opened Up About Marrying Taika Waititi & Their "Perfect" Wedding
By Sophie McEvoy and Catharina Cheung
Pret & Costa’s Coffee Is The Strongest On The High Street, According To Which?
By Sam Ramsden
Twitter Has *A Lot* To Say About The "Single Penalty”
By Sam Ramsden
Get The Very Best Of Bustle/UK
Sign up for Bustle UK's twice-weekly newsletter, featuring the latest must-watch TV, moving personal stories, and expert advice on the hottest viral buys.