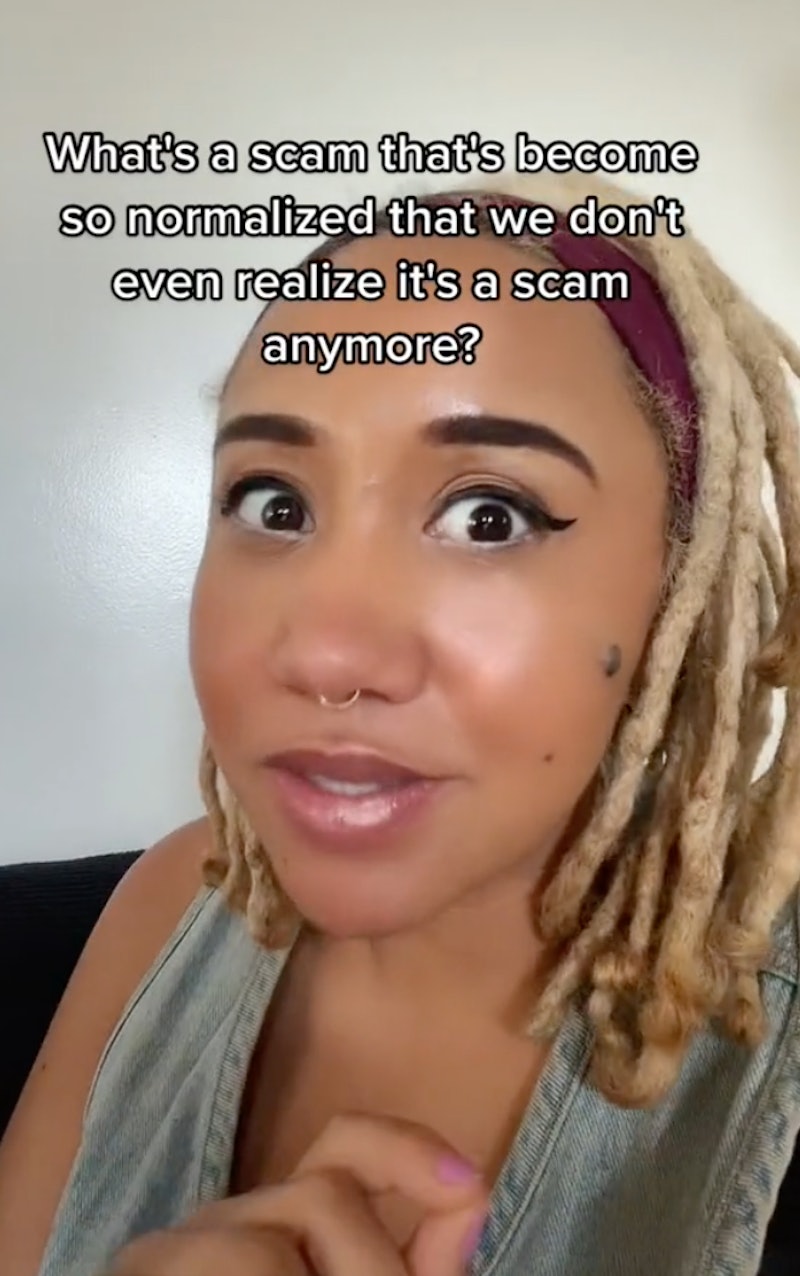 Thanks in part to The Tinder Swindler and Inventing Anna, scam culture is pop culture online in 2022 — including the rip-offs we experience day to day. Understandably, complaining about getting cheated never goes out of style, especially on TikTok. #Scam has 5.8 billion views on the app, encompassing everything from users sharing the cons they’ve fallen victim to, exposing companies with shady business practices, or sharing general tips on how to avoid getting ripped off. Now, a new trend that discusses scams and their prevalence in our daily lives is taking over the app.

TikTok user @debtcollective asked the platform a question on June 14 that has since gone viral: “What’s a scam that’s become so normalized that we don’t even realize it’s a scam anymore?” The answer? Seemingly, everything. Following her post, users are responding in stitch-style videos to share their answers in detail — and turns out basically everything can be considered a scam if you really think about it.

With over 15,600 comments on the original video — which calls out student loan debt — it’s clear that people have some thoughts. Users under the video were quick to share their ideas of normalized swindles, from “the fact that hot dogs come in packages of 10 but buns come in packages of 8” to “‘service fee’ paying online.”

One user, @couponing_coffee_target, garnered over 10.9 million views and 1.9 million likes for talking about the misconception that using “fabric softeners, scent beads, dryer sheets, and way too much detergent” are needed for laundry. She goes on to share why these products actually damage washers and dryers, and users in the comments spoke anecdotally to the truth of her claims: “Married to an appliance repair guy. He made me get rid of dryer sheets as soon as he moved in. Can start dryer fires too” and “My grandmother is super frugal and taught me the same thing. I used to think it wouldn’t clean my clothes until I tried it!”

Another user, @jordan_the_stallion8, draws on his experience working in the fast-food industry to explain that there is no such thing as a medium-sized drink. “Medium isn’t real,” he said, “A medium-sized drink is just a small drink in a taller cup.” Users were quick to express their agreement and disbelief in the comments, with messages like “ok hm my bubble has been burst.”

Other users used the trend to comedically call out (unintentional) self-imposed cons. User @manrikakhaira on TikTok recognized the rip-off of paying to see with glasses or contacts, in a video with over 179,000 views. “It’s not my fault I can’t see!” she exclaims, “that is a scam in itself.”

@ben_g_ben_jammin added to the trend with a wordless stitch. In it, he uses a bag of Lay’s Kettle Cooked BBQ chips to call out the age-old scam of the bag being filled mostly with air. Commenters shared laughing emojis and playful anger in the comments: “for real we pay like what 2-4 bucks for half a bag filled with air.”

The virtual conversation that’s taken place between thousands of users has served as an eye-opener to some about how many cons we partake in daily. With this trend, creators have stopped at nothing to identify the good, the bad, and the scammy in every facet of life. Many of the videos are made in good fun or to share knowledge with others, but after a few weeks of these stitches, user @zacharypiona is ready to put the trend to bed. In a half-comedic, half-serious video stitch that has gone viral itself with over 1.2 million views, he asks, “If we could just stop, sweep these under the rug again, I liked that. That was a good time.”

Under this video, there’s one comment in particular that truly sums up the vibes of living in a scammy world: “Literalllllly…. Aren’t we going thru enough.” Perhaps in some cases, ignorance really is bliss.

More like this
Here’s How To Get Verified On TikTok
By Emma Carey
RushTok 2022 Is Here & TikTok Is Just As Obsessed As Last Year
By Sarah Ellis
What Does POV Mean On TikTok? The Popular Acronym, Explained
By Emma Carey
TikTok’s #NapkinChallenge Is The Chaotic Good You’ve Been Missing
By Sophia Moore
Get Even More From Bustle — Sign Up For The Newsletter