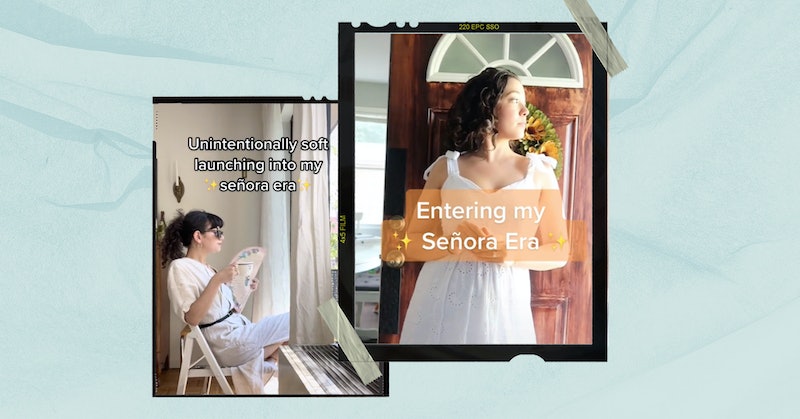 It can be a regular day when the señora life calls you. For some, the transition is gradual — with symptoms including a small obsession with #CleanTok or having Spotify routinely recommend you a Latin Classics playlist (specifically one featuring José José and Juan Gabriel, like this Twitter user). Then all of the sudden, you’re only wearing the same pair of chanclas, or house sandals, nurturing a thriving herb garden and indoor plants, and using your free time to meticulously deep clean your apartment. Not to mention the cafecito you make every afternoon while staring wistfully into your yard. I mean, we’re all destined to become our mothers and abuelitas eventually, right?

Abuelitas have an endearing aesthetic, and this isn’t the first time they’ve gone viral on TikTok (hi, coastal grandmothers!). For the Latinx Grandmother Lifestyle™, Latinx users on TikTok have started the hashtags #SeñoraEra and #SeñoraTok to showcase the moments they’ve found themselves behaving in ways their mothers or grandmothers commonly do, with fewer social activities and a lot more things happening at home (the afternoon tea stays spilling, in both ways). In Spanish, the words “señorita” and “señora” are used to describe women, with “señorita” translating to a young, unmarried woman, and “señora” as a respectful title for an older woman, translating closely to “Lady” or a “madam.” On TikTok, anyone can launch into their señora era, regardless of gender or culture. Señora is a state of mind — a lifestyle.

The hashtags #SeñoraEra and #SeñoraTok have collected 603.9K and 530.8K views, respectively, and many of the videos under these tags are paired with the song “Sabor a Mí,” a 1959 Mexican bolero by Edyie Gorme and Los Panchos. The trend has inspired an entire Reddit thread along with some “Señora Life” merch, and Latinx users on Twitter are also chronicling their emergence into their señora era.

How Did The #SeñoraEra Trend Start On TikTok?

The Señora trend — originally exclusive to Spanish-speaking TikTok — started in March of 2022, when TikTok user @adribecc posted a video with her own sound, comically breaking down her señora-era symptoms. The sound went viral on Latinx TikTok, and more than 14K users added their own iterations to what would later become the #SeñoraEra trend.

The video stars @adribecc in a therapist’s office, and the therapist is asking her about her first señora symptoms. Adri responds she was elated to see her clean kitchen. Then, she changed the soil on one of her plants. “I’m turning into a señora!” she says, horrified. “I can’t do anything for you,” the therapist replies. The video ends with an omnipresent señora voice, whispering to Adri to put a jacket on because it’s chilly in the house.

What Is The #SeñoraEra Trend On TikTok?

Señoras — in this case, Latinx moms and abuelas — are characterized by a very specific set of behaviors and traits. Top among them is their home decor — colorful walls, fruit-themed wallpaper of some sort (my mother’s kitchen decor theme is literally grapes and apples), and lace touches on their furniture, to name a few. They typically vacuum at ungodly hours (and wake their whole family up in the process), watch old reruns of Telenovelas, sip cafecito, iron clothes even if they’re not wrinkled, and an assortment of other random, humorous quirks and routines, depending on their cultural background and personality.

The trend reached virality on English-speaking TikTok with user @pourintosoul, who introduced her señora era on by serving herself some afternoon cafecito, sitting in a backyard chair staring at nothing and feeling at peace, enjoying gardening, and keeping a watchful eye on what’s going on outside her house. “its a lifestyle,” she captioned her video, which amassed 288.9K likes.

TikTok user @paola.marie, a self-proclaimed “grandma style enthusiast,” soft launched her señora era sitting by her window with a decorative folding fan, featuring her plant, old school salsa, and un cafecito. Her video is among the most popular in the trend, with 116.5K likes.

“I love how every culture has its own señora, a TikTok user commented. “There’s something about staring outside with a cup of coffee that draws us all together in the end.”

User @aranivah5 also hopped on to share her señora symptoms, which include having a favorite cooking spoon, cooking in a certain stance (arm placed at the hip), collecting useless ceramics, and clapping offbeat when listening to music.

“I think I might’ve been born a señora” another user commented.

Other users like @yazminsglam had a unique take on the trend, tailoring it to beauty quirks like having a favorite makeup brush, noticing new wrinkles while doing your makeup and wondering when they developed, refusing to throw away old, broken makeup because “it still works,” and having a ton of eyeshadow palettes but using the same one.

The señora era chooses all of us at some point, it seems. So when you find yourself taking home the restaurant napkins, denying yourself store bought treats because “you have food at home,” and using fast food containers for your leftovers, just embrace the lifestyle — and of course, the simple pleasure of an afternoon cafecito.