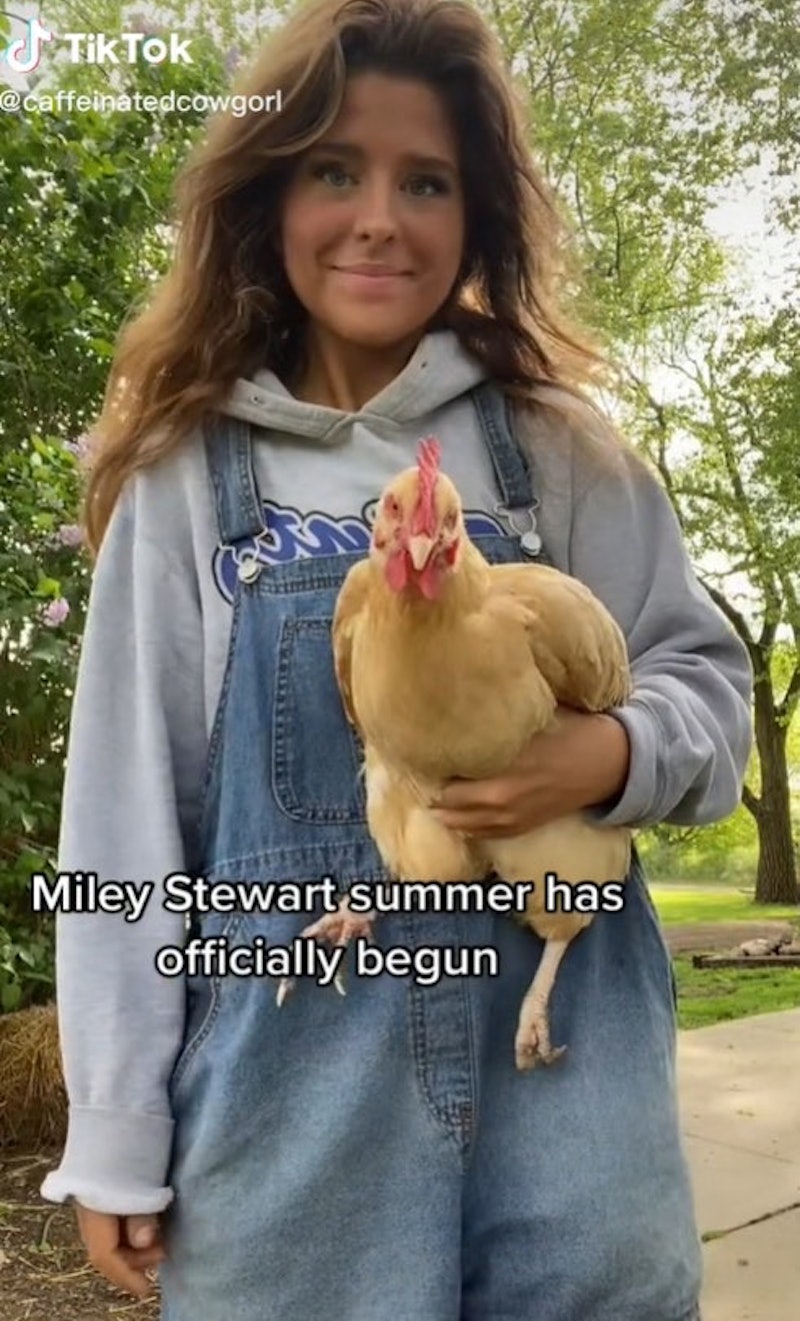 TikTok/@caffeinatedcowgirl
By Courtney Young
May 18, 2022

If we’ve learned anything about TikTok in the last few years, it’s that personal branding is a core pillar of discourse on the app. Users sort themselves into archetypes based on the stores they shop at, the drinks they order, and even the time of day they wake up. That same level of branding is applied to users’ summer plans, from the original “hot girl summer” to “shot girl summer,” to the newly inducted, “Miley Stewart summer.”

Inspired by a beloved (and now painfully vintage) character who abandons her glitz and glam lifestyle to find a more grounded version of herself, “Miley Stewart summer” is about trading the rooftop frozé vibe for a childhood bedroom and swing sets vibe. It’s about stripping it all down, finding yourself in nature, and putting your Dyson Air Wrap on the shelf for a little while. City folks, this trend is not for you, though a weekend away never hurt anyone. Entry requirements include a backyard with miles of green grass, friendly neighbors, long winding roads, a country crush, and ideally, a horse or two.

On TikTok, the tag #mileystewartsummer has more than 2.5 million views, but without a contextual knowledge of Disney Channel culture, this rising trend might leave you mighty confused. So let’s talk about it, who is Miley Stewart, and how does she summer?

Who Is Miley Stewart?

Miley Stewart was the voice of a generation and Miley Cyrus’ ticket to fame. The main character in the Disney hit series, Hannah Montana, Miley Stewart was a southern, small town girl with a pop star alter ego named Hannah Montana. With flashier clothes and a blonde wig, no one knew that Miley was Hannah, and vice versa. The show ran for six years from 2006 to 2011, following Miley through her teendom, and in 2009, Hannah Montana: The Movie hit theaters.

The plot of Hannah Montana: The Movie is as follows. When the Hannah fame starts to take over Miley Stewart’s life, her dad, Robby Ray (played by her real father, Billy Ray), suggests she take a trip home to Crowley Corners, Tennessee to bring herself back down to earth. Miley begrudgingly agrees, and while in Tennessee, she reconnects with her grandmother, sings the iconic “Hoedown Throwdown,” falls in love with a country boy named Travis, and rides a horse.

The movie goes on to present potentially the most egregiously unrealistic plot point in Disney history, when the entire town of Crowley Corners learns that Miley Stewart is Hannah Montana, but vows to keep her secret.

What Is A Miley Stewart Summer?

On TikTok, “Miley Stewart summer” is an aesthetic marked by overalls, wild hair, cascading fields of green grass, and a “rub some dirt in it” mentality.

Another user, @danielleaddams, used the trend to share her experience of summer 2021, when after losing her stepfather to cancer and learning her father was losing his battle to Parkinson’s disease, she fled Los Angeles and returned to her Tennessee hometown to heal.

“I have never felt more alive, more magical, more myself in my life,” she wrote in the video.

At its core, the “Miley Stewart summer” trend is less about overalls and an aesthetic, and more about being grounded. Even city slickers, miles away from their nearest barn, can live out their “Miley Stewart summers” by calling their family, spending some time alone, and getting back to reality.