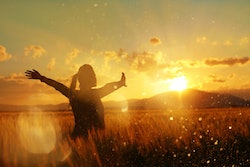 When we think of having an "out-of-body" experience, we might think of near-death encounters or occurrences that are so surreal, they seem to take you out of your current reality. But the mystical practice of astral projection actually allows people to have spiritual, out-of-body experiences intentionally. You've probably heard the term in passing before, and perhaps are even familiar with the idea of meditating to the point of leaving your body — which sounds kind of supernatural. But turns out the meaning of astral projection is a lot more than that.

The concept of astral projection hinges on the belief that in addition to our physical bodies, humans also have an "astral body," which is sometimes referred to as an etheric body, subtle body, or light body. This might also be thought of as your "soul." In many esoteric practices, there is also something called an "astral plane" — and it's through this plane that people can explore during astral projections. The astral plane is considered to be the home of not only souls finding their way to their their next life or final resting place, but also angels and spirits. Accounts of astral traveling are found in cultures from all around the globe and throughout history, and it's also commonly practiced today in modern-day mystic and spiritual practices.

"Astral projection or astral traveling is the ability to allow your light body (or what I call our ‘traveling’ selves), to venture beyond the physical body and project itself to a specific place, and even particular sites in time," ascension guide and quantum shaman Laura Brown tells Bustle. "I have worked with astral projection to witness ancient civilizations and other sacred spaces on the earth, and have also used it to connect with further realms to gain insight for my [spiritual work]." This practice allows our astral body to travel beyond the material world around us using our minds. According to believers, we can then venture into etheric realms that transcend time and space — sort of like having a dream, except you're awake and aware of what's happening.

How Does Astral Projection Work?

Before you write it off for being too supernatural-sounding, consider that some practitioners liken astral projection to simply entering a dreamlike state while conscious — similar to the practice of lucid dreaming while you're asleep. During this conscious and lucid dream-like state, the goal is to transcend your physical being through your mind. Your physical body stays put through the astral projection process, and the adventure takes place entirely in your mind.

Astral projection isn't considered a science, since it involves esoteric matters such as the etheric body and the astral plane. But just as we can enter different states of consciousness through things like dreaming or meditation, it makes sense that some people are able to achieve this through astral projection, too. This theory is explored in a paper published in the Frontiers of Human Neuroscience, in which researchers observed a subject's brain using an MRI while she claimed to be in a state of astral projection. They were able to successfully identify unique parts of the brain that were active during her journey, which helped shine some light on what's happening in one's head during such a spiritual journey. While science may not be able to prove that your soul is out on an adventure, it's clear that there's some interesting brain activity happening that points to an altered state of experience.

How Can I Astral Project?

Astral projection is an advanced technique, although anyone can master it through practice. If you want to give it a try, it's helpful to have some experience with meditation, lucid dreaming, or self-hypnosis, all of which give you more control over your state of consciousness. Start your practice there — begin with a daily meditation practice or do some lucid dream work, then work your way up to using guided astral projection meditations. You'll need to know how to put yourself into a deeply meditative trance to reach a hypnotic state, and then trust yourself to explore the etheric realm. Of course, what works for one person might not work for another.

Keep in mind that it's important to do your research before you attempt astral projection. Make sure you have a clear and pure intention as some believe that astral projection is like the law of attraction for the soul — which means that whatever you reflect will come back to you during your soul journey. Safe travels my soul travelers, and may the astral odds be ever in your favor.