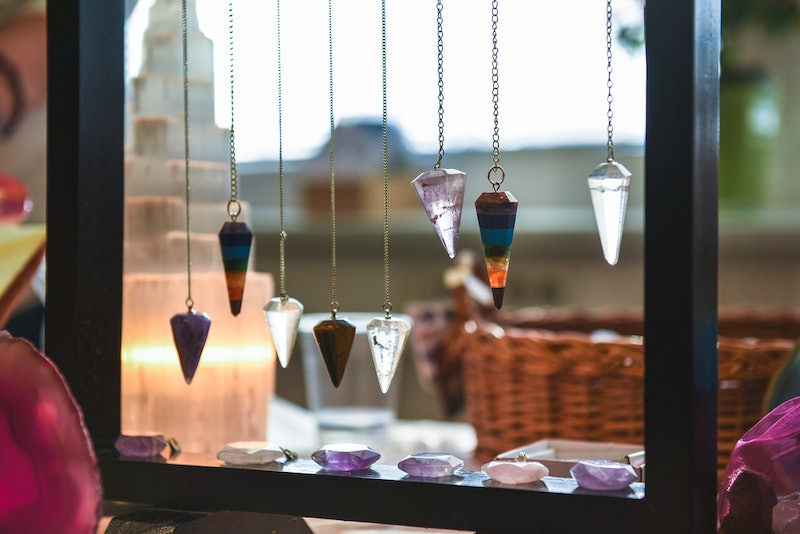 I am a huge fan of the divinatory arts. Tarot and oracle cards, runes, flame gazing, you name it. I've even dabbled with Ouija boards (although I can't in good faith recommend you mess with those unless you take some legit precautions). Crystal pendulum dowsing divination is another fun and fascinating metaphysical art form — and it's considered one of the simplest to use. Whether you interpret divination tools as a way to access a divine higher power or simply as a method of tapping into your inner self, they can be really amazing in helping you sort out your ~true feelings~ and get to the heart of a matter that you're otherwise experiencing confusion over. In fact, one of my best friends used a pendulum to accurately discover the sex of her baby while she was pregnant, and my sister, who is an herbalist, has used them to help decide which flower essences are calling to her on a particular day (her teachers do this, too!). So what is pendulum dowsing and how exactly does this magical divination tool work?

It's pretty simple. A pendulum is essentially just a simple weighted object on a string, and it's used as a channel for energy (this could be your own, someone else's, or the energy of a divine source). It's just one of several forms of "dowsing," which is defined as "a technique for searching for ... anything invisible, by observing the motion of a pointer ... or the changes in direction of a pendulum, supposedly in response to unseen influences." Dowsing has been relied upon for centuries, and was historically used to help people find underground water sources, minerals like gold, and other hidden resources without the use of scientific tools. Pretty trippy, right? And around the 18th century, psychics apparently began using dowsing techniques for more metaphysical purposes. It's reported that Leonardo da Vinci used dowsing tools in his practices, and even Albert Einstein is quoted saying, "The dowsing rod is a simple instrument which shows the reaction of the human nervous system to certain factors which are unknown to us at this time." So it's not just mystics who incorporate these tools into their practice — they've been used successfully by many different types of people for a very long time, and for a wide variety of purposes.

Pendulum dowsing is reportedly one of the most common divinatory arts used today, and is also considered to be one of the simplest. "The pendulum acts as a receiver and transmitter of information, and moves in different ways in response to questions," explains Holistic Shop on its site. "In its most simple form, you can use it to answer questions or aid in decision making." There are several ways to use a pendulum, but all involve asking a question and allowing energy to flow into the pendulum to dictate or move it toward your answer. The pendulum acts as a conduit to this energy.

Bustle spoke with esoteric life coach Chris (Ammo) O'Day, who shares, "[P]endulum work is fantastic for an immediate yes or no question," and that's exactly how it's commonly used by mystics today. The pendulum is held up to hang steadily with the hand, and once an uninterrupted balance is achieved the user can ask a question and wait for a response. Typically, it's believed that if the pendulum begins moving in a clockwise motion, it is signifying a yes — but that all depends on the user's personal relationship with their pendulum (and it's something you'll have to figure out for yourself if you decide to try it!). Some people connect a yes or no answer to their pendulum moving either side to side or back to front rather than rotating in a circular motion — and that's OK, too! Other times, people hold their pendulum above photographs, maps, or even pieces of paper or boards with various answers written out on it (sort of like a Ouija board) that relate to the question being asked. Then, they can either wait for the pendulum to move in the direction of their answer, or they can hold it over each option one by one until they get a yes or no.

While many pendulums are made of crystals, there's actually no need to purchase anything fancy in order to benefit from the divination power of this tool. Any weighted, non-magnetized, symmetrical object hanging by a chain or string can do the trick, so long as it feels right to the user and is at a comfortable length and weight. "I’ve always preferred using a piece of symmetrical jewelry or even a hex nut on a ball chain from the hardware store in a pinch," explains O'Day. The magic of a pendulum is in the energy that it channels, not the object itself, so if you want to try some dowsing before officially investing in one of your own, you can easily do so with no strings attached (well, maybe one string attached — see what I did there?).

If you're ready to embark on a lil' pendulum dowsing of your own, then let's get to it and have some fun with divination. First, you'll want to choose a pendulum that you vibe with and feel comfortable using. Bustle spoke with psychic and witch Renee Watt, who advises, "Like any divination tool, make sure you’re working with a pendulum you’ve bonded with and remember to calibrate and test it before using it in readings." That means that whether you're going out to buy a fancy crystal point pendulum at the metaphysical shop or simply making one DIY-style with a weighted bead and string, you'll want to feel good holding it in your hand (energy is important, y'all!). Since you're using the tool for energy work, it'll also be advisable to cleanse it using sage smoke, a bowl of salt, or even just a night under the moonlight. Then you can charge it with your intentions or meditate with it to form a connection. (Whenever I get a new Tarot deck, I sleep with it under my pillow for a few nights to help me connect with it — this is good practice for a new pendulum, too.)

You'll then want to test it out. Start by making sure you eliminate any outside sources that could affect the movement of the pendulum (for example, make sure you're not sitting in a position that makes it hard to hold your arm still and that there's no open window or other heavy vibrations in your space). Once you find your stillness, it's time to decide exactly how your energies or guides speak to you through the pendulum. Some people know this intuitively as they begin using their pendulum — and if that's the case for you, great! Trust your intuition. If you need some guidance, begin by asking the pendulum simple yes or no questions that you already know the answer to. Eventually, you should feel confident interpreting the pendulum's movements and at that point you can begin using it as a tool to answer questions or point you in the right direction. Experiment with different methods — such as by incorporating other objects or answer keys into your practice.

Of course, as is the case with most divinatory arts, there are naysayers who believe that pendulums are simply a trick of the mind and body. "The scientific community often refers to dowsing rods and pendulums in an effort to discredit psychic ability, using the 'ideomotor' argument, which states a person is subconsciously moving their hand muscles to gain an answer based off suggestion or information they already have," explains Watt. "As a psychic who works with subtle energies daily my response is that when using a pendulum there certainly are subtle movements happening to get an answer. However, I am also channeling and tapped into my psychic ability which leads me to believe that any movements effecting the pendulum are the result of direct communication with my guides."

And truly, whether or not you believe in a great spirit, guides, angels, or anything else, you might still find a pendulum useful — even if it's simply as a tool to connect with your own inner wisdom and intuition. We're only human, and sometimes having a little guidance is a good thing. Whether that's in the form of a Magic 8-Ball or a fancy crystal pendulum is up to you — and I promise I won't judge.