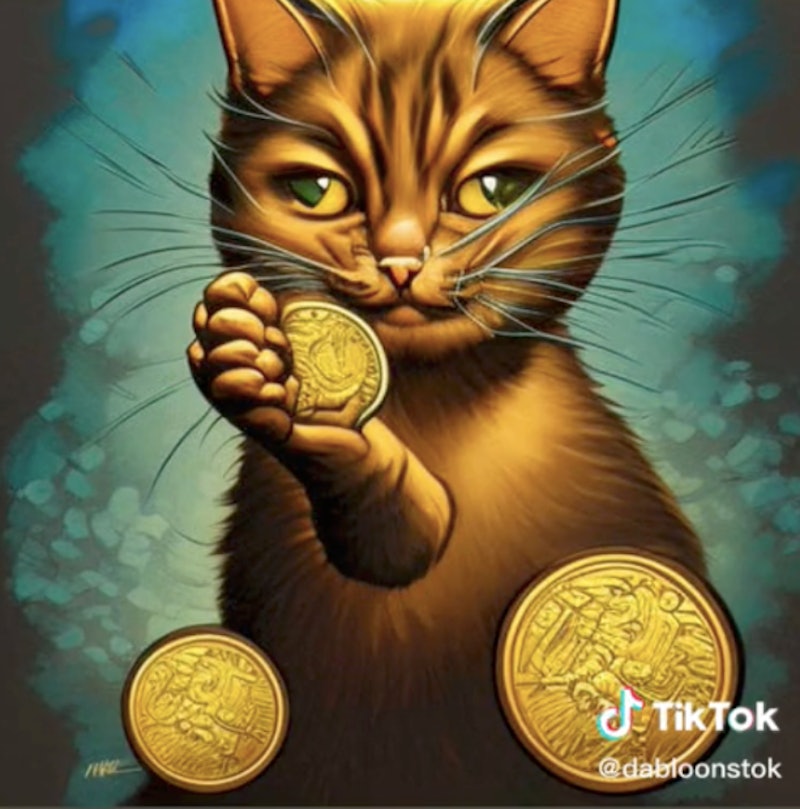 One of the best parts of being chronically online is seeing strangers take something and collectively run with it. Recently, you may have come across a cat-based currency known as dabloons on your TikTok FYP. This trend has gone absolutely viral with the most popular videos garnering millions of views. The dabloons economy is currently experiencing an inflation, but it’s not too late to cash in.

Dabloons originated from the cat meme Instagram account @catz.jpeg in 2021, when the owner posted a fuzzy picture of a black cat holding up its paw with four claws outstretched, simply captioned “4 dabloons”. The term “dabloon” is most likely a humorous bastardisation of the Spanish “doubloon” (which were golden coins that were used in the sixteenth century).

This dabloon meme gained momentum on TikTok when users started posting image sets that usually begin with the greeting “hello traveller”, followed by an offering of items, and ending with the dabloons cat meme to signal that everything up for trade will cost four dabloons. Some of the original items that were involved in dabloon trading included soup, blankets, and potions, though the economy has expanded a lot since then, now incorporating items such as dragons and fighter jets for sale.

There are also TikTokers who have posted seemingly innocent videos starting with the usual “hello traveller”, but followed by a cat robbing the viewer of dabloons. Basically, individual TikToks offer different dabloons, items, or an unpleasant surprise, and the game lies in not being sure what kind of dabloon content you might come across. Remember randomly finding Neopoints or suddenly being pickpocketed by ghosts on Neopets? Yeah, it’s that, but make it Gen Z.

It’s important to note that a dabloons is not a real currency in any form. There is no website, app, or bank to get dabloons from. It is simply a fictional currency created by TikTokers just for the fun of it. Dabloon cat videos will usually grant viewers a number of dabloons, and it is up to the viewer to keep track of how many they have “collected” online so far.

Having said that, although dabloons don’t equate to real money, that doesn’t mean TikTokers aren’t taking the game very seriously, creating elaborate spreadsheets in order to keep track of their dabloon income, deficit, and purchase inventories. For a while, TikTok users were also giving away dabloons in absurd amounts, so the ‘dabloons IRS’ (which is a fictional organisation, just in case that wasn’t clear) has declared that the economy is in massive inflation, thus limiting giveaways to 100 dabloons per video.

This role-playing game that started out as a niche little in-joke may have taken a weirdly capitalist turn, but it’s still great fun to live out fantasy dabloon-based lives in our collective imaginations. And if you have yet to start your own collection, we’ve mentioned dabloons 25 times now, so here you go, traveller!

More like this
Here’s What TikTok's "Mascara” Trend Is *Really* About
By El Hunt
Forestcore Is About To Take Over Your TikTok FYP
By Sam Ramsden
10 Equally Romantic & Heartbreaking Books From British & Irish Authors
By Shahed Ezaydi
Ashamed Of Your Screen Time Stats? Here's How To Change That
By Alexis Morillo
Get The Very Best Of Bustle/UK
Sign up for Bustle UK's twice-weekly newsletter, featuring the latest must-watch TV, moving personal stories, and expert advice on the hottest viral buys.