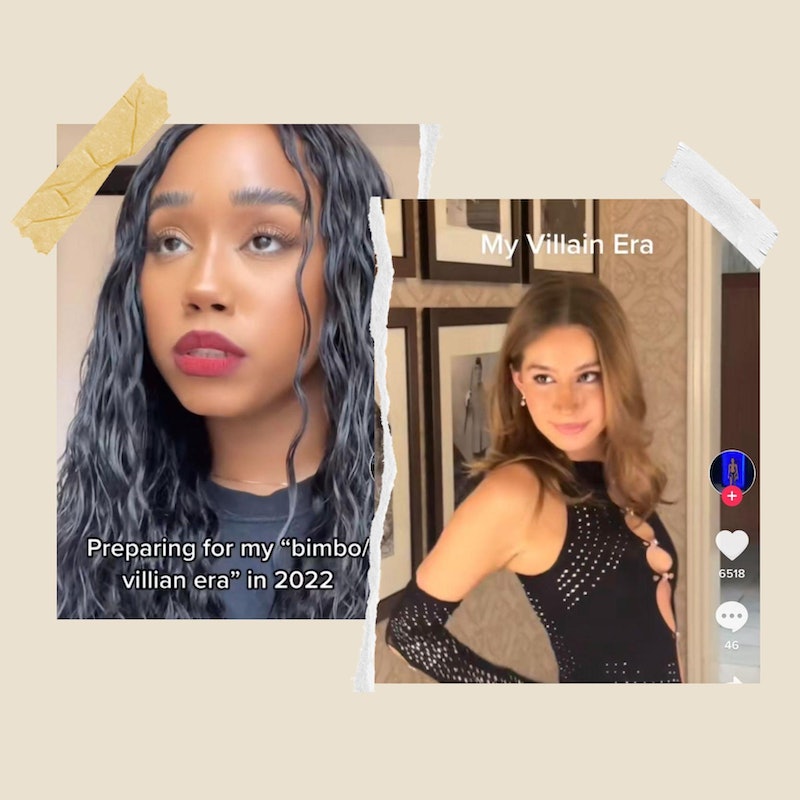 After what feels like ages of “that girl” propaganda telling you to gargle green juice, go bankrupt on matching workout sets, slick your hair to your scalps, and read one book per week, a new era has arrived just in time for a summer of debauchery. “Villain era” is the latest trend sweeping the internet, inviting followers to embrace their most unfiltered form of self preservation.

#VillainEra has over 28M views on TikTok, with more than 63k videos overlaying Cassie Howard’s iconic Euphoria line, “Well if that makes me a villain, then so f*cking be it.” But this new trend didn’t take shape overnight. Its predecessor, “feral,” has been dropping breadcrumbs since February. Both movements are iterations of the “vibe shift,” felt early this year; a shift from clean, green, and motivated, to chaotic, unhinged, and wildly fun. If Emily Mariko was a “that girl” idol, then the “villain era”’s idol looks more like Julia Fox.

In order to gain entry into the “villain era,” you have to read between the lines. It’s not about being an actual villain. This is not a green light to abandon your friends, stop showing up to work, or just generally be a jerk. This era is about choosing yourself, setting boundaries, and really living your life rather than curating it. It's about swapping politeness for a spine, and people pleasing for independence. Don’t work later than you need to just to impress your boss who isn’t paying attention anyways. Ghost the dude who didn’t ask a single question about you over drinks. Don’t drink vodka water because that’s the norm, be honest and order what you want — vodka Redbull.

Some of the voices championing this trend describe the “villain era” as an anticipatory embrace of other people's perception of you, rather than a self-defined identity. One TikToker, @padzdey, warned fellow villains, “Suddenly now there is a disconnect. What someone may be used to, they’re not receiving anymore; and then comes in, being perceived as a villain.”

For life-long people pleasers, the message is clear: Choose yourself and brace for impact.

For those who don’t naturally embody the villain vibe, TikTok is acting as an instructional forum — as it so often does. Users on TikTok are flooding the app with “villain era” content from cutthroat dating advice, to villain vibe spotify playlists, to villainous shopping roundups.

Starting today, be the villain. Reclaim the time and energy that you devote to everyone and everything else, and give it back to yourself. For immediate entry into your “villain era,” log off early and stream “Plan B” by Megan Thee Stallion.