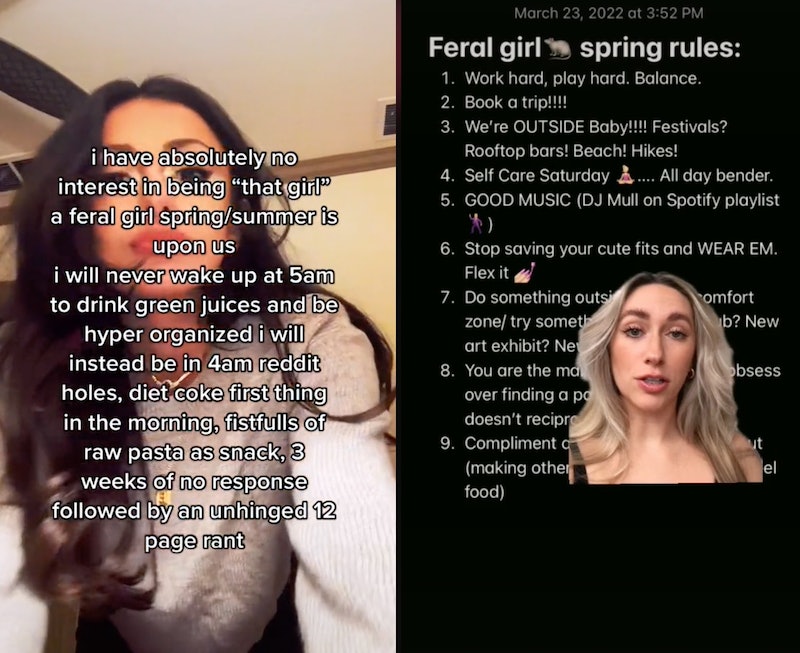 When you think of the word “feral,” you probably think of the neighborhood cat that pulls your old tuna cans out of the trash and scratches its fleas on your stoop — not cool girls on the internet. On TikTok, however, “feral” has received a glow-up after being co-opted as the chaotic alternative to hot girl summer.

On TikTok, being feral means being uninhibited and unapologetically yourself — in the most anarchic way possible. Think: soda for breakfast, last night’s makeup for tonight’s party, the rat emoji, and blurry photo dumps on the grid. If you’ve been following the steady decline in popularity of the heavily filtered “that girl,” the rise of the messy, liberated, drafts girl won’t surprise you.

“I have absolutely no interest in being ‘that girl’. A feral girl spring/summer is upon us,” TikTok user Horrible.Glitter shared on Feb. 23. “I will never wake up at 5 a.m. to drink green juices and be hyper organized. I will instead be in 4 a.m. Reddit holes, Diet Coke first thing in the morning, fistfuls of raw pasta as a snack, three weeks of no response followed by an unhinged 12-page rant.”

According to VICE, the term “feral girl summer” has been floating around on Twitter since 2019, when Lorde released an announcement for her album Solar Power. The announcement included the following text: “There’s someone I want you to meet. Her feet are bare at all times. She’s sexy, playful, feral, and free.” The soft-launch of the term feral resonated with fans, but now, the need for a sexy, playful, feral, and free summer is more potent than ever. With over 200,000 views on videos tagged #feralgirlsummer on TikTok, and nearly 300 million on videos tagged #feral, it’s clear that “feral” is getting a 2022 revival.

Per Merriam-Webster, the literal definition of feral is “of, relating to, or suggestive of a wild beast” or “not domesticated or cultivated.” It’s usually applied to animals, but on TikTok, people are resonating with a desire to loosen their domestic shackles. Sure, perfecting the homemade matcha latte and Goddess Salad was fun, but the women of the internet are ready to log off and flex their wild card — at least on the weekends.

“Trying to figure out how to be a feral club rat until 7 a.m. on the weekends and still be a functional adult during the week because y’all I’m tired...” TikTok user IsThisHannah posted on March 22. “We’re going b@lls to the wall from now until the end of summer,” TikTok user kristina.galvin posted on March 25.

If you didn’t budget for a bouncy blow out or cropped spandex sets this summer, lean into your wild side and grant yourself the feral summer you desire. Meow.

More like this
What Is A “Softboy?” The TikTok Term & Aesthetic, Explained
By Courtney Young
Why Are TikTokers Slapping Each Other With Tortillas?
By Courtney Young
Here’s Why Everyone On TikTok Is Getting “Krissed”
By Courtney Young
American Girl Doll Memes Are Going Viral On Instagram & Tiktok
By Emma Carey
Get Even More From Bustle — Sign Up For The Newsletter